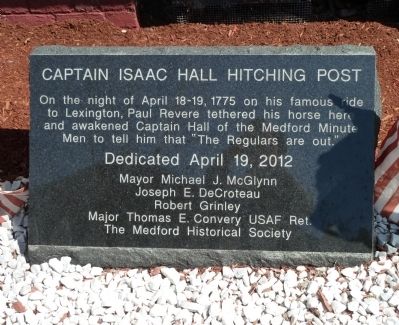 Photographed By Roger W. Sinnott, April 22, 2015
1. Captain Isaac Hall Hitching Post Marker
Inscription.
Captain Isaac Hall Hitching Post. . On the night of April 18-19, 1775, on his famous ride to Lexington, Paul Revere tethered his horse here and awakened Captain Hall of the Medford Minute Men to tell him that "The Regulars are out." . This historical marker was erected in 2012. It is in Medford in Middlesex County Massachusetts

On the night of April 18-19, 1775, on his famous ride to Lexington, Paul Revere tethered his horse here and awakened Captain Hall of the Medford Minute Men to tell him that "The Regulars are out."

Topics. This historical marker is listed in these topic lists: Colonial Era • War, US Revolutionary. A significant historical date for this entry is April 18, 1775.

Location. 42° 25.119′ N, 71° 6.653′ W. Marker is in Medford, Massachusetts, in Middlesex County. Marker is on High Street (Massachusetts Route 60), on the right when traveling west. Touch for map. Marker is at or near this postal address: 43 High Street, Medford MA 02155, United States of America. Touch for directions. 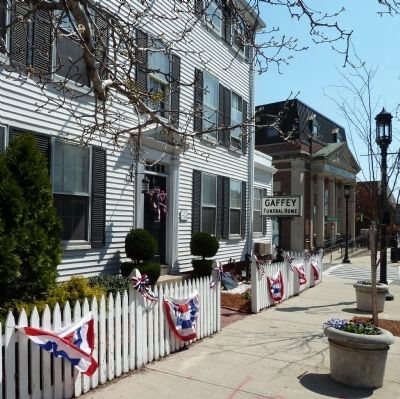 Photographed By Roger W. Sinnott, April 22, 2015
2. Oblique View of Isaac Hall House
The marker, just visible through the open gate, rests on the ground by the front door. According to a passerby, the building has been heavily remodeled at least 10 times since the Revolutionary War. It is currently used by Gaffey Funeral Services.

Click or scan to see
this page online
(approx. one mile away); Powder House (approx. 1.2 miles away). Touch for a list and map of all markers in Medford.

Regarding Captain Isaac Hall Hitching Post. The home of Captain Hall is one block north of the Mystic River. In the poem Paul Revere’s Ride, Henry Wadsworth Longfellow told how Revere crossed this particular river on his way toward Lexington and Concord to warn of the British advance:

It was twelve by the village clock,
When he crossed the bridge into Medford town.
He heard the crowing of the cock,
And the barking of the farmer’s dog,
And felt the damp of the river fog
That rises after the sun goes down. . . .

Revere, with fellow riders William Dawes and Samuel Prescott, would spread the alarm “through every Middlesex village and farm” at the start of the American Revolution. 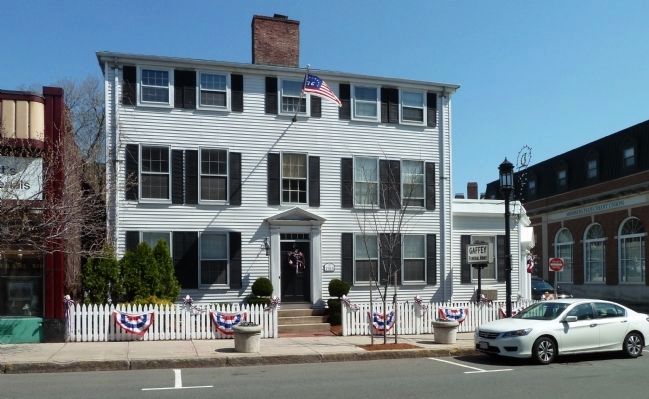