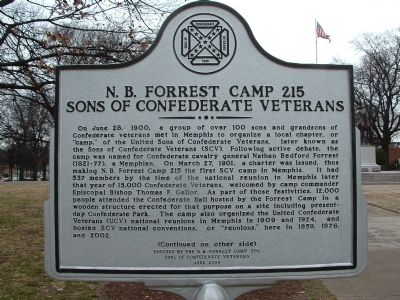 Reverse:
Over the years, many prominent area civic and religious leaders have been members of the camp. SCV 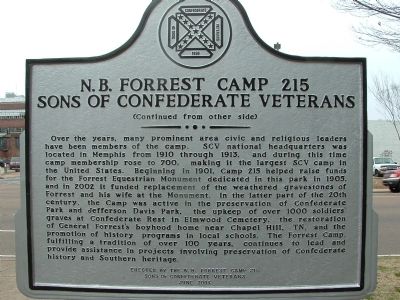 Click or scan to see
this page online
national headquarters was located in Memphis from 1910 through 1913, and during this time camp membership rose to 700, making it the largest SCV camp in the United States. Beginning in 1901, Camp 215 helped raise funds for the Forrest Equestrian Monument dedicated in this park in 1905, and in 2002 it funded replacement of the weathered gravestones of Forrest and his wife in the Monument. In the latter part of the 20th century, the Camp was active in the preservation of Confederate Park and Jefferson Davis Park, the upkeep of over 1000 soldiers' graves at Confederate Rest in Elmwood Cemetery, the restoration of General Forrest's boyhood home near Chapel Hill, TN, and the promotion of history programs in local schools. The Forrest Camp, fulfilling a tradition of over 100 years, continues to lead and provide assistance in projects involving preservation of Confederate history and Southern heritage. 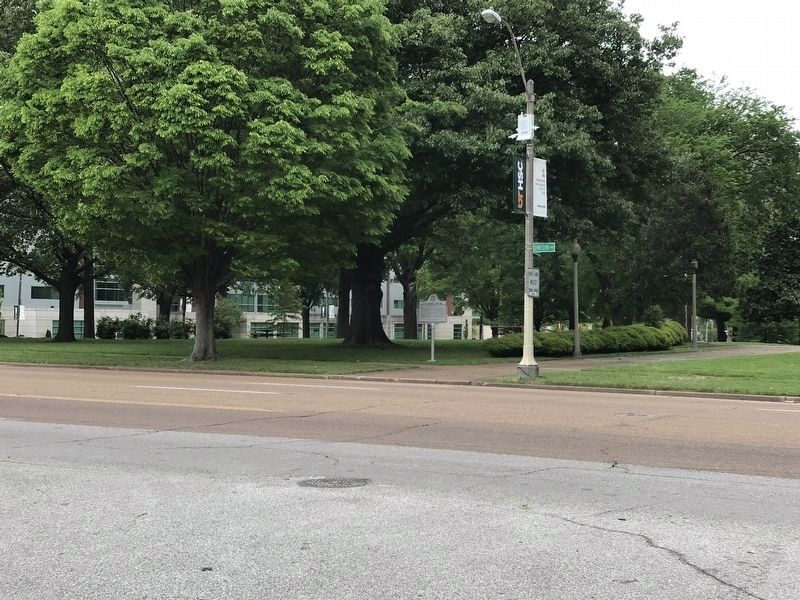 By Duane and Tracy Marsteller, April 25, 2020
3. N. B. Forrest Camp 215 Sons of Confederate Veterans Marker
is on Union Avenue (U.S. 51) west of Dunlap Street, on the right when traveling west. Touch for map. Marker is at or near this postal address: 799 Madison Avenue, Memphis TN 38103, United States of America. Touch for directions.

Other nearby markers. At least 8 other markers are within walking distance of this marker. Nathan Bedford Forrest III, Airman (within shouting distance of this marker); Memphis City Hospital (about 600 feet away, measured in a direct line); Elvis Presley and Sun Records / Sun Records (approx. 0.2 miles away); Campbell Clinic (approx. 0.2 miles away); Lowenstein Mansion (approx. 0.3 miles away); Russwood Park (approx. 0.3 miles away); The First Railroad in West Tennessee (approx. 0.3 miles away); Luke Edward Wright (approx. 0.4 miles away). Touch for a list and map of all markers in Memphis.
Credits. This page was last revised on April 28, 2020. It was originally submitted on January 13, 2012, by Ken Smith of Milan, Tennessee. This page has been viewed 1,114 times since then and 95 times this year. Last updated on May 3, 2015, by J. Makali Bruton of Querétaro, Mexico. Photos:   1, 2. submitted on January 13, 2012, by Ken Smith of Milan, Tennessee.   3. submitted on April 27, 2020, by Duane Marsteller of Murfreesboro, Tennessee. • Bill Pfingsten was the editor who published this page.
Share this page.