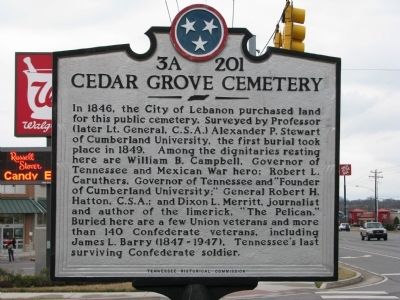 Topics and series. This historical marker is listed in these topic lists: Cemeteries & Burial Sites • War, US Civil. In addition, it is included in the Tennessee Historical Commission series list. 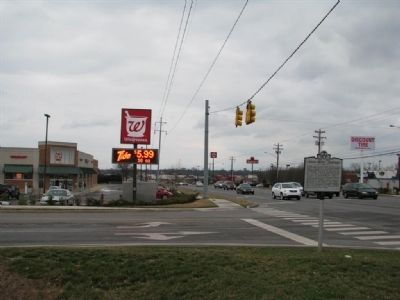 By Tom Gillard, March 13, 2010
2. Cedar Grove Cemetery Marker
, in Wilson County. Marker is on Cumberland Street (U.S. 231), on the right when traveling south. Touch for map. Marker is in this post office area: Lebanon TN 37090, United States of America. Touch for directions.

Regarding Cedar Grove Cemetery. Dixon Lanier Merritt (1879 – 1972) was a poet and humorist. He was a newspaper editor for the Tennessean, Nashville's morning paper, and President of the American Press Humorists Association. He penned this well-known limerick in 1910:[1]
A wonderful bird is the pelican,
His bill will hold more than his belican,
He can take in his beak
Enough food for a week
But I'm damned if I see how the helican!
or
A funny old bird is a pelican.
His beak can hold more than his bellican.
Food for a week
He can hold in his beak,
But I don't know how the hellican. 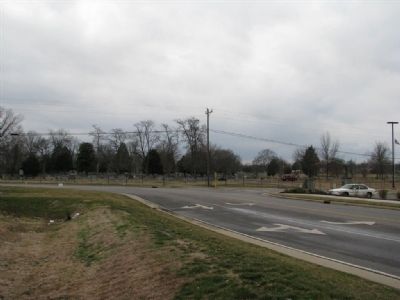 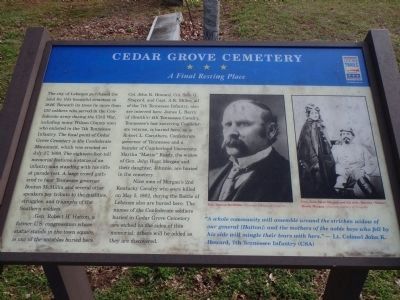