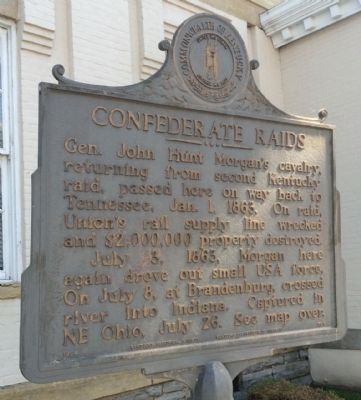 Rear Map
Confederate Raids and Invasions
and a Federal Retreat, in Kentucky.

Topics and series. This historical marker is listed in these topic lists: Railroads & Streetcars • War, US Civil • Waterways & Vessels. In addition, it is included in the Kentucky Historical Society series list. 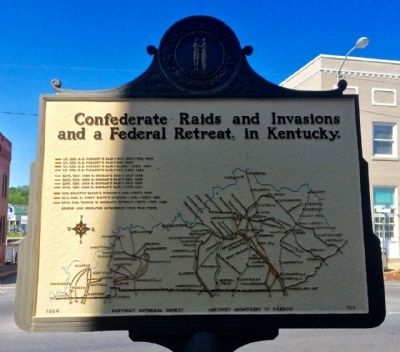 By Mark Hilton, May 8, 2015
2. Confederate Raids Marker (Rear map)
right when traveling south on Public Square. Touch for map. Marker is at or near this postal address: 424 Public Square, Columbia KY 42728, United States of America. Touch for directions.

Other nearby markers. At least 8 other markers are within walking distance of this marker. Adair County Revolutionary War Memorial (here, next to this marker); Adair County Courthouse (a few steps from this marker); Col. Frank L. Wolford (a few steps from this marker); Jane Lampton Home (within shouting distance of this marker); Frank Lane Wolford (about 700 feet away, measured in a direct line); Columbia-Union Presbyterian Church (approx. 0.2 miles away); Daniel Trabue (1760-1840) (approx. ¼ mile away); Male and Female School Site / Student Parking in the 1850s (approx. ¼ mile away). Touch for a list and map of all markers in Columbia.

Additional comments.
1. Marker restored and repainted.
Adair County Historical Association member, Ed Vincent, restored and repainted this marker for its re-unveiling on May 2nd, 2018 in Columbia. Mr. Vincent has restored other markers in the county as well and is in demand by other counties.
— Submitted May 3, 2018, by Mark Hilton of Montgomery, Alabama. 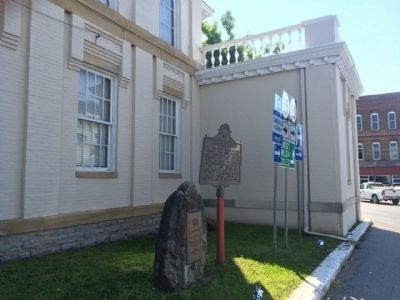 By Mark Hilton, May 8, 2015
3. Area photo of courthouse and marker.
Next to the marker is a stone celebrating the Revolutionary Soldiers who settled the county. 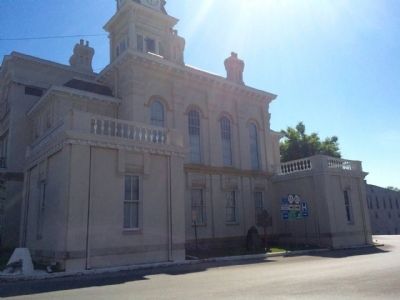 Editor’s want-list for this marker. Photo of both sides of the repainted marker. • Can you help?
Share This Page.