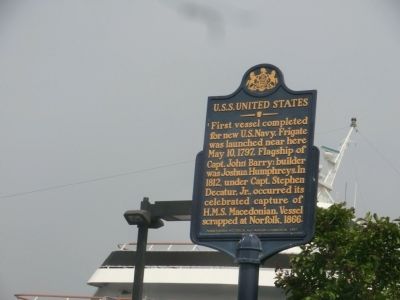 By Don Morfe, May 16, 2015
1. U.S.S. United States Marker
Inscription.
U.S.S. United States. . First vessel completed for new U.S. Navy. Frigate was launched near here May 10, 1797. Flagship of Capt. John Barry; builder was Joshua Humphreys. In 1812, under Capt. Stephen Decatur, Jr., occurred its celebrated capture of H.M.S. Macedonian. Vessel scrapped at Norfolk, 1866. . This historical marker was erected in 1983 by Pennsylvania Historical & Museum Commission. It is in Philadelphia in Philadelphia County Pennsylvania 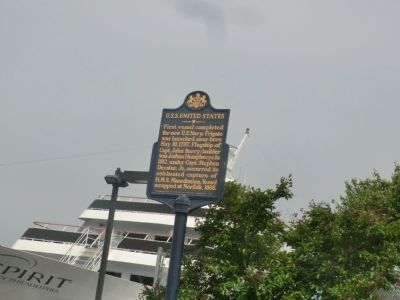 Also see . . .  American sailors humiliate their English counterparts in ship-to-ship battle. A brief synopsis of the USS United States vs. HMS Macedonian battle by the National Park Service: After capturing the British frigate Macedonian in a brutal engagement, Stephen Decatur and his crew came home to a hero’s welcome, sharing $300,000 in prize money. Though strategically insignificant, the loss of the Macedonian was a major blow to the Royal Navy’s prestige and aura of invincibility. (Submitted on May 20, 2015.) 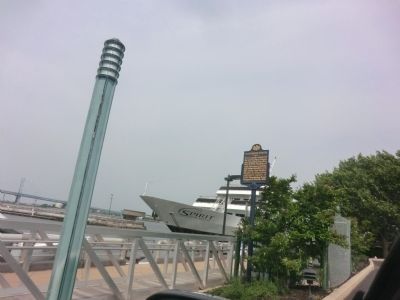 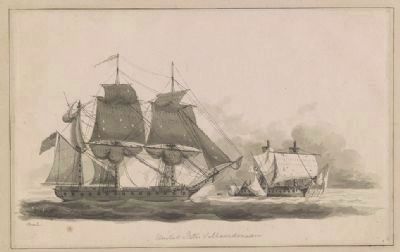 By Thomas Birch, circa 1813
4. United States & Macedonian
Pen and ink drawing, image courtesy of the Library of Congress.

The capture of HMS Macedonian was a naval action fought near Madeira on 25 October 1812 between the frigates USS United States, commanded by Stephen Decatur, and HMS Macedonian, under the command of John Surman Carden. The American vessel won the long bloody battle, capturing and bringing the Macedonian back to the United States. It was the first British warship to ever be brought into an American harbor. - Wikipedia 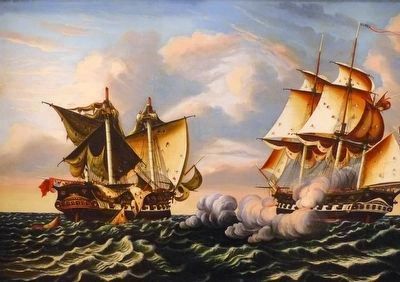 By Allen C. Browne, February 16, 2015
5. Capture of HMS Macedonian by U.S. Frigate United States,
October 25, 1812
This 1852 painting of the battle between the United States and the Macedonian by Thomas Chambers hangs in the Smithsonian American Art Museum in Washington, DC.
More. Search the internet for U.S.S. United States.