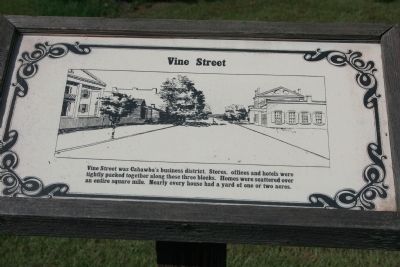 By Tim Carr, August 15, 2009
1. Vine Street Marker
Inscription.
Vine Street was Cahawba's business district. Stores, offices and hotels were tightly packed together along these three blocks. Homes were scattered over an entire square mile. Nearly every house had a yard of one or two acres. . This historical marker was erected by Alabama Historical Commission. It is in Cahaba in Dallas County Alabama

Vine Street was Cahawba's business district. Stores, offices and hotels were tightly packed together along these three blocks. Homes were scattered over an entire square mile. Nearly every house had a yard of one or two acres.

Location. 32° 19.038′ N, 87° 5.796′ W. Marker is in Cahaba, Alabama, in Dallas County. Marker is at the intersection of Vine Street and Capitol Avenue, on the right when traveling north on Vine Street. Touch for map. Marker is in this post office area: Orrville AL 36767, United States of America. Touch for directions. 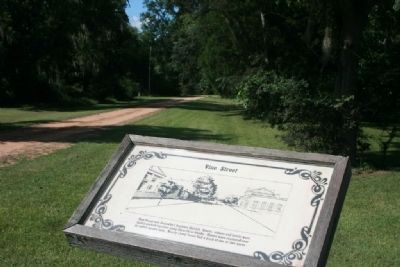 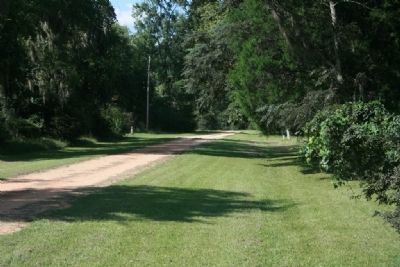 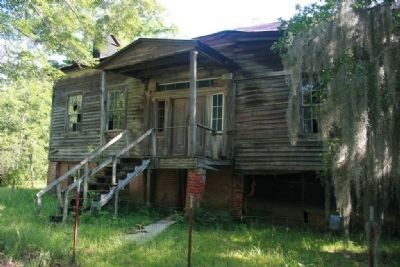 By Tim Carr, August 15, 2009
4. The Last Remaining Original Home In Cahaba
Fambro/ Arthur Home was built in the early 1840s by W.W. Fambro but parts of this home could date back to the Capitol Era (1819-1826). Fambro sold the house in 1855 to a D. S. Troy. When D. S. Troy's wife died in 1856 he then sold the house to a John D. Williams in 1857. J. D. Williams lived in the house up till 1866 after his wife died he sold the home to a T. J. Portis. T. J. Portis then sold the home to a William Bell. Ezekiel Arthur who was born into slavery bought the house in 1894 from Mary Bell for $2,000. The Arthur family continued to live in the house until the late 1990's. Currently the Alabama Historical Commission is working on stabilizing the structure from collapsing. This is one of only two antebellum structures still standing in the town of Cahaba, Alabama. Located on the corner of 1st North Street and Oak Street in what was downtown Cahaba.
Credits. This page was last revised on November 2, 2019. It was originally submitted on October 14, 2009, by Timothy Carr of Birmingham, Alabama. This page has been viewed 1,769 times since then and 5 times this year. Last updated on May 20, 2015, by J. Makali Bruton of Querétaro, Mexico. Photos:   1, 2, 3, 4. submitted on October 14, 2009, by Timothy Carr of Birmingham, Alabama. • Bernard Fisher was the editor who published this page.
Share This Page.