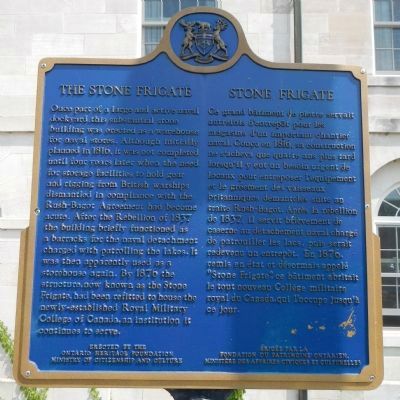 English:
Once part of a large and active naval dockyard, this substantial stone building was erected as a warehouse for naval stores. Although initially planned in 1816, it was not completed until four years later when the need for storage facilities to hold gear and rigging from British warships dismantled in compliance with the Rush-Bagot Agreement had become acute. After the Rebellion of 1837 the building briefly functioned as a barracks for the naval detachment charged with patrolling the lakes. It was then apparently used as a storehouse again. By 1876 the structure, now known as the Stone Frigate, had been refitted to house the newly-established Royal Military College of Canada, an institution it continues to serve. 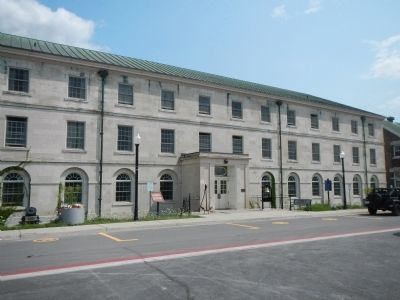 Erected by Ontario Heritage Foundation, Ministry of Citizenship and Culture.

More about this marker. The Stone Frigate in on the grounds of Royal Military College of Canada on the east side of Parade Square. 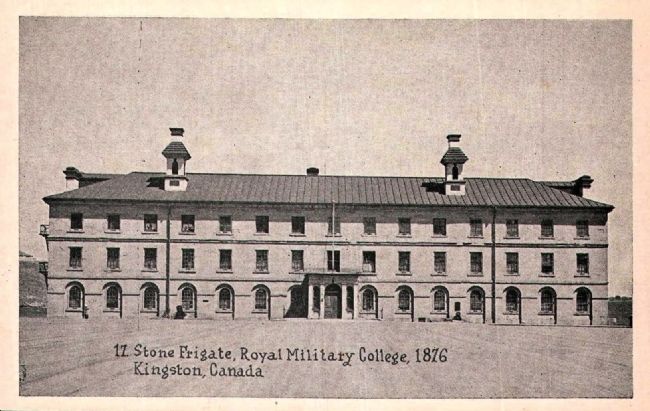 Postcard by the Fort Henry Management, circa 1876
3. Stone Frigate, Royal Military College, 1876, Kingston, Canada
Royal Military College of Canada as "The Boat", the Stone Frigate houses 1 Squadron, who in turn call themselves the Stone Frigate Military Academy. Renovations to the Stone Frigate began in the summer of 2003; some interior refinishing had taken place in the mid-1960s, however the overall interior condition of the building was poor. Interior stone walls were restored and cleaned and new structural supports and interior walls were constructed. Windows, doors, and mechanical and electrical services were installed and an annex extension was built. The Department of National Defence officially re-opened the renovated Stone Frigate building in early April 2004. The Stone Frigate is on the Registry of Historic Places of Canada. (Submitted on May 22, 2015, by Barry Swackhamer of Brentwood, California.)