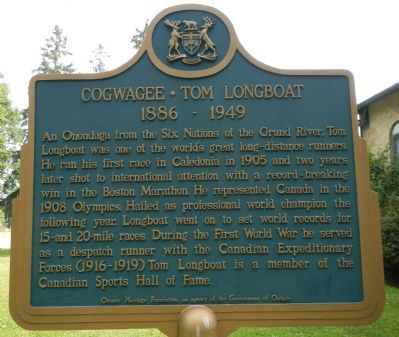 English:
An Onondaga from the Six Nations of the Grand River, Tom Longboat was one of the world's great long-distance runners. He ran his first race in Caledonia in 1905 and two years later shot to international attention with a record-breaking win in the Boston Marathon. He represented Canada in the 1908 Olympics. Hailed as professional world champion the following year, Longboat went on to set world records for 24 and 32 km races. During the First World War he served as a despatch runner with the Canadian Expeditionary Forces (1916-1919). Tom Longboat is a member of the Canadian Sports Hall of Fame. 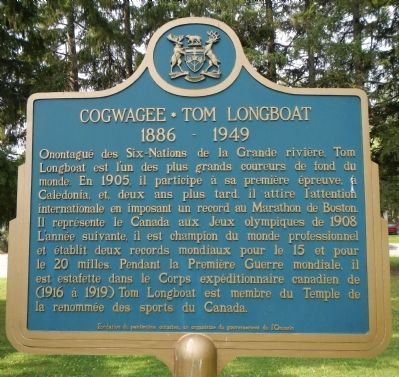 Erected by Ontario Heritage Foundation, an agency of the Government of Ontario.

Topics. This historical marker is listed in these topic lists: Native Americans • Sports. A significant historical year for this entry is 1905.

More about this marker. The marker is located near the old Six Nation Council House.

Also see . . .  Tom Longboat - Wikipedia. When Longboat was a child, a Mohawk resident of the reserve, 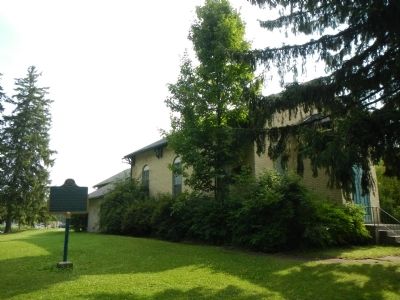 By Barry Swackhamer, August 11, 2014
3. Cogwagee • Tom Longboat Marker
Bill Davis, who in 1901 finished second in the Boston Marathon, interested him in running races. He began racing in 1905, finishing second in the Victoria Day race at Caledonia, Ontario. His first important victory was in the Around the Bay Road Race in Hamilton, Ontario in 1906, which he won by three minutes. In 1907 he won the Boston Marathon in a record time of 2:24:24 over the old 24-1/2 mile course, four minutes and 59 seconds faster than any of the previous ten winners of the event... (Submitted on May 25, 2015, by Barry Swackhamer of Brentwood, California.) 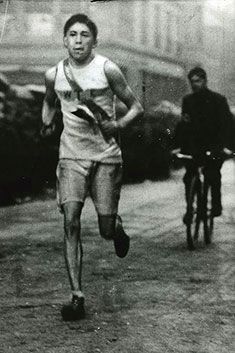