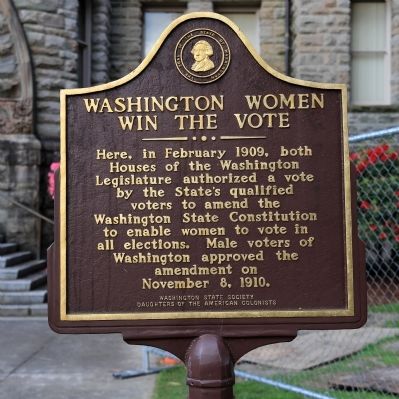 Here, in February 1909, both Houses of the Washington Legislature authorized a vote by the State’s qualified voters to amend the Washington State Constitution to enable women to vote in all elections. Male voters of Washington approved the amendment on November 8, 1910.

Erected by Washington State Society, Daughters of the American Colonists.

Topics and series. This historical marker is listed in these topic lists: Government & Politics • Notable Events • Women. In addition, it is included in the Daughters of the American Colonists series list.

Location. 47° 2.567′ N, 122° 54′ W. Marker is in Olympia, Washington, in Thurston County. Marker is on Washington Street SE south of Legion Way SE, on the left when traveling south. It is in front of the old Capitol building, across from Sylvester Park. Touch for map. Marker is in this post office area: Olympia WA 98501, United States of America. Touch for directions. 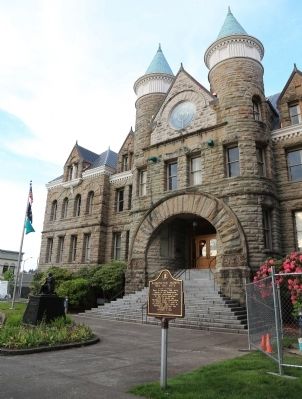