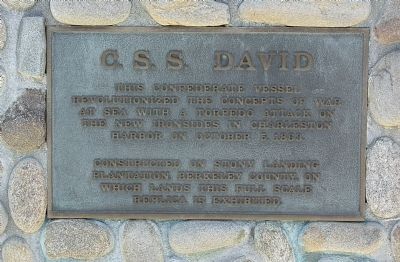 By Mike Stroud, 2009
1. CSS David Marker
Inscription.
C.S.S. David. . This Confederate vessel revolutionized the concepts of war at sea with a torpedo attack on the New Ironsides in Charleston Harbor on October 5, 1863. , Constructed on Stoney Landing Plantation, Berkeley County, on which lands this full scale replica is exhibited. . This historical marker is in Moncks Corner in Berkeley County South Carolina

This Confederate vessel revolutionized the concepts of war at sea with a torpedo attack on the New Ironsides in Charleston Harbor on October 5, 1863.

Constructed on Stoney Landing Plantation, Berkeley County, on which lands this full scale replica is exhibited.

Topics. This memorial is listed in these topic lists: War, US Civil • Waterways & Vessels. A significant historical date for this entry is October 5, 1863. 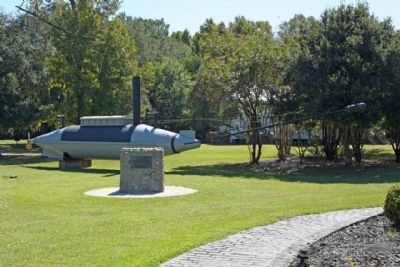 Regarding C.S.S. David. David's last confirmed action came on April 18, 1864 when she tried to sink the screw frigate USS Wabash. Alert lookouts on board the blockader sighted David in time to permit the frigate to slip her chain, avoid the attack, and open fire on the torpedo boat. Neither side suffered any damage.


The ultimate fate of David is uncertain. Several torpedo boats of this type fell into Union hands when Charleston was captured in February 1865. David may well have been among them.

Also see . . .  CSS David, Wikipedia entry. CSS David was built as a private venture by T. Stoney at Charleston, South Carolina in 1863, and put under the control of the Confederate States Navy. The cigar-shaped boat carried a 60- or 70-pound explosive charge on the end of a spar projecting forward from her bow. Designed to operate very low in the water, David resembled 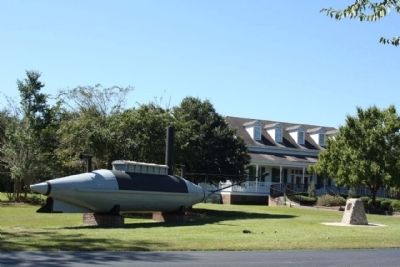 By Mike Stroud, September 29, 2009
3. C.S.S. David Marker
in general a submarine; she was, however, strictly a surface vessel. Operating on dark nights, and using anthracite coal which burns without smoke, "David" was nearly as hard to see as a true submarine. (Submitted on October 5, 2009, by Mike Stroud of Bluffton, South Carolina.) 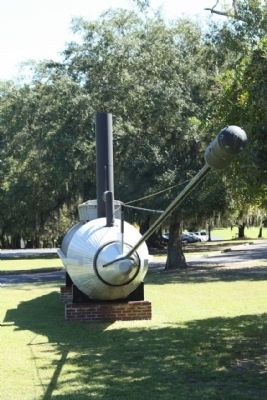 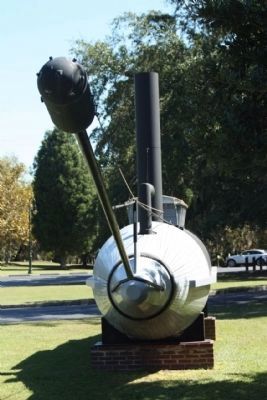 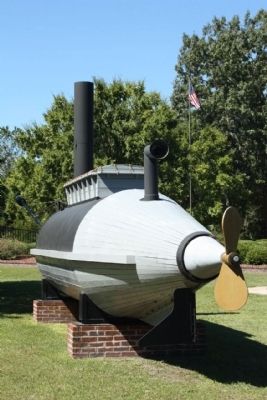 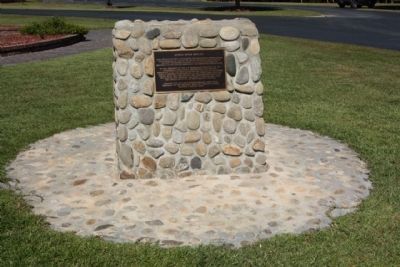 By Mike Stroud, September 29, 2009
7. C.S.S. David Marker, Reverse side text
Little David Replica
This replica of the Little David was originally constructed as an historical exhibit in 1970 by students and staff at Trident Technical College in North Charleston in preparation for South Carolina's Tricentennial observance.
In 2004, members of the U.S. Submarine Veterans Inc. of Charleston completely refurbished the replica, restoring it to the specifications and details of the Little David's original construction in 1863. More than 5,000 man hours went into the effort. The organization maintains the exhibit and provides speakers to groups who visit the display to study its rich nautical history.
Funding for this restoration project came from proceeds of the Berkeley Museum's annual Antique Tractor & Engine Show. 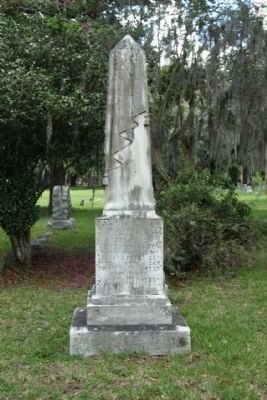