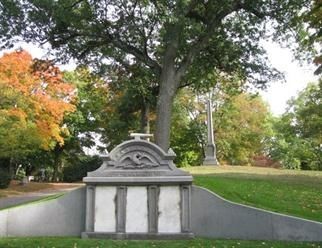 From Website, circa 2014
1. Newton Civil War Soldiers' Monument
Inscription.
Civil War Soldiers Monument. . . In memoriam perpetuam, 1864 Pro patria mortui sunt (“they have died for their country”) . This monument was erected in 1864. It is in Newton in Middlesex County Massachusetts

In memoriam perpetuam, 1864 Pro patria mortui sunt (“they have died for their country”)

Topics. This memorial monument is listed in these topic lists: Cemeteries & Burial Sites • War, US Civil.

Location. 42° 19.965′ N, 71° 12.58′ W. Marker is in Newton, Massachusetts, in Middlesex County. Memorial is at the intersection of Walnut Street and Elm Street on Walnut Street. Marker is in the Newton Cemetery. Once inside the Cemetery from Walnut Street, bear left at the fork and proceed straight about 100 yards. The obelisk will be on the small hill right in front of you. Touch for map. Marker is in this post office area: Newton Center MA 02459, United States of America. Touch for directions.

More about this monument. This monument was recently renovated for its sesquicentennial. It is one of the oldest in Massachusetts, having been erected before the war ended.

Editor’s want-list for this marker. A closeup and a wide shot of the marker and its surroundings. Also, a photo of the entablature bearing the 61 names (which is down the hill to the right) • Can you help?
Share This Page.