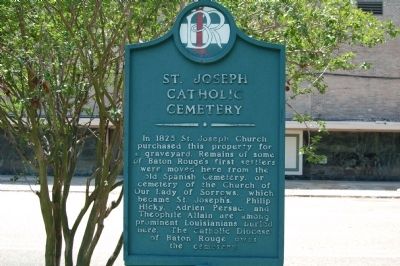 In 1825 St. Joseph Church purchased this property for a graveyard. Remains of some of Baton Rouges's first settlers were moved here from the old Spanish Cemetery, or cemetery of the Church of Our Lady of Sorrows, which became St. Joseph's. Philip Hicky, Adreen Persac, and Theophile Allain are among prominent Louisianians buried here. The Catholic Diocese of Baton Rouge owns the cemetery.