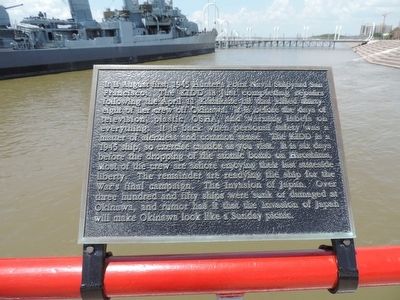 Panel 1:
It is August first, 1945, Hunter's Point Naval Shipyard, San Francisco. The KIDD is just completing repairs following the April 11 Kamikaze hit that killed thirty-eight of her crew off Okinawa. It is before the days of television, plastic, OSHA, and warning labels on everything. It is back when personal safety was a matter of alertness and common sense. The KIDD is a 1945 ship, so exercise caution as you visit. It is six days before the dropping of the atomic bomb on Hiroshima. Most of the crew are ashore enjoying their last stateside liberty. The remainder are readying the ship for the War’s final campaign, the Invasion of Japan. Over three hundred and fifty ships were sunk or damaged at Okinawa, and rumor has it that the Invasion of Japan will make Okinawa look like a Sunday picnic.

Panel 2:
In memory of the officers and men of the USS KIDD who gave their lives in the action of 11 April 1945 off Okinawa: 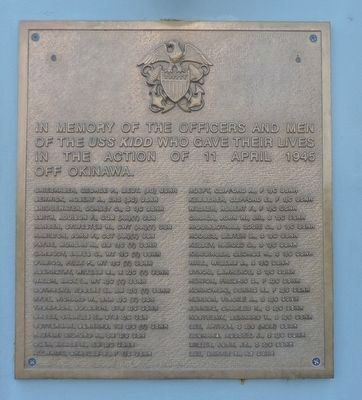 Topics. This memorial is listed in these topic lists: War, World II • Waterways & Vessels. A significant historical month for this entry is April 1932.

Location. 30° 26.624′ N, 91° 11.477′ W. Marker is in Baton Rouge, Louisiana, in East Baton Rouge Parish. Memorial can be reached from the intersection of South River Street and Government Street (Louisiana Highway 73), on the left when traveling north. Marker Panel 1 is on the foot bridge connecting the museum and the KIDD's riverside moorings. Panel 2 is on her starboard side bulkhead, main deck, aft. Touch for map. Marker is at or near this postal address: 305 S River Rd, Baton Rouge LA 70802, United States of America. Touch for directions.

More about this marker. The ship and museum are on the eastern bank of the Mississippi River, north of Interstate 10 and the Louisiana Veterans Memorial Bridge, south of the state capitol and major government buildings in Baton Rouge.