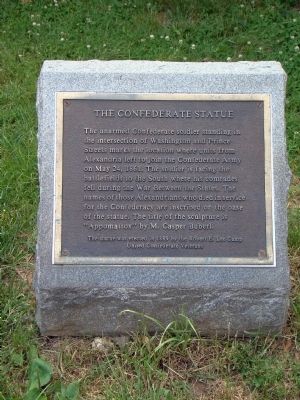 By J. J. Prats, June 28, 2008
1. The Confederate Statue Marker
Inscription.
The Confederate Statue. . The unarmed Confederate soldier standing in the intersection of Washington and Prince Streets marks the location where units from Alexandria left to join the Confederate Army on May 24, 1861. The soldier is facing the battlefields to the South where his comrades fell during the War Between the States. The names of those Alexandrians who died in service for the Confederacy are inscribed on the base of the statue. The title of the sculpture is “Appomattox” by M. Casper Buberl. . The statue was erected in 1889 by the Robert E. Lee Camp, United Confederate Veterans. . This historical marker is in Historical District in Alexandria Virginia

The unarmed Confederate soldier standing in the intersection of Washington and Prince Streets marks the location where units from Alexandria left to join the Confederate Army on May 24, 1861. The soldier is facing the battlefields to the South where his comrades fell during the War Between the States. The names of those Alexandrians who died in service for the Confederacy are inscribed on the base of the statue. The title of the sculpture is “Appomattox” by M. Casper Buberl.

The statue was erected in 1889 by the Robert E. Lee Camp, United Confederate Veterans.

Location. Marker has been permanently removed. It was located near 38° 48.236′ N, 77° 2.833′ W. Marker was in the Historical District in Alexandria, Virginia. Marker was at the intersection of South Washington Street (Virginia Route 400) and Prince Street, on the right when traveling south 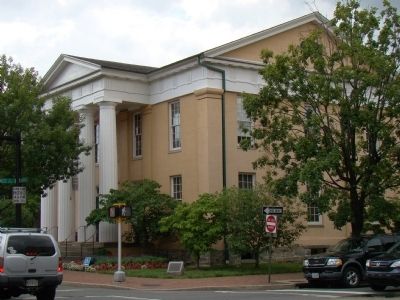 Click or scan to see
this page online
on South Washington Street. Marker was on the southwest corner, at the Lyceum. Statue was in the middle of the intersection. Touch for map. Marker was in this post office area: Alexandria VA 22314, United States of America. Touch for directions.

Regarding The Confederate Statue. From the Smithsonian Institution Research Information System: “The Robert E. Lee Camp introduced legislation into the Virginia House of Delegates, Jan. 9, 1890, to ensure that the statue would never be moved from its location, in the middle of the intersection of Prince and South Washington Streets. Numerous attempts were made in the late 20th century to remove the statue on the grounds either that it was an offensive reminder of slavery, or simply that its location in the middle of an intersection was impractical. After the base had suffered nicks from passing automobiles for several years, 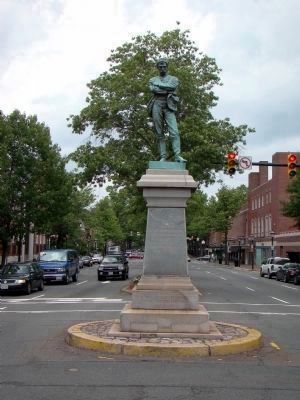 By J. J. Prats, June 28, 2008
3. The Confederate Monument “Appomattox”
Inscription reads “Erected to the memory of the Confederate dead of Alexandria Va. by their surviving comrades, May 24th, 1889.” On the base it reads “This monument marks the spot from which the Alexandria troops left to join the Confederate forces. May 24, 1861.”
a van hit the monument in Aug. 1988 and knocked the statue off its base. The statue and base were temporarily relocated while the base was restored. After much controversy over whether the statue should be permanently relocated, the statue and base were reinstalled at their original location.

“The statue was designed by John Adams Elder, modeled after the figure in his painting ‘Appomattox,’ which depicts a Confederate soldier viewing the battlefields after the surrender of General Robert E. Lee at Appomattox, Virginia on April 9, 1865.”

Also see . . .
1. Confederate “Appomattox” Memorial in Alexandria, Virginia. Short essay and photographs by Willard Sturgill. “To ensure that the statue would not be moved at some future date, the UCV had legislation introduced into the Virginia House of Delegates which passed on January 9th, 1890 and which reads in part: ‘And whereas it is the desire of the said Robert E. Lee camp of Confederate Veterans and also the citizens and inhabitants of said City of Alexandria that such a monument shall remain in its present position as a perpetual and lasting testimonial to the courage, fidelity and patriotism of the heroes in whose memory it was erected… the permission so given by the said City Council of Alexandria for its erection shall not be repealed, 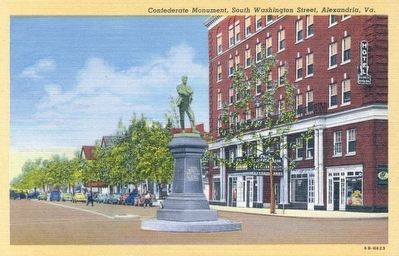 J. J. Prats Postcard Collection
4. Confederate Monument, South Washington Street, Alexandria, Va.
1946 postcard has no legend on back. It is a "genuine Curteich-Chicago ‘C.T. Art-Colorone’ post card" in the B.S. Reynolds Co. (Washington D.C.) scenic art series, No. 6 B-H623. Compare with Photo 5.
revoked, altered, modified, or changed by any future Council or other municipal power or authority.’ ” (Submitted on June 28, 2008.)

2. Confederate Monument Postcards. Postcards in the Alexandria Public Library collection. Click on each image to enlarge. (Submitted on June 28, 2008.)

3. The Confederate Statue. “The dedication ceremony was held on May 24, 1889. Virginia Governor Fitzhugh Lee, formerly a major general of cavalry in the Army of Northern Virginia and a nephew of General Robert E. Lee, delivered the dedicatory address. The Alexandria Gazette recorded the event: ‘The population was soon doubled by the large influx of visitors and former residents from every part of the compass. . . In addition to the extraordinarily large number landed by boat, parties from the neighboring counties in carriages and all sorts of vehicles poured into the streets from early morning and by noon the neighborhood of the statue was packed by a huge mass of humanity.’ ” (Submitted on June 28, 2008.)

Additional commentary.
1. List of Names on Base of Statue
(west side)
Seventeenth Virginia Infantry 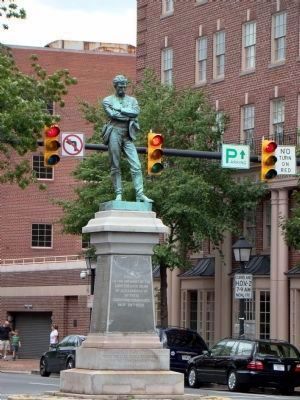 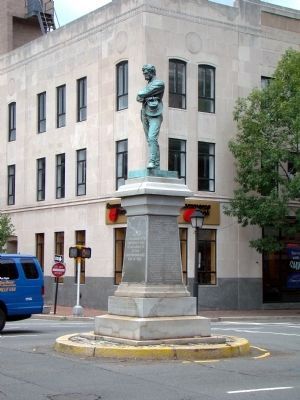 James W. Jackson’s name was added to the east side of the statue in 1900. He was the proprietor of the Marshall House who was killed on May 24, 1861, during the occupation of the city.
— Submitted June 28, 2008.
2. Attempt to relocate statue.
In September 2016, the Alexandria Town Council voted to move this statue from its busy crossroads to the nearby Alexandria History Museum - The Lyceum. The state legislature, a few months later, told the council that there was no reason to think the legislature would approve an exemption from a state law that prohibits the relocation of war memorials.

The statue has long been a sore point for some 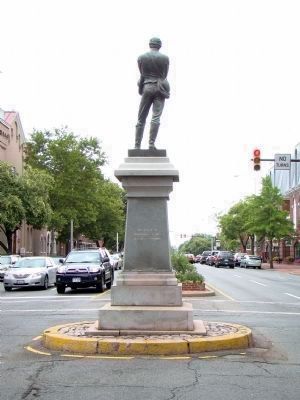 By J. J. Prats, June 28, 2008
7. The Confederate Soldier Faces South
Inscription on north face of base reads “They died in the consciousness of duty faithfully performed.”
Alexandria residents, who say it glorifies the army that fought to retain slavery in the Civil War. Others call it a legitimate historical marker, occupying the spot where a local regiment mustered to retreat from the city just before Union troops seized Alexandria in 1861.
— Submitted February 6, 2017, by Mark Hilton of Montgomery, Alabama. 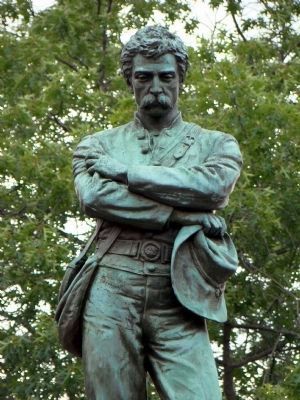 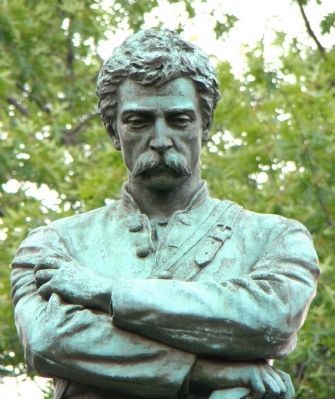 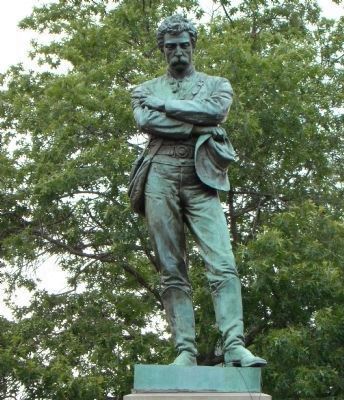