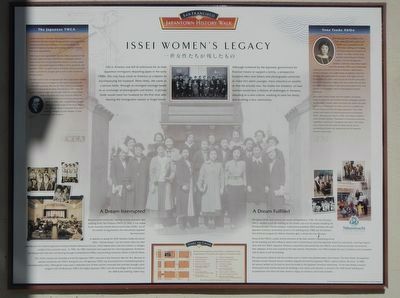 Life in America was full of unknowns for an Issei (Japanese immigrant) departing Japan in the early l900s. She may have come to America as a laborer or accompanying her husband. More likely, she came as a picture bride through an arranged marriage based on an exchange of photographs and letters. A picture bride would meet her husband for the first time after clearing the immigration station at Angel Island.

Although screened by the Japanese government for financial means to support a family, a prospective husband often sent letters and photographs contrived to make him seem younger, more attractive or wealthier than he actually was. No matter her situation, an Issei woman would face a lifetime of challenges in America: adapting to a new culture, working to raise her family and building a new community. 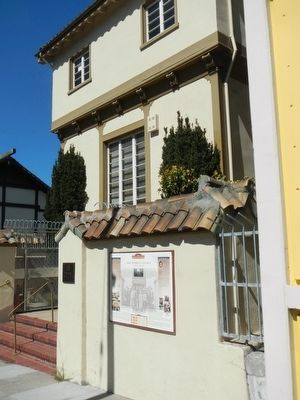 Click or scan to see
this page online
but barred from full participation and use of the facilities by segregation policies, Issei women from the local Japanese Christian churches established an independent Japanese YWCA in 1912. Eventually, the Japanese YWCA's programs grew to include cultural, social and athletic activities for younger girls as well as their service for young women.

The Issei women soon recognized that their organization needed a permanent home and began to raise funds to purchase the 1830 Sutter property. Because the Alien Land Law prevented them from buying the property themselves, in 1921 the Issei women created a legal trust through which the property was held in the name of the San Francisco YWCA for the benefit of the true purchaser, the Japanese YWCA. In 1932, after a fundraising campaign conducted at the height of the Great Depression, the Issei women dedicated the present building, designed by Julia Morgan, to their community and its future.

A Dream Interrupted (bottom left)
Because of the Internment, the Issei women entrusted their building to the San Francisco YWCA. In 1942, it was leased to the American Friends Service Committee (AFSC), one of the handful of organizations that had actively opposed the Internment.

In addition to being the AFSC Northern California branch office, "Friends House" was the interim office for what later became the National Japanese American Student Relocation Council, which helped place interned students at colleges outside the exclusion zone. In 1945, the AFSC welcomed and supported the returning Japanese Americans by helping them find jobs and housing through its Resettlement Office and providing temporary shelter at Friends House.

Few of the women who founded and led the Japanese YWCA returned to San Francisco after the War. Because of policies enacted by the YWCA during the war, the Japanese YWCA was prevented from reestablishing itself as an independent entity. Although for many years a dedicated core of Nisei women continued their activities through a joint program with the Buchanan YWCA the original Japanese YWCA and the knowledge of its ownership of the 1830 Sutter building faded away.

A Dream Fulfilled (bottom right)
The legacy of the Issei women was nearly extinguished in 1996. The San Francisco YWCA decided to put the building on the market and evict its tenants including the Nihonmachi Little Friends bilingual, multicultural preschool which had been the sole Japanese American community tenant in the building since 1985 and the Harrison Out of School program for African American girls, an tenant for over 30 years.

News of the YWCA's action stirred memories of the Issei women's fundraising drives for the building and their efforts to assure that it would always serve the Japanese American community. Entering negotiations with the YWCA, Japanese American researchers discovered that the YWCA's own historical minutes documented their adoption of the trust created by the Issei women. Nonetheless, the YWCA denied the trust's existence and proceeded with its plans to sell the building.

The community rallied to halt the evictions and to reclaim this priceless piece of its history. The Soko Bukai, the Japanese Christian church network whose members originally formed the Japanese YWCA, sued to enforce the trust. In 2002, the lawsuit settled out of court on terms favorable to the Japanese American community. At the Soko Bukai's request Nihomachi Little Friends became the building's new owner and steward, to preserve the 1830 Sutter building and to perpetuate and honor the Issei women's legacy as visionary community builders.

Yona Tsuda Abiko (top right)
More than any other individual, Yona Tsuda Abiko was instrumental in the creation and continued life of the 1830 Sutter building and its legacy. Her family supported education for women - her sister, Umeko Tsuda, founded Tsuda College for Women in Japan. Active in the Japanese Christian community, Yona Abiko helped found the Japanese YWCA as an independent organization, served on its board of directors, raised funds in America and Japan and taught classes on Japanese culture for the Nisei. She spearheaded the creation of the legal trust that circumvented the Alien Land Law and secured the community's interest in the property. Eighty years later, entries from her diary provided crucial evidence of the nature and purpose of the trust and led to the building's return to the Japanese American community.

Yona Abiko worked closely with her husband, community leader, businessman and Nichibel Shimbun newspaper publisher Kyutaro Abiko. Kyutaro Abiko and lawyer Guy Calden has used land trusts to circumvent the Alien Land Law to establish the Yamato Colony and other farming cooperatives. Yona Abiko worked with Calden to create the land trust for the Japanese YMCA. After Kyutaro's death in 1936, Yona became the publishere of the Nichibel Shimbun. Possessed of extraordinary education, experience, connections, intelligence and charm, Yona Abiko was a mentor and role model for Nikkei women and an outstanding advocate and representative for the Japanese American community.

Topics. This historical marker is listed in these topic lists: Asian Americans • Women. A significant historical year for this entry is 1912.

Other nearby markers. At least 8 other markers are within walking distance of this marker. A New Ballgame (within shouting distance of this marker); Uoki Sakai (about 400 feet away, measured in a direct line); Soto Mission of San Francisco (about 600 feet away); House of Gerhard F. Terschuren (about 800 feet away); Mary Ellen Pleasant Memorial Park (approx. 0.2 miles away); Sir Arthur Conan Doyle (approx. 0.3 miles away); Sarcophagus of Thomas Starr King (approx. 0.4 miles away); 1545 Divisadero (approx. half a mile away). Touch for a list and map of all markers in San Francisco.
Credits. This page was last revised on June 16, 2016. It was originally submitted on July 30, 2015, by Barry Swackhamer of Brentwood, California. This page has been viewed 342 times since then and 5 times this year. Photos:   1, 2. submitted on July 30, 2015, by Barry Swackhamer of Brentwood, California. • Andrew Ruppenstein was the editor who published this page.
Share This Page.