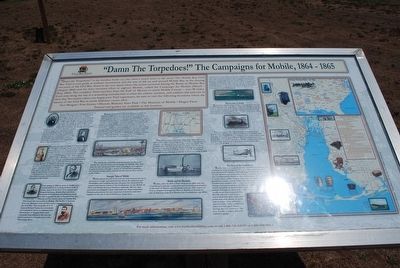 (preface)
"Damn the Torpedoes!" is a familiar battle cry, but there's more to the story! The Mobile Civil War Trail is your guide to military movements and the way of life on and around Mobile Bay in the closing two years of the Civil War. Stand in the very spots where the action occurred during the Battle of Mobile Bay (August 1864) and the later overland effort to capture Mobile, called the Campaign for Mobile (March - May, 1865). The complete Trail stretches from the Gulf of Mexico to north Mobile County - over 90 miles. Each stop along the way is a rewarding introduction to what the sailors, marines, and soldiers did and saw in their day. No matter where you begin your Trail experience, be sure to visit the following locations where the history of the Civil War in south Alabama comes alive: Fort Morgan • Fort Gaines • Historic Blakeley State Park • The Museum of Mobile • Magee Farm
Printed trail guides are available at this location.

(main text)
In July 1864, the war was not going well for U.S. President Abraham Lincoln's administration. Washington was threatened by a southern army; Federal forces 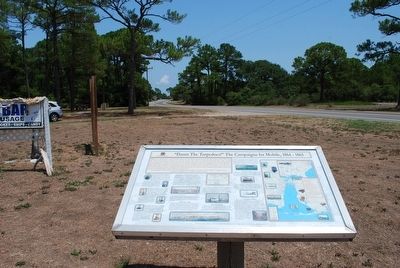 By Brandon Fletcher, July 9, 2011
2. "Damn The Torpedoes!" The Campaigns for Mobile, 1864 - 1865 Marker
seemed to face stalemate in Virginia and Georgia; and a Union invasion of the Red Valley in Louisiana had failed. Casualties were pilling up and Northern voters were disenchanted with the war. Lincoln believed he would lose the election in November to the peace Democrats. Southern armies could no longer win a decisive victory on the battlefield, but C.S. President Jefferson Davis and other Confederate leaders believed (with good reason) that the Confederacy could deny victory to the Union armies and seek negotiated peace with Lincoln's successor.

However, on August 5, 1864, U.S. Admiral David G. Farragut, working closely with army units commanded by U.S. General Gordon Granger, attacked Mobile's lower defensive line. Under fire from Fort Morgan and threatened by torpedoes, Farragut entered Mobile Bay, defeating C.S. Admiral Franklin Buchanan's naval squadron. Farragut and Granger then forced the abandonment or surrender of all of the forts on the lower bay, closing the Port of Mobile to blockade-runners and hoping to pin down Confederates in Mobile that might otherwise reinforce Atlanta. Farragut's was the first in a series of badly needed Union victories which would guarantee the re-election of President Lincoln and the ultimate triumph of the Union. 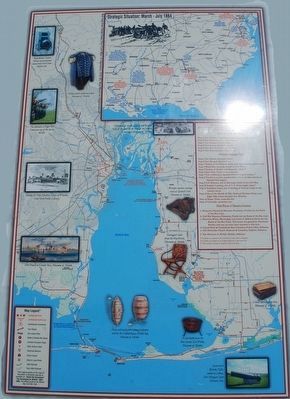 By Brandon Fletcher, July 9, 2011
3. "Damn The Torpedoes!" The Campaigns for Mobile, 1864 - 1865 Marker
Click Map for Details
Fort Gaines and Morgan on lower Mobile Bay and from Pensacola and defeated a Confederate army less than a quarter its size at Spanish Fort and Blakeley on the eastern shore of Mobile Bay. This forced the evacuation of Mobile. The battles at Spanish Fort and Blakeley were the last major engagements of the Civil War. The surrender of C.S. General Richard Taylor, the commander of Confederate forces in Alabama and Mississippi, at Magee Farm and Citronelle soon followed. His was the last Confederate surrender east of the Mississippi River.

Blakeley surrendered on the same day that the Army of Northern Virginia lay down its arms and U.S. General Ulysses Grant commented that Canby's campaign came too late to influence the outcome of the war. Nevertheless, argues historian Chester Hearn, both Mobile campaigns are significant because "...the strategies and tactics applied were immensely superior to those employed in the early stages of the war. Combined operations, trench warfare, coordinated attacks, submarines, torpedoes, minesweeping, land mines, riffled artillery, hand grenades, and naval combat between armored vessels all scientifically evolved throughout the war, and when Union forces invaded the environs of Mobile Bay, nothing had been omitted." Thus the Mobile campaigns were harbinger of what war would become in the twentieth century. 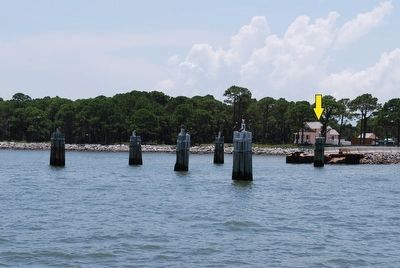 By Brandon Fletcher, July 9, 2011
4. "Damn The Torpedoes!" The Campaigns for Mobile, 1864 - 1865 Marker
The marker is located beside the Snack Bar off the Pier (yellow arrow)
Trail documents the Battle of Mobile Bay and the Overland Campaign for Mobile. The Trail links the sites associated with these campaigns and explores in greater detail, through a series of interpretive exhibits, the historic events which restored Mobile and the Bay country to the Union.

Strategic Value of Mobile
Mobile played her part in the war not only because she lay at the head of a large and sheltered bay fed by the Alabama and Tombigbee river systems, but also because she connected the eastern and western halves of the Confederacy via the Mobile & Ohio and Mobile & Great Northern railroads. She not only processed and shipped cotton imported over the routes from Alabama plantations but also exported munitions and other supplies to the rest of the Confederacy along them.

This railroad system (and the telegraphic links that went with it) also allowed the Confederacy to shift troops rapidly by rail from one theater of war to another when necessary. The Confederates did this on several occasions, but the most dramatic occurred just prior to Braxton Bragg's invasion of Kentucky, when he moved his entire army of 25,000 from Mississippi to Chattanooga via Mobile in about two weeks in 1862.

Mobile and the Blockade
Mobile, after the fall of New Orleans in 1862, was the Confederacy's premier cotton port and the leading destination 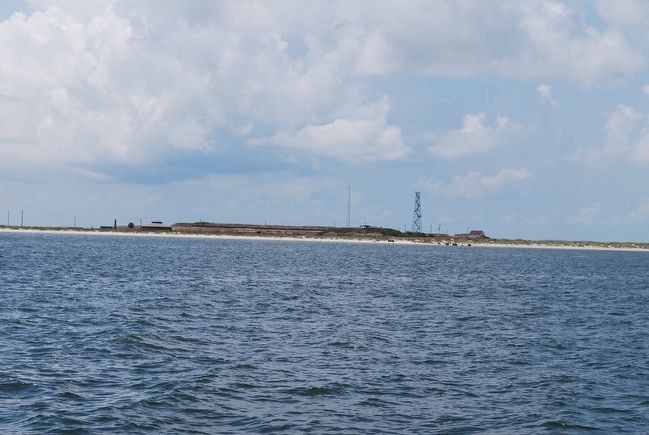 By Brandon Fletcher, July 9, 2011
5. Fort Morgan from Mobile Bay
in the Gulf of Mexico for blockade-runners. The export of cotton, shipped through the Port of Mobile to Europe by way of Havana, helped to finance the Confederate war effort.

Importation of armaments, powder, salt, medicines, blankets, iron, rope, machinery, and other goods, including luxury items, did much to sustain the effort and Confederate morale. From January to August 1864, such fast, shallow draft steamers as the Denbigh and Heroine made 37 runs in and out of Mobile Bay, carrying war materiel in and cotton out, always on dark nights and frequently on stormy ones. During this period, Mobile saw more blockade-running activity than any port in the Confederacy except Wilmington.

War Factories at Mobile
Mobile had a ship-building industry even before the war, but by 1864 it had become a significant center for manufacturing the tools of war: shot and shell, coehorn mortars, wooden gunboats and ironclads, torpedoes (anti-ship mines) and subterra shells (land mines), and submarines. The CSS Baltic, Gaines, and Morgan were built on the river front at Mobile.

The CSS Tennessee was built primarily at Selma but was floated down the Alabama River and finished at Mobile. The City also had a torpedo factory. Finally, more torpedo boats and submarines were tested at Mobile than anywhere else in the South. The CSS Hunley was built in Mobile and tested in the Bay before it was shipped to Charleston where it sank the USS Housatonic in 1864.

The Paris of the Confederacy
Mobile was a cosmopolitan city; in 1860 a quarter of its population were foreigners. It was a city beautifully built and adorned with flowers. Though plagued with shortages of war, Mobile was characterized by a spirit of gaiety and was considered the Paris of the Confederacy. It abounded in oyster bars, coffee houses, saloons, beer and wine shops, gambling houses, dance halls, and theaters. Thousands of Confederate soldiers and sailors, most of whom were young, were garrisoned at Mobile, or were sent to one of its twelve hospitals to recover from wounds or illness, or simply passed through on their way to the front. As often as they could, these boys enjoyed what Mobile offered - and many married Mobile girls. One lady wrote that with plenty of girls, and so many army and navy men in town, "how could it be otherwise but gay?" Even during the last winter of the war, hardly a night passed without a party.

(captions)
(map on right)
Tour Stops and Other Places of Historical Interest:
More information about thesee stops and other places of interests listed below involving interpetive markers of "Damn the Torpedoes!" The Campaigns for Mobile, 1864 - 1865, the official guide to the Mobile Bay Civil War Trail