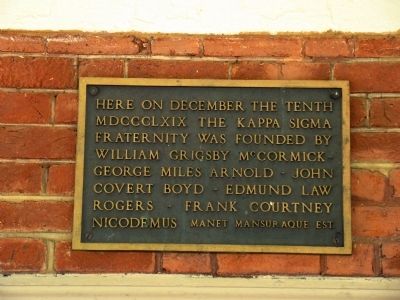 Location. 38° 2.05′ N, 78° 30.233′ W. Marker is in Charlottesville, Virginia, in Albemarle County. Marker can be reached from the East Lawn. It is at the University of Virginia. Touch for map. Marker is at or near this postal address: No 46 East Lawn, Charlottesville VA 22904, United States of America. Touch for directions.

More about this marker. Manet Mansuraque Est. As it is, it shall remain. The fraternity was founded in 1869. 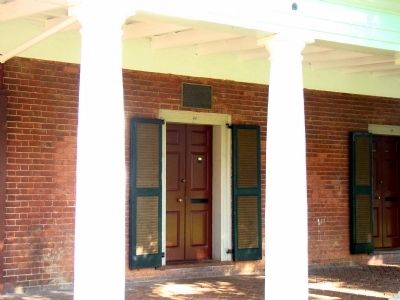 Click or scan to see
this page online
Kappa Sigma Fraternity in America. “In that same year, the original five searched for others who would complement their diverse personalities. They initiated two more in that first year, Samuel Isham North and John Edward Semmes. The following year, two of the original five left the University, as did Semmes, leaving its future in the hands of Brothers Arnold, Boyd, Rogers and North. They initiated three more into the order that year. On March 18, 1871 the entire active membership, consisting of seven, met to initiate William Cornelius Bowen. They did not realize at the time that the work of this Saturday night would ensure the future of the fraternity. Bowen was the only member to return to the University the following year, and it was placed in his hands to prevent the work of the original five from fading away.” (Submitted on July 4, 2008.) 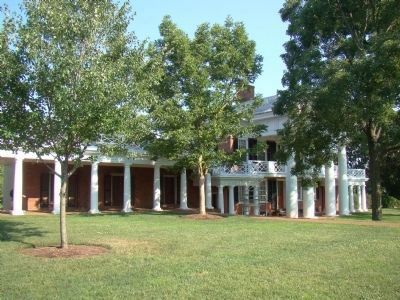