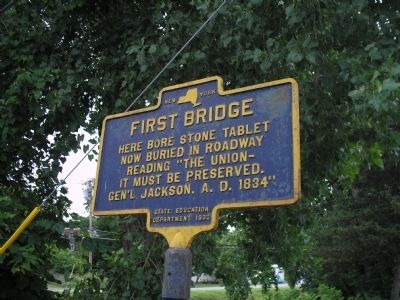 By Bill Coughlin, July 13, 2008
1. First Bridge Marker
Inscription.
First Bridge. .
Here bore stone tablet now buried in roadway reading “The Union - It must be preserved. Gen’l Jackson. A. D. 1834”.. . This historical marker was erected in 1932 by New York State Education Department. It is in Schuylerville in Saratoga County New York

Here bore stone tablet
now buried in roadway
reading “The Union -
It must be preserved.
Gen’l Jackson. A. D. 1834”.

Location. 43° 5.988′ N, 73° 34.807′ W. Marker is in Schuylerville, New York, in Saratoga County. Marker is on Ferry Street (New York State Route 29), on the right when traveling west. Marker is located near the entrance to Fort Hardy Park. Touch for map. Marker is in this post office area: Schuylerville NY 12871, United States of America. Touch for directions. 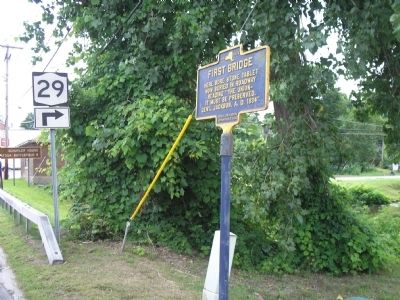 Click or scan to see
this page online
The Union, It must be preserved. This is an interesting marker as the quote belongs to Andrew Jackson, A Tennessean and a slave owner but one who, at least in 1834 felt that the Union must be preserved. The New York Times, in 1862 wrote this about the misuse of Jackson's quote:

"Gen. JACKSON is credited with a terse and happy sentiment that has become familiar as househould words in the United States. It is this: "The Federal Union -- it must be preserved." It was given as a toast, a great many years ago, at a patriotic entertainment in Washington.

This compact, simple, and yet all-embracing sentence, fit to be the sublime war-cry of a great nation, is almost daily mutilated and diluted by public speakers and the Press. Tammany Hall has been chief in this corruption of the Old Hero's language, by hanging out a rude canvas with a daub of Gen. JACKSON, to say: "The Federal Union -- it must and shall be preserved." And so distinguished a democrat as ROBERT J. WALKER is reported to have said, in a public speech in Washington, the other day, that, "in the woods of Gen. JACKSON, the Union must and shall be preserved." This is worse, even, than Tammany, in its barbarous rendering of a noble, rotund, mouth and heart-filling sentiment.

We call the country to order, and require a greater respect to the memory of Old Hickory. He was not afraid 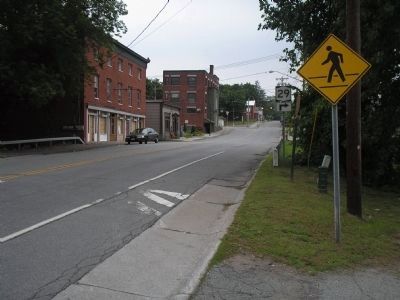