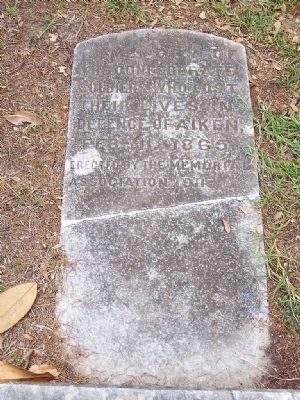 In Memory of
the Confederate
soldiers who lost
their lives in
defense of Aiken,
Feb. 11, 1865
Erected by the Memorial
Association 1911

Erected 1911 by The Memorial Association.

Topics. This historical marker is listed in this topic list: War, US Civil. A significant historical month for this entry is February 1805. 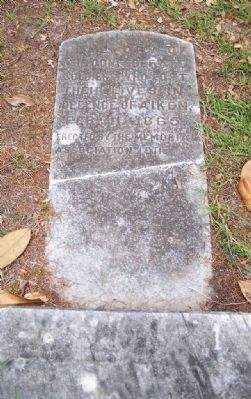 Photographed By Mike Stroud
2. Defense of Aiken Marker broken off and settling flat , in the ground

Additional commentary.
1. Defense of Aiken Marker
The marble marker, which lies flat on the ground beside its intended marble base, measures thirty-six inches tall. The Ladies Memorial Association of Aiken and the women of the U.D.C. erected this marker in a ceremony held at the site at 6 p.m. on June 5, 1911. It was originally placed in an upright position 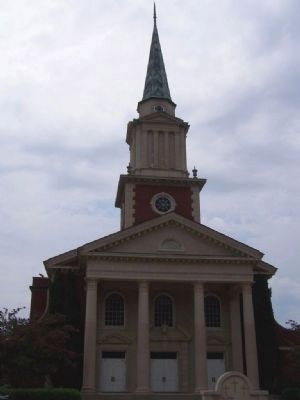 Photographed By Mike Stroud
3. Defense of Aiken Marker located at Aiken First Baptist Church grounds , SE corner
to mark the gave of an unknown Confederate soldier, who was buried where he fell during the battle of Aiken. Because the grave sites of the other Confederate dead were unknown, this site was chosen to represent all the Confederates who died in the defense of Aiken...Rev. T.D. Johnson opened with a prayer, and Mayor Giles presided. Giles introduced Rev. J.B. Traywick, a Confederate veteran, who made a touching and patriotic tribute to the dead soldiers and at the conclusion of his remarks, presented a Cross of honor to two sons of Confederate veterans. (Source: A Guide to Confederate Monuments in South Carolina: "Passing the Silent Cup" by Robert S. Seigler, 1997, pgs. 44-45.)
— Submitted February 28, 2009, by Brian Scott of Anderson, South Carolina.
2. The Battle of Aiken
Aiken was the scene of a street battle on February 11, 1865. Union Major General Judson Kilpatrick's cavalry was surprised on both flanks by Confederate Major General Joe Wheeler's cavalry. Kilpatrick had been warned repeatedly that Wheeler's men were in the area possibly trying to set up a trip, but the man known as "Kit-Calvary" for his hard driving of men and horses could not have cared less. Dozens of Kilpatrick's men were cut down by Confederate pistols. Those who could still breathe turned tail and galloped off, with the Confederates in hot pursuit.

Kilpatrick led the scramble out of town, with several Confederates riding amongst the Federals in an attempt to pull the general off his horse and take him prisoner. If there was one thing Kilpatrick always did well, it was ride his horse away from Confederates. He escaped. More than ninety Federals were taken prisoner. Kilpatrick's hat was also captured. (Source: Touring the Carolina's Civil War Sites by Clint Johnson, pg 365.)
— Submitted March 14, 2009, by Brian Scott of Anderson, South Carolina.
Credits. This page was last revised on June 16, 2016. It was originally submitted on August 8, 2008, by Mike Stroud of Bluffton, South Carolina. This page has been viewed 2,195 times since then and 213 times this year. Last updated on September 12, 2015, by Steve Masler of Memphis, Tennessee. Photos:   1, 2, 3. submitted on August 8, 2008, by Mike Stroud of Bluffton, South Carolina. • Bernard Fisher was the editor who published this page.
Share this page.