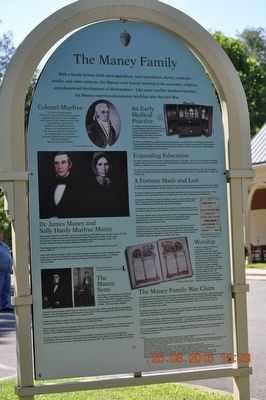 With a family fortune built upon agriculture, land speculation, slavery, medicine, textiles, and other ventures, the Maneys were heavily involved in the economic, religious, and educational development of Murfreesboro. Like many wealthy Southern families, the Maneys experienced hardship after the Civil War.

The Maneys had two daughters and six sons. Four of these children died over a year's time in 1838-39.

After Sally Maney's death in 1857, Dr. Maney passed management of the Oaklands estate to his son Lewis and divided the land among his three remaining children. Dr. Maney, Sally Maney and several of their children are buried in the "Old City Cemetery" on Vine Street. 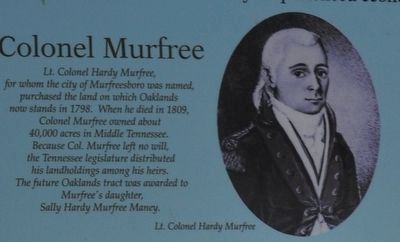 Photographed By Sandra Hughes, August 25, 2015
2. Colonel Murfree
Lt. Colonel Hardy Murfree, from whom the city of Murfreesboro was named, purchased the land on which Oaklands now stands in 1798. When he died in 1809, Colonel Murfree owned about 40,000 acres in Middle Tennessee. Because Col. Murfree left no will, the Tennessee legislature distributed his landholdings among his heirs. The future Oaklands tract was awarded to Murfree’s daughter, Sally Hardy Murfree Maney.

Lewis and Adeline, several of their children and many Maney family slaves are buried in Evergreen Cemetery, the lands of which was once part of the Oaklands estate.

Lewis’s brother was David Dickinson Maney, known as D.D. Maney )1828-1899). In 1849, he married Mary L. Bell, a daughter of Tennessee politician John Bell, who ran against Republican Abraham Lincoln in the 1860 Presidential election.

On May 2, 1861, D. D. enlisted in the “Rutherford Rifles,” Company I, 1st Tennessee Regiment, Confederate States of America, making him the only Maney son to fight in the Civil War. D.D. Maney survived the war and became a Tennessee State senator in 1877. He is buried in Evergreen Cemetery.

An Early Medical Practice
Dr. Maney was one of the first and most prominent medical doctors in the country. He attended the University of Pennsylvania medical school in Philadelphia, the nation’s foremost medical institution at 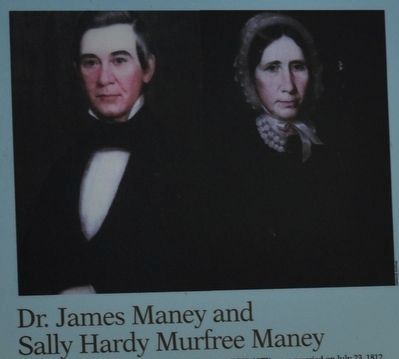 Dr. Maney established a medical practice in Murfreesboro by 1825 and by 1830 helped charter the Tennessee State Medical Society, later known as the Tennessee Medical Association. The association was formed to regulate and improve the practice of medicine in Tennessee at a time when medical training and licensing were not required.

Expanding Education
Dr. Maney possessed an early and continuing interest in education. He served as a trustee for Bradley Academy, the first school for white boys in Murfreesboro. Bradley became a school for African-American children in 1884 and is now a museum.

Dr. Maney was a trustee for Soule College, the first female-only school in the county. He also helped establish the female-only Eaton College by selling the land for the school. Soule and Eaton colleges no longer exist.

A Fortune Made and Lost
In addition to his medical practice, Dr. Maney was a slave holding planter who owned four tracts of land in and around Murfreesboro, as well as farms in West Tennessee and Mississippi before the Civil War.

Dr. Maney and his sons prospered through land speculation, the slave trade, and agriculture. They operated a cotton spinning factory, a dry goods store and other businesses in Murfreesboro.

During the antebellum period, Dr. Maney owned as much as 5,000 acres 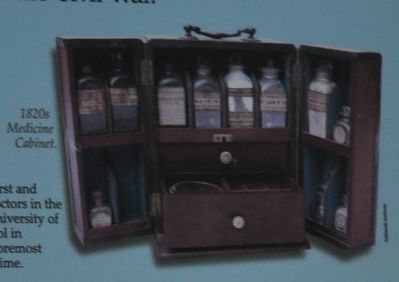 Photographed By Sandra Hughes, August 25, 2015
4. 1820s Medicine Cabinet.
of land. Census records indicate that the Maneys had between 30 and 100 slaves at Oaklands and additional slaves in Mississippi.

At Oaklands, the Maneys’ slaves grew crops such cotton, tobacco, corn and other products and raised assorted livestock for consumption and sale.

When the railroad came to Murfreesboro in 1851, it brought unprecedented economic opportunity. The Maney family took advantage of new opportunities in land speculation, mercantile enterprise, textile manufacturing and the slave trade.

The Maney’s economic fortunes declined after the Civil War due to the abolition of slavery and the decline of slavery-dependent agriculture, property damages and losses sustained during the war, legal troubles and a national economic depression in the 1870s. After the war, the Maneys subsisted largely through land purchases and sales.

The Maney's economic fortunes declined after the Civil War due to the abolition of slavery and the decline of slavery-dependent agriculture, property damages and losses sustained during the war, legal troubles and a national economic depression in the 1870s. After the war, the Maneys subsisted largely through land purchases and sales.

Worship
A devout family, the Maneys worshiped at the First Presbyterian Church, which stood on present-day Vine Street until it was torn down by the Union 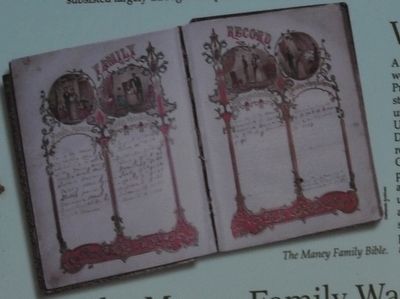 Photographed By Sandra Hughes, August 25, 2015
5. The Maney Family Bible
Army during the Civil War. Dr. Maney was described by relative Harriet Holt Keeble Clayton as a “man of intense piety and of high honor.” He was an elder in the church from 1825 until his death in 1872. In accordance with the church’s strict moral doctrines, Dr. Maney probably forbade dancing and alcohol consumption at Oaklands.

The Maney Family War Claim
In October 1872, Dr. Maney filed a war claim with the Southern Claims Commission, a federal body that compensated Southerners loyal to the Union during the Civil War. Dr. Maney’s $27,012 claim sought to recoup losses, specifically wood, timber and fence rails taken by the Union Army during its occupation of Murfreesboro. To receive compensation, the family had to convince the court of Dr. Maney’s loyalty to the Union.

In 1907, Newton Maney refiled the claim and gathered witnesses to testify on Dr. Maney’s behalf. One witness characterized Dr. Maney as a “Union man…generally considered as loyal during the War.” Although the family did not support secession, they sided with the Confederacy when the war broke out. 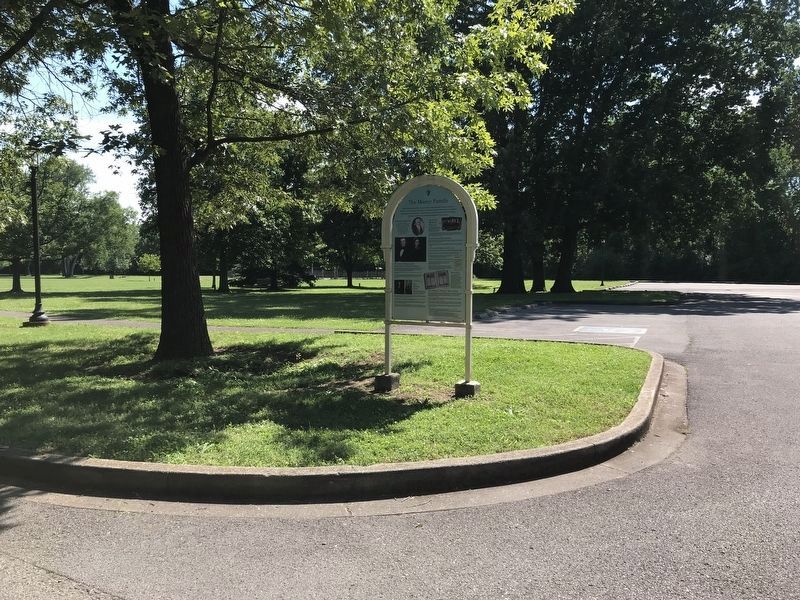 Location. 35° 51.289′ N, 86° 23.135′ W. Marker is in Murfreesboro, Tennessee, in Rutherford County. Marker can be reached from North Maney Avenue north of Roberts Street, on the left when traveling north. Touch for map. Marker is at or near this postal address: 900 N Maney Ave, Murfreesboro TN 37130, United States of America. Touch for directions. 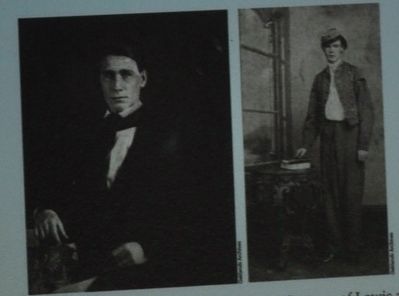