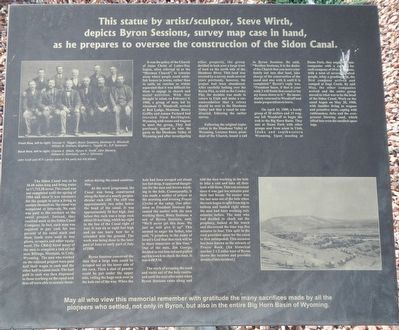 This statue by artist/sculptor, Steve Wirth, depicts Byron Sessions, survey map case in hand, as he prepares to oversee the construction of the Sidon Canal.

It was the policy of the Church of Jesus Christ of Latter-Day Saints, often referred to as the "Mormon Church", to colonize areas where people could establish homes in towns, rather than to settle on ranches so widely separated that it was difficult for them to engage in church and social activities. With that thought in mind, of February 9, 1900, a group of men, led by Abraham O. Woodruff, arrived at Red Lodge, Montana. Henry Griffin and Amasa Packard had traveled from Burlington, Wyoming with teams and wagons to meet the group. They previously agreed to take the party to the Shoshone Valley of Wyoming and after investigating other property, the group decided to look over a large tract of land on the north side of the Shoshone River. This land was covered by a survey made several years previously, however, the project had been abandoned. After carefully looking over the Byron Flat, as well as the Cowley Flat, the decision was made to return to Utah and make a recommendation 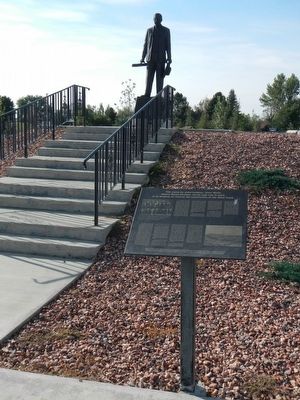 Click or scan to see
this page online
that a colony should be sent to the Shoshone Valley and that a canal be constructed, following the earlier survey.
Following the original exploration to the Shoshone Valley of Wyoming, Lorenzo Snow, president of the Church, issued a call to Bryon Sessions. He said, "Brother Sessions, it is the desire of the Church that you move your family out into the land, take charge of the construction of the canal and stay with it until it is completed." Byron's reply was, "President Snow, if that is your wish, I will finish that canal and lay my bones down in it." He immediately returned to Woodruff and made preparations to leave.
On April 24, 1900, a hardy group of 30 settlers and 15 wagons left Woodruff to begin the trek to the Big Horn Basin. They met at Hams Fork with other groups sent from areas in Utah, Idaho and southwestern Wyoming. Upon meeting at Hams Fork, they organized into companies with a captain for each company of 10 to 12 wagons, with a total of serval hundred people. After a grueling trek, the first company arrived and camped at Sage Creek, By mid-May, the other companies arrived and the entire group moved to what was to be the head of the Sidon Canal. Work on the canal began on May 28, 1900, with families living in wagons and primitive tents, coping with rattlesnakes, ticks and ever-present blowing sand, which sifted into even the smallest openings.
The 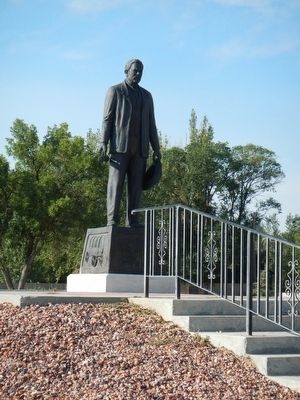 Photographed By Barry Swackhamer, September 14, 2015
3. Byron Sessions Statue
Sidon Canal was to be 30.48 milers long and bring water to 17,715.28 acres. The canal was not completed until the spring of 1904 and since it was necessary for people to earn a living to sustain themselves, the canal was completed at intervals. No cash was paid to the workers on the canal project. Instead, they received stock in the Sidon Canal Company. In fact, each man was required to pay cash for two percent of his canal stock and these funds were used to by plows, scrapers and other equipment. The CB&Q hired many of the men to complete a link of rail near Billings, Montana to Cody, Wyoming. The men who worked on the railroad project were paid half their wages in cash and the other half in canal stock. The half paid in cash was then dispensed to those working on the canal and thus all were able to sustain themselves during the canal construction.
As the work progressed, the Canal was being constructed along the foot of a nearly perpendicular rock cliff. The cliff was approximately two miles below the head of the canal. It was approximately 50 feet high. Just below this rock was a large rock about 20 feet long, which lay right in the line of the Canal right of way. This was six or eight feet high and no one knew how far it extended into the ground. The work was being done in the later part of June or early part of July of 1900.
Byron Sessions conceived the idea that a large hole could be scraped out on the lower side of the rock. Then a shot of powder could be put under the upper side, rolling the huge rock over in the hole out of the way. When the hole had been scraped out about ten feet deep, it appeared dangerous for men and horses working in the hole. Consequently, it was made a matter of prayer at the morning and eventing Prayer Circle at the camp. One afternoon as President Sessions discussed the matter with the men working there, Biney Sessions, a son of Byron Sessions, said, "We'll never get this done. We just as well give it up." This seemed to anger his father, who said, "I prophesy in the name of Israel's God that that rock will be in there tomorrow at this time." One of the men, Jim George, decided to test him out and pulled out his watch to check the time. It was 4:00 P.M.
The work of scraping the sand and rocks out of the hole continued until the next afternoon when Byron Sessions came along and told the men working in the hole to take a rest and take all their tools with them. This was unusual since it was just ten minutes past their last break. No sooner was the last man out of the hole when the rock began to split from top to bottom and landed right where the men had been working only minutes before. The man who had decided to check out the prophecy, looked at his watch and discovered the time was five minutes to four. This split in the rock provided space for the canal to flow unimpeded. This occasion has been known as the miracle of Prayer Rock. (An historical marker 2 1/2 miles west of Byron shows the location and provides details of this incident.)

May all who view this memorial remember with gratitude the many sacrifices made by all the pioneers who settled, not only in Byron, but also in the entire Big Horn Basin of Wyoming.

Topics. This historical marker is listed in this topic list: Waterways & Vessels. A significant historical date for this entry is May 28, 1900.