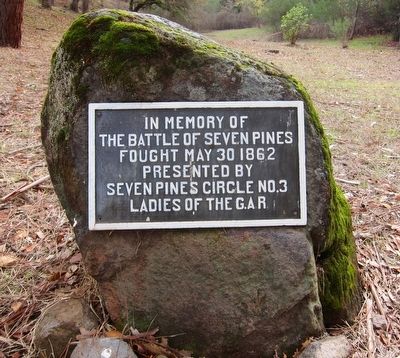 In Memory of The Battle of Seven Pines Fought May 30 1862 Presented By
Seven Pines Circle No. 3 Ladies of the G.A.R.


Erected by Seven Pines Circle No. 3 Ladies of the G.A.R.

Location. 38° 23.344′ N, 122° 21.992′ W. Marker is in Yountville, California, in Napa County. The marker sits by itself in the back of the Memorial Grove on the Yountville Veterans Home campus. Once you find the Grove (it is signed, and there is plenty of parking), walk uphill straight through the Grove, perhaps 200-300 feet, and the marker is just on the other side of a service road. To find the Grove - enter the grounds from Highway 29 or Solano Road, taking California Drive. Make a left upon entering the grounds, and follow the road - it will make a right turn, going past Holderman Hospital. Past the hospital is the parking lot for Memorial Grove. Touch for map. Marker is in this post office area: Yountville CA 94599, United States of America. Touch for directions. 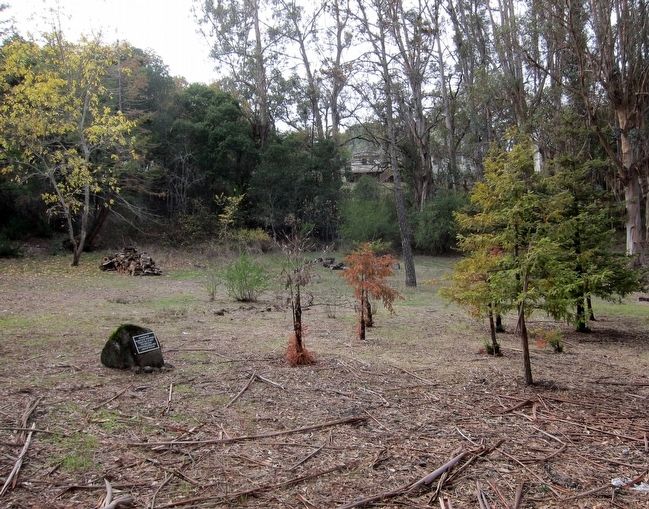 Regarding Battle of Seven Pines Memorial. The National Park Service (CWSAC) summary for the battle: "On May 31, Gen. Joseph E. Johnston attempted to overwhelm two Federal corps that appeared isolated south of the Chickahominy River. The Confederate assaults, though not well coordinated, succeeded in driving back the IV Corps and inflicting heavy casualties. Reinforcements arrived, and both sides fed more and more troops into the action. Supported by the III Corps and Sedgwick’s division of Sumner’s II Corps (that crossed the rain-swollen river on Grapevine Bridge), the Federal position was finally stabilized. Gen. Johnston was seriously wounded during the action, and command of the Confederate army devolved temporarily to Maj. Gen. G.W. Smith. On June 1, the Confederates renewed their assaults against the Federals who had brought up more reinforcements but made little headway. Both sides claimed victory. Confederate brigadier Robert H. Hatton was killed."

It is unclear why the date on the marker is a day earlier than the battle date presented here.