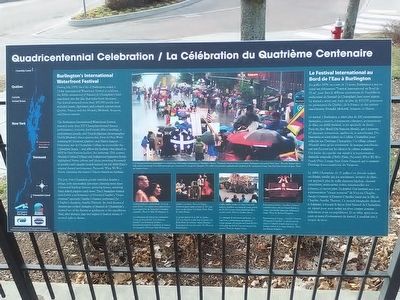 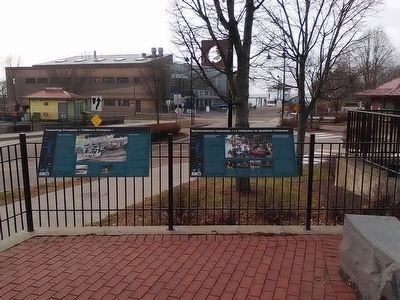 By Alexander Schwarzmueller, December 6, 2015
2. Westward on College Street
Towards Lake Champlain. It is the right of the two markers.
parade unfolded despite a deluge, with rain-soaked spectators cheering more than a thousand hip-hop dancers, prancing horses, stunning black stilted puppets - and more. The Champlain festival ended with a performance of Victoria Chaplin's "Cirque Nouveau" spectacle, Aurelia's Oratorio, performed by haplin's daughter, Aurelia Thierree. Its vivid theatrical dreamscape evoked thoughts of Samuel de Champlain's reputed use of his dreams as guideposts to his expeditions. And, after thirteen days and nights of fesitval events, it seemed right to dream.

[marker is also in French]