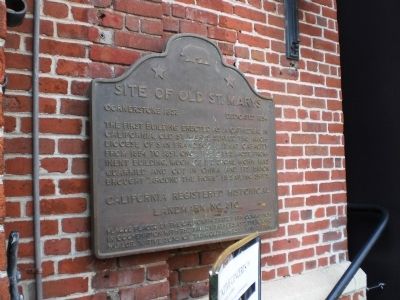 The first building erected as a cathedral in California, Old Saint Mary’s served the archdiocese of San Francisco in that capacity from 1854 to 1891. Once the City’s most prominent building, much of its stone work was quarried and cut in China and its brick brought “around the Horn” in sailing ships.

Plaque placed by California State Park Commission in cooperation with the Paulist Fathers and the Grand Parlor of the Native Sons of the Golden West, May 7, 1966

Erected 1966 by California State Park Commission and the Paulist Fathers and the Grand Parlor of the Native Sons of the Golden West. (Marker Number 810.)

Topics and series. This historical marker is listed in these topic lists: Churches & Religion • Notable Buildings. In addition, it is included in the California Historical Landmarks, and the Native Sons/Daughters of the Golden West series lists. A significant historical month for this entry is May 1864. 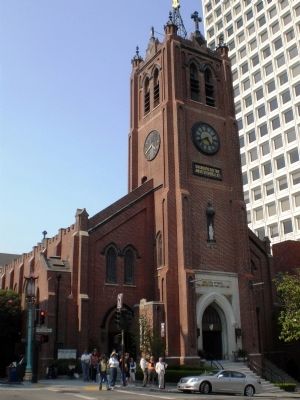 Click or scan to see
this page online
Marker is at or near this postal address: 660 California Street, San Francisco, San Francisco CA 94108, United States of America. Touch for directions.

Regarding Site of Old St. Mary’s. The following church history was transcribed from the display case in the church library, date and author unknown:

“The (old) Cathedral of St. Mary of the Immaculate Conception was erected in 1854 as the seat of the Archdiocese of San Francisco for the entire Pacific Coast. Pioneer banker and landowner John Sullivan, whose wife is buried in the crypt, had donated the site in 1853 to Archbishop Alemany in order that he could erect the first cathedral building in all California. Architects William Craine and Thomas England modeled the cathedral after a gothic church in Vich, in Archbishop Alemany’s native Spain. The cornerstone was laid on July 17, 1853, but work progressed slowly due to the loss of skilled workers to the gold fields and the lack of available building materials. Despite these setbacks 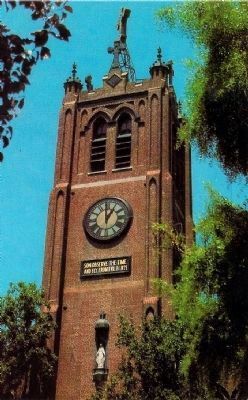 Granite for the foundation and trim elements were quarried and cut in China, while the brick for the exterior walls was shipped from New England around the Horn and used as ballast on the ship. Only the sandstone used to trim the clock and the main entrance was quarried and cut locally. The interior was lavish, featuring vaulted ceilings with a series of plaster groin arches and a marble altar imported from Rome. As the decades passed, the changing neighborhood and the “Barbary Coast” required moving the cathredral to a safer and more respectable part of the city. With the dedication of the “new” Saint Mary’s Cathredral in 1891, the former cathedral became known as Old Saint Mary’s Cathedral.

The earthquake of 1906 caused little damage to Old Saint Mary’s. Two finials fell from the buttresses, as did the cross and pediment on the front of the church, crushing the granite steps of the main entrance; otherwise the building escaped unscathed. But the fire sweeping through the city after the earthquake gutted the church by midnight. However, the walls, with the exception of the rear gable that collapsed after the fire, remained intact, and neither the foundation nor the walls cracked or disintegrated. Popular opinion sided with then Paulist Pastor Father Wyman who called for rebuilding. He received support from the noted architect Willis Polk, who claimed that “to tear down the standing walls 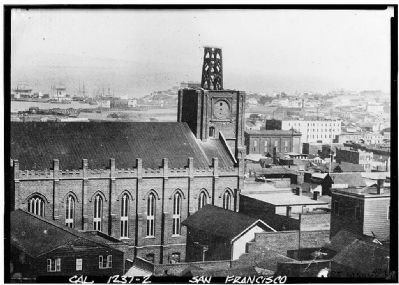 By George Robinson Fardon, 1854
4. Old St. Mary's - 1854
One of the 1850's commercial innovations in the developing field of photography was the publication of folios of photographs depicting a single city or region. G.R. Fardon arrived in San Francisco in 1849, and began photgraphing the rapidly developing city. Herre and Bauer published his photographs in the first compilation of photographs of any American city with their book, "San Francisco Album. Photographs of the Most Beautiful Views and Public Buildings of San Francisco.", in which this photo appeared.
of Old Saint Mary’s was to tear down history itself.” Ultimately, the architects examining the site decided to reconstruct the church using the remaining structure. Archbishop Riordan rededicated the cathedral on Sunday, June 20, 1909.

The original building ended where the front pew is. In January 1929, architect Edward A. Eames added fifty feet to the building along Grant Avenue, constructing east and west transepts to create a cruciform floor plan and increasing the seating to 2000. (The current altar, Blessed Sacrament Chapel and sacristy wing is part of this construction.)

A fire in the attic above the main altar did considerable damage to the roof and interior of the building on January 11, 1966. Architect John Minton designed the repairs as well as some further interior remodeling. The church was reopened for service on Easter Sunday 1967. On May 7, 1966, the California State Landmarks Commission gave the cathedral official landmark status, and on March 6, 1968, the City and County of San Francisco designated the church its number two landmark.“ 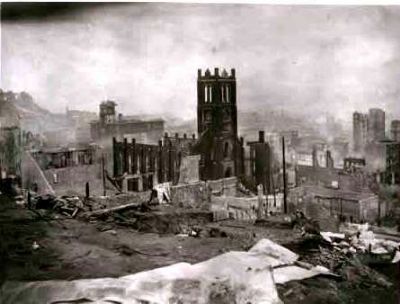