Site of the First Schoolhouse

— A town at that time known as Turk's Head — 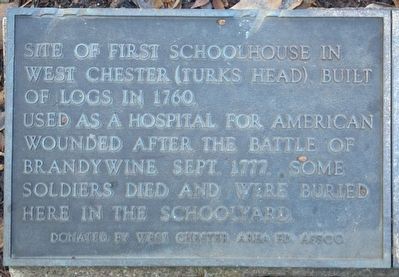 Site of First Schoolhouse in West Chester (Turk's Head), built of logs, 1760. Used as a hospital for American wounded after the Battle of Brandywine, Sept, 1777. Some soldiers died and were buried here in the schoolyard.

Topics. This historical marker is listed in these topic lists: Colonial Era • Education • Settlements & Settlers • War, US Revolutionary. A significant historical year for this entry is 1760.

Location. 39° 57.629′ N, 75° 36.323′ W. Marker is in West Chester, Pennsylvania, in Chester County. Marker can be reached from the intersection of West Gay Street and South High Street, on the right when traveling west. This marker and another are on the ground in a flower bed planter that is within a short wrought iron fence, a few feet from a more modern marker with the same text. Touch for map. Marker is in this post office area: West Chester PA 19380, United States of America. Touch for directions.

Other nearby markers. At least 8 other markers are within walking distance of this marker. Site of First School House in West Chester (a few steps from this marker); Bank of Chester County

Photographed By Keith S Smith, January 6, 2016
2. Notable Teachers from West Chester
Of the educators listed here four of them, Sarah W. Starkweather, B. Reed Henderson, Joseph R. Fugett, and G. Arthur Stetson have schools that were named in their honor.

More about this marker. The marker directly next to this one lists the names of the towns noted educators through the years. 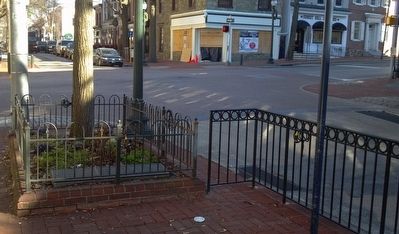 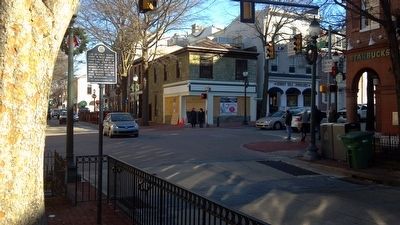