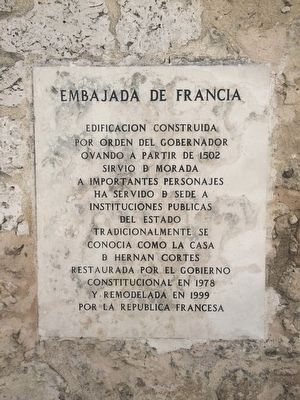 Photographed By J. Makali Bruton, January 17, 2016
1. The French Embassy Marker
Inscription.
English translation: This building was constructed by order of Governor Ovando starting in 1502. It served as a residence for many important persons. It has been the headquarters for many public institutions. Traditionally it is known as the house of Hernán Cortés. It was restored by the Constitutional Government in 1978 and remodeled in 1999 by the government of France.. . This historical marker is in Ciudad Colonial in Santo Domingo Distrito Nacional Dominican Republic