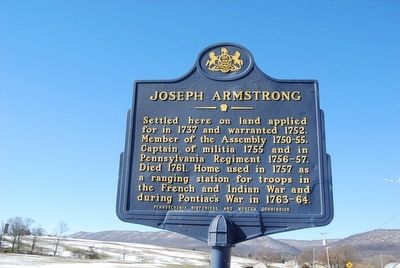 By Mike Wintermantel, February 18, 2016
1. Joseph Armstrong Marker
Inscription.
Joseph Armstrong. . Settled here on land applied for in 1737 and warranted 1752. Member of the Assembly 1750-55. Captain of militia 1755 and in Pennsylvania Regiment 1756-57. Died 1761. Home used in 1757 as a ranging station for troops in the French and Indian War and during Pontiac's War in 1763-64. . This historical marker was erected by Pennsylvania Historical and Museum Commission. It is in St. Thomas Township in Franklin County Pennsylvania

Topics and series. This historical marker is listed in these topic lists: Government & Politics • Settlements & Settlers • War, French and Indian. In addition, it is included in the Pennsylvania Historical and Museum Commission series list.

Location. 39° 57.78′ N, 77° 47.157′ W. Marker is in St. Thomas Township, Pennsylvania, in Franklin County. Marker is at the intersection of Apple Way and Coble road, on the right when traveling west on Apple Way. Touch for map. Marker is at or near this postal address: 2897 Coble Rd, Chambersburg PA 17202, United States of America. Touch for directions. 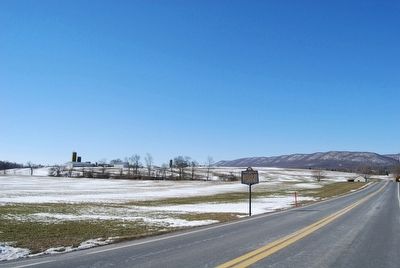