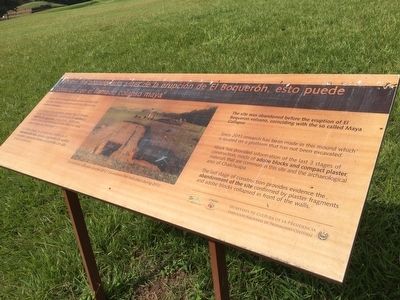 Photographed By J. Makali Bruton, January 9, 2016
1. Abandonment of the San Andrés Archaeological Site Marker
Inscription.
English: , The site was abandoned before the eruption of El Boquerón volcano, coinciding with the so called Maya Collapse , Since 2011 research has been made in this mound which is located on a platform that has not been excavated. , Work has provided information of the last 3 stages of construction, made of adobe blocks and compact plaster, materials that are common in this site and the archaeological area of Chalchuapa. , The last stage of construction provides evidence the abandonment of the site confirmed by plaster fragments and adobe blocks collapsed in front of the walls., Caption: Excavation that took place during 2012. . This historical marker was erected by Secretaría de Cultura de la Presidencia de El Salvador. It is Near San Andrés in San Juan Opico La Libertad El Salvador