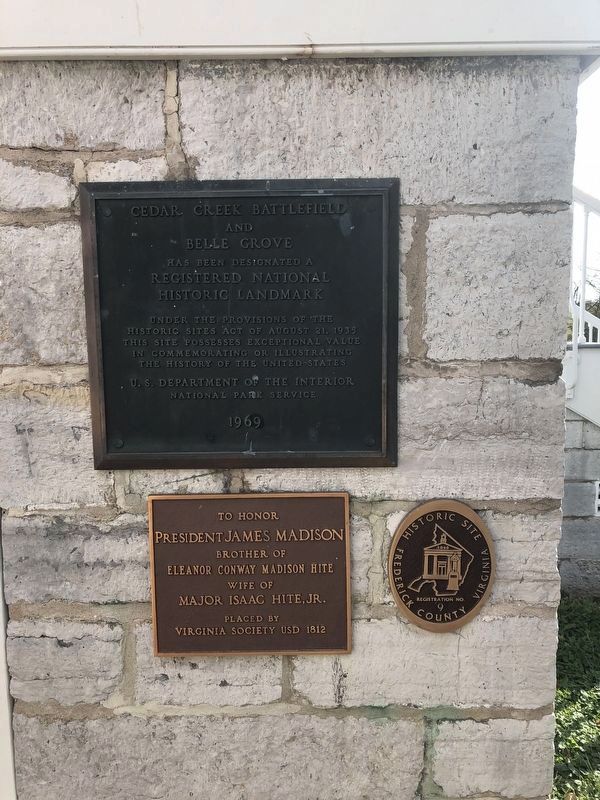 Cedar Creek Battlefield and Belle Grove has been designated a Registered National Historic Landmark under the jurisdiction of the Historic Sites Act of August 21, 1935. This site possesses exceptional value in commemorating or illustrating the history of the United States.

Topics and series. This historical marker is listed in these topic lists: Agriculture • Landmarks • Settlements & Settlers • War, US Civil. In addition, it is included in the Former U.S. Presidents: #04 James Madison, and the National Historic Landmarks series lists. A significant day of the year for for this entry is May 31. 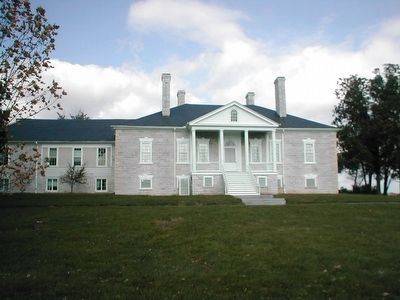 Photographed By Don Morfe, October 24, 2005
2. Belle Grove Plantation Mansion
Marker is mounted near an entrance door on the side of the porch, to the left of the front stairs in this photo.

Click or scan to see
this page online
to Belle Grove Plantation mansion. It is a unit of the National Park Service. Touch for map. Marker is at or near this postal address: 336 Belle Grove Rd, Middletown VA 22645, United States of America. Touch for directions.

Additional commentary.
1. Cedar Creek Battlefield and Belle Grove
“Belle Grove was one of the first mansions built in the Shenandoah Valley; it was completed in 1797 for a sister of James Madison and her husband.

In 1864 it was made into Union General Philip Sheridan's headquarters, and served as a focal point for the Battle of Cedar Creek. Cedar Creek Battlefield, which extends for miles in every direction from Belle Grove, was the site of the last decisive conflict in the Shenandoah Valley. The Confederate defeat here forced their final retreat from the area, after which General Sheridan devastated it from end to end.” — National Register Form.
— Submitted May 19, 2018, by Allen C. Browne of Silver Spring, Maryland.
Credits. This page was last revised on June 19, 2022. It was originally submitted on February 23, 2016, by Don Morfe of Baltimore, Maryland. This page has been viewed 432 times since then and 29 times this year. Photos:   1. submitted on October 24, 2020, by Devry Becker Jones of Washington, District of Columbia.   2. submitted on February 23, 2016, by Don Morfe of Baltimore, Maryland. • Kevin W. was the editor who published this page.
Share this page.