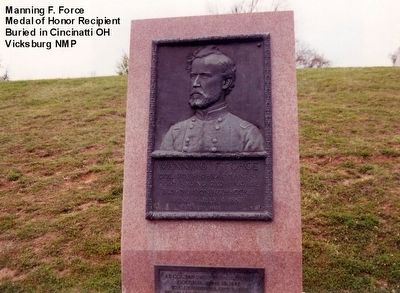 Erected by Given by his Son.

Topics and series. This monument and memorial is listed in this topic list: War, US Civil. In addition, it is included in the Medal of Honor Recipients series list.

Location. 32° 21.562′ N, 90° 50.456′ W. Marker is in Vicksburg National Military Park, Mississippi, in Warren County. Memorial is on Union Ave (within the Vicksburg NMP). The monument is located at the parking lot of the Illinois State Monument. Touch for map. Marker is in this post office area: Vicksburg MS 39183, United States of America. Touch for directions. 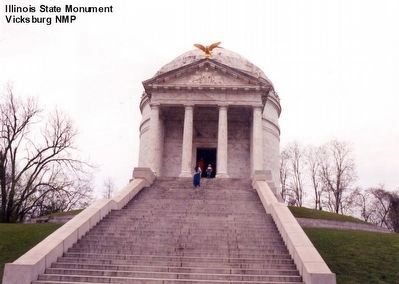 Click or scan to see
this page online
line); U.S. Battery G, (about 600 feet away); Mortimer D. Leggett (about 800 feet away); The Mine Explosion (approx. 0.2 miles away). Touch for a list and map of all markers in Vicksburg National Military Park. 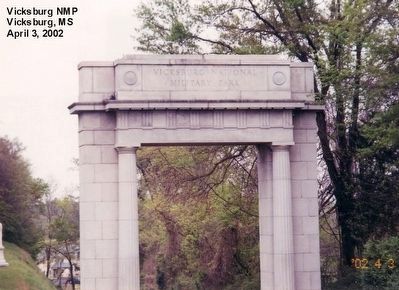 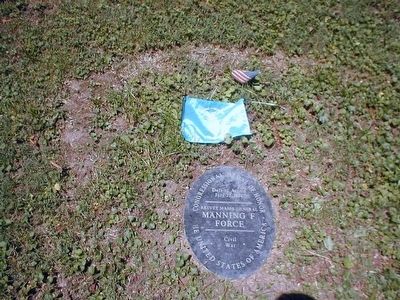 Photographed By Don Morfe, September 13, 2000
4. Manning F. Force grave marker
He is buried in Spring Grove Cemetery, Cincinnati OH, Section 46, Lot 99. His Medal of Honor information and citation is: FORCE, MANNING F. • Rank and organization: Brigadier General, U.S. Volunteers • Place and date: At Atlanta, Ga., 22 July 1864 • Entered service at: Cincinnati, Ohio • Date of issue: 31 March 1892 Citation: Charged upon the enemy's works, and after their capture defended his position against assaults of the enemy until he was severely wounded.
Credits. This page was last revised on March 31, 2020. It was originally submitted on March 5, 2016, by Don Morfe of Baltimore, Maryland. This page has been viewed 350 times since then and 26 times this year. Photos:   1, 2, 3, 4. submitted on March 5, 2016, by Don Morfe of Baltimore, Maryland. • Bill Pfingsten was the editor who published this page.
Share this page.