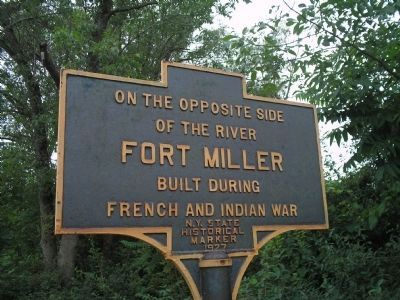 By Bill Coughlin, July 13, 2008
1. Fort Miller Marker
Fort Miller and Fort Edward sit aside the historic Champlain canal which connects the Hudson River with Lake Champlain.
Inscription.
Fort Miller. .
On the opposite side of the river Fort Miller built during French and Indian War.. . This historical marker was erected in 1927 by New York State. It is in Fort Edward in Washington County New York

On the opposite side
of the river
Fort Miller
built during
French and Indian War.

Topics. This historical marker is listed in these topic lists: Colonial Era • Forts or Castles • Military • War, French and Indian.

Other nearby markers. At least 8 other markers are within 3 miles of this marker, measured as the crow flies. Gen. Henry Knox Trail (within shouting distance of this marker); Duer House (approx. 0.2 miles away); Judge William Duer (approx. half a mile away); a different marker also named Fort Miller (approx. ¾ mile away); Gen. Washington (approx. 1.2 miles away); Five Porch Farm (approx. 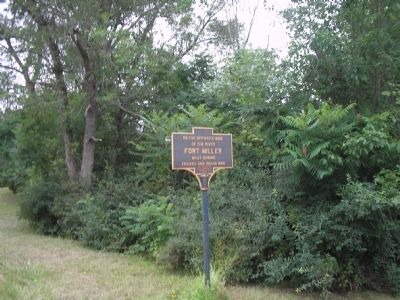