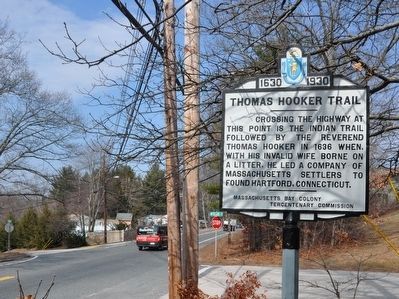 Photographed By Robert Aberg, March 8, 2016
1. Thomas Hooker Trail Marker
View along Route 122 in northerly direction.
Inscription.
Thomas Hooker Trail. Crossing the highway at this point is the Indian trail followed by the Reverend Thomas Hooker in 1636 when, with his invalid wife borne on a litter, he led a company of Massachusetts settlers to found Hartford, Connecticut. . This historical marker was erected in 1930 by Massachusetts Bay Colony-Tercentenary Commission. It is in Grafton in Worcester County Massachusetts

Crossing the highway at this point is the Indian trail followed by the Reverend Thomas Hooker in 1636 when, with his invalid wife borne on a litter, he led a company of Massachusetts settlers to found Hartford, Connecticut.

Topics and series. This historical marker is listed in these topic lists: Colonial Era • Native Americans. In addition, it is included in the Massachusetts Bay Colony—Tercentenary Commission Markers series list. A significant historical year for this entry is 1636.

Other nearby markers. At least 8 other markers are within 6 miles of this marker, measured as the crow flies. Hassanamesit (approx. 0.7 miles away); Indian Reservation (approx. 1.2 miles away); The Old Connecticut Path (approx. 5.1 miles away); Corporal John M. Dawson 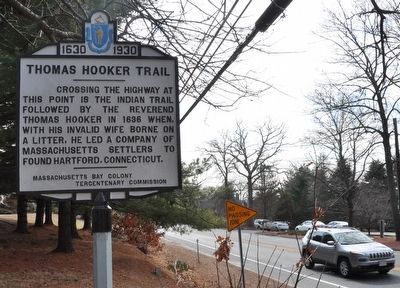 More about this marker. The "Thomas Hooker Trail" marker was received from a concerned citizen by members of the Grafton Historical Commission in October, 2014. The marker was taken to Worcester Technical High School and restored and repainted using Massachusetts DOT official paint color and specifications (ref: http://www.thegraftonnews.com/worcester-tech-students-restore-historical-markers-to-their-former-glory/ ). The marker was subsequently remounted on March 8, 2016 by the Grafton Highway Dept. at the same location.

2. Grafton Historical Society. The Grafton Historical Society, incorporated in 1964, is a private organization that collects, preserves and interprets objects related to the history of Grafton, Massachusetts. The office and museum are located in the Lower Level of the Grafton Town House (the former Town Hall). (Submitted on September 10, 2011, by Russell Chaffee Bixby of Bernardston, Massachusetts.) 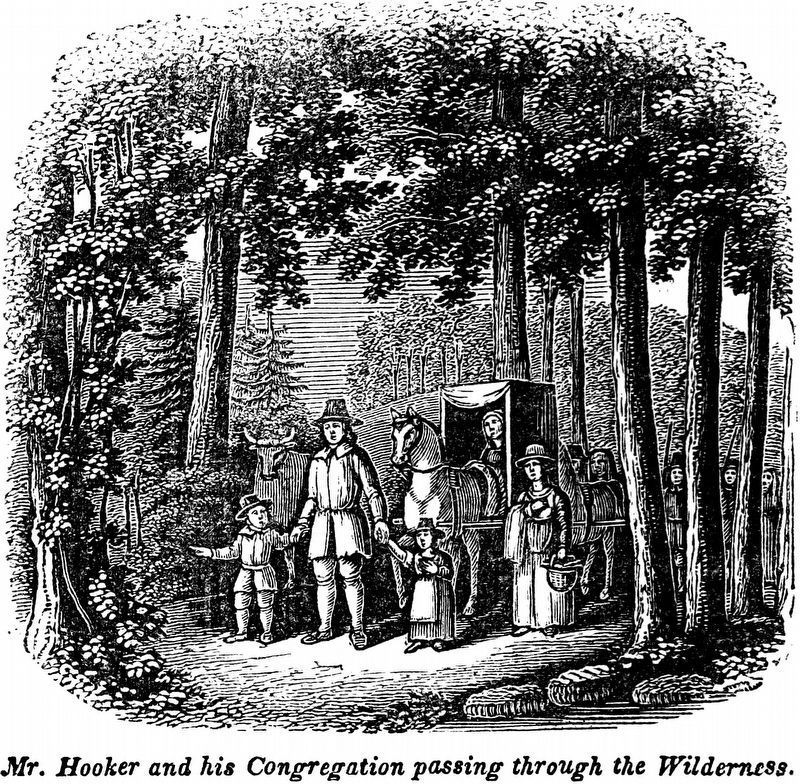 Internet Archive
3. The First Settlers of Connecticut
“Mr. Hooker and his Congregation passing through the Wilderness” from Historical Poetical and Pictorial American Scenes, by John Warner Barber and Elizabeth G. Barber 1851.
Credits. This page was last revised on July 19, 2019. It was originally submitted on June 8, 2011, by Russell Chaffee Bixby of Bernardston, Massachusetts. This page has been viewed 1,268 times since then and 51 times this year. Last updated on March 14, 2016, by Robert Aberg of Grafton, Massachusetts. Photos:   1, 2. submitted on March 14, 2016, by Robert Aberg of Grafton, Massachusetts.   3. submitted on June 29, 2019, by Allen C. Browne of Silver Spring, Maryland. • Bill Pfingsten was the editor who published this page.
Share this page.