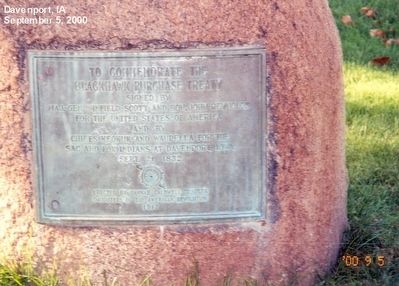 To commemorate the Blackhawk Purchase Treaty signed by Maj. Gen. Winfield Scott and Hon. John Reynolds for the United States of America and by Chiefs Keokuk and Waupella for the Sac and Fox Indians at Davenport Iowa Sept. 21, 1832.

Erected 1917 by Hannah Caldwell Chapter Daughters of the American Revolution.

Topics and series. This memorial is listed in these topic lists: Native Americans • Wars, US Indian. In addition, it is included in the Daughters of the American Revolution (DAR) series list. A significant historical date for this entry is September 21, 1832.

Location. 41° 31.141′ N, 90° 34.593′ W. Marker is in Davenport, Iowa, in Scott County. Memorial is on Biederbeck Drive. The historical marker is located in LeClaire Park. Touch for map. Marker is in this post office area: Davenport IA 52801, United States of America. Touch for directions.