The Woman's Club of Antioch 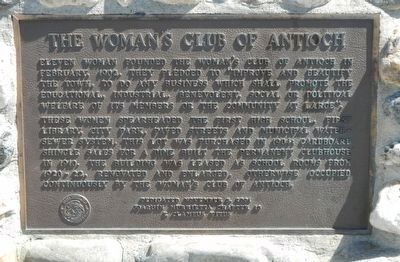 Eleven women founded the Woman's Club of Antioch in February, 1902. They pledged to "improve and beautify the town, to do any business which shall promote the educational, industrial, benevolent, social or political welfare of its members or the community at large."
These women spearheaded the first high school, first library, city park, paved streets and municipal water-sewer system. This lot was purchased in 1904; cardboard shingle sales for a dime built the permanent clubhouse in 1910. The building was leased as school rooms from 1920-22. Renovated and enlarged, otherwise occupied continuously by the Woman's Club of Antioch.

Topics and series. This historical marker is listed in these topic lists: Fraternal or Sororal Organizations • Women. In addition, it is included in the E Clampus Vitus series list. 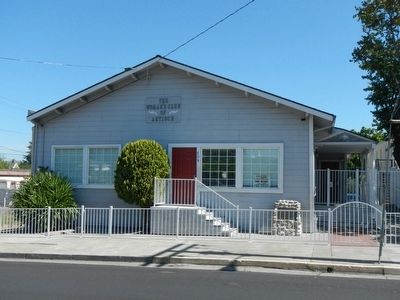 By Barry Swackhamer, March 31, 2016
2. The Woman's Club of Antioch and Marker
is on G Street near West 5th Street, on the left when traveling south. Touch for map. Marker is at or near this postal address: 509 G Street, Antioch CA 94509, United States of America. Touch for directions.