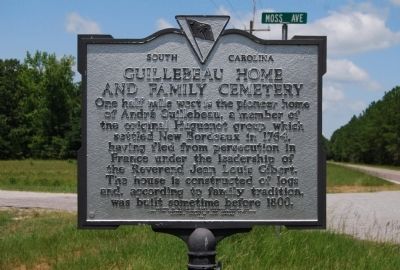 Photographed By Brian Scott, July 19, 2008
1. Guillebeau Home and Family Cemetery Marker - Front
Inscription.
Guillebeau Home and Family Cemetery. . , [Front]: , One half mile west is the pioneer home of Andre Guillebeau, a member of the original Huguenot group which settled New Bordeaux in 1764, having fled from the persecution in France under the leadership of the Reverend Jean Louis Gibert. The house is constructed of logs and, according to family tradition, was built sometime before 1800. , [Reverse]: , Among eighteen members of the Guillebeau family buried in the cemetery one half mile west are Andre Guillebeau, French Huguenot and soldier of the American Revolution, his wife, Mary Jane Roquemore, their son, Pierre Guillebeau, who was for many years a ruling elder of Willington Presbyterian Church, and his wife, Mary Jane Bellot. . This historical marker was erected in 1972 by Huguenot Society of South Carolina, McCormick County Historical Society, Long Cane Chapter, Daughters of the American Revolution. It is in Bordeaux in McCormick County South Carolina

[Front]:
One half mile west is the pioneer home of Andre Guillebeau, a member of the original Huguenot group which settled New Bordeaux in 1764, having fled from the persecution in France under the leadership of the Reverend Jean Louis Gibert. The house is constructed of logs and, according to family tradition, was built sometime before 1800. 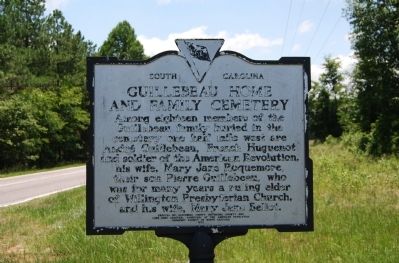 Click or scan to see
this page online
• Settlements & Settlers • War, US Revolutionary. In addition, it is included in the Daughters of the American Revolution (DAR), and the South Carolina, McCormick County Historical Society series lists. A significant historical year for this entry is 1764. 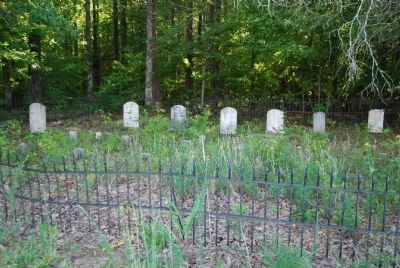 Additional commentary.
1. Guillebeau House
The Guillebeau House is a good example of Southern pioneer construction. Built on the double pen house plan developed extensively in the South, the house has one exterior chimney and two front entrances. Shed-roof porch across front, originally open, has been enclosed at either end to provide additional rooms. The original floor plan is still intact and consists of three rooms in front of three rooms. The second floor also has three rooms which were completed shortly after the Revolutionary 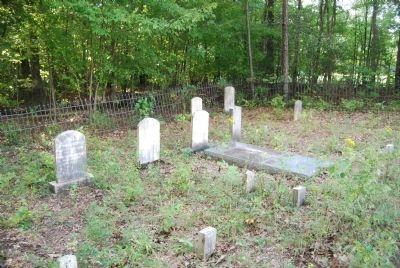 Photographed By Brian Scott, September 20, 2008
4. Guillebeau Cemetery
War. At one time a dining room wing was attached at rear but is not believed to have been original.

Several of the large logs which provided original foundation supports are still intact. Walls are constructed of hand-hewn logs with mortise-and-tenon joints. Filling between logs.

Original exterior end chimney is laid in Flemish bond in first two stages. In third stage, brickwork is done in all stretcher pattern with alternating header-stretcher design in comers.

The family cemetery is included in the acreage nominated. It is maintained by the Guillebeau descendants.

Significance
With the revival of the Reformed Church in France by such leaders as Antoine Court, the French government enacted the vindictive Edict of 1724 which was in force until the 1787 Edict of Toleration. During this period of relentless Protestant persecution, a small group of French Huguenots led by the Reverend Jean Louis Gibert and the Reverend Pierre Boutiton petitioned George III for permission to establish a settlement in one of England's American colonies. Their petition was granted in 1763 when the Earl of Hillsborough wrote to Governor Boone of South Carolina that the 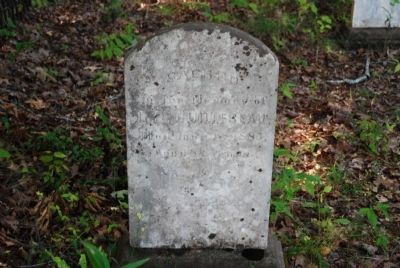 Photographed By Brian Scott, September 20, 2008
5. L. B. Guillebeau Tombstone
Died Jan. 14, 1885
Aged 82 Years
king thought it advisable for the French to be established in South Carolina where their knowledge of the culture of vines and silks would be particularly useful. Hillsborough further instructed the governor to provide a "proper Township for them either upon the river Savannah or "some other Convenient river." After a long sea voyage from Plymouth, England and several months delay in Charleston and at Fort Lyttleton near Port Royal, the French settlers arrived at New Bordeaux in August 1764. Although there were several Huguenot settlements in the lowcountry, New Bordeaux was the only such settlement in the South Carolina upcountry. Andre Guillebeau (b.1739-d.1814) built this house shortly after his arrival at New Bordeaux. The house was subsequently owned by Andre's son Peter (b.1769-d.1854) and then by Peter's son Peter (b.1812-d.1891). After the death of Peter in 1891, the property went to Peter's brother, John James Guillebeau, who sold it shortly thereafter. According to Peter's will, there was a 400-acre tract surrounding the house.

Military Significance
During the American Revolution, Andre Guillebeau served in the American militia under Captain Joseph Bouchillon (also a Huguenot settler at New Bordeaux) from August 1779 - May 1782. Andre wounded in action.

Architectural Significance
The Guillebeau House is a fine physical document 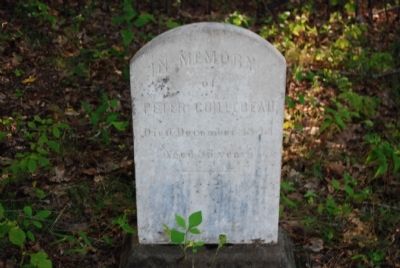 Photographed By Brian Scott, September 20, 2008
6. Peter Guillebeau Tombstone
Died December 1844
Aged 85 Years
on 18th Century pioneer construction in the South. It remains largely unaltered. Descendants of Andre Guillebeau continue to hold family reunions in New Bordeaux every other year and are most interested in promoting the purchase and restoration of the house. Since it is the only extant Huguenot building in New Bordeaux, its preservation is extremely important to the area and the state. (Source: National Register nomination form.)
— Submitted November 23, 2009, by Brian Scott of Anderson, South Carolina. 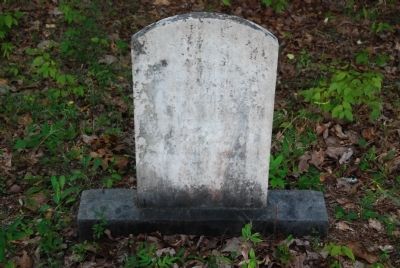 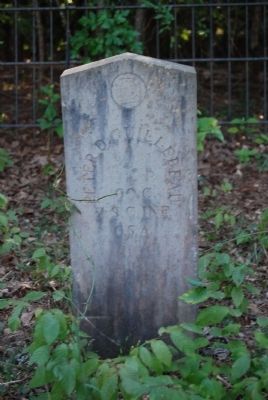 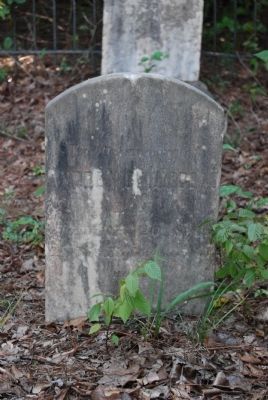 Photographed By Brian Scott, September 20, 2008
10. Andre Guillebeau Tombstone
Died in 1814 Aged 75 Yrs.
Born in France, was one of
the first settlers of this county.
Was a soldier in the
revolutionary war, and
received a wound in the hip. 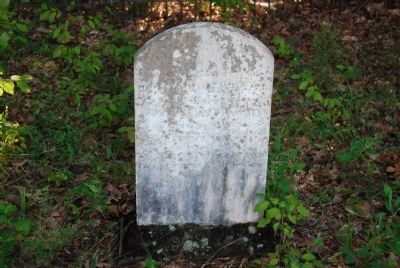 Photographed By Brian Scott, September 20, 2008
11. Mary Guillebeau Tombstone
Died in 1820
aged 75 years
She emigrated from
France to this country
with her husband
(Andre Guillebeau). 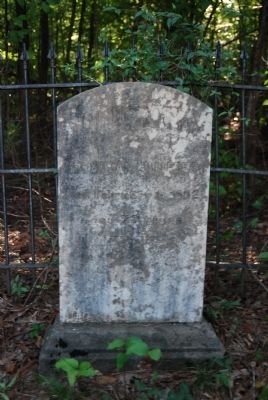 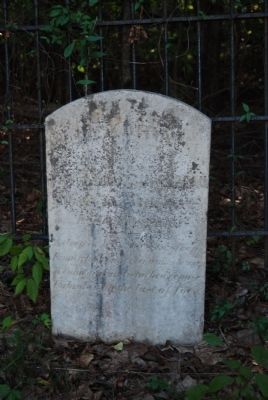 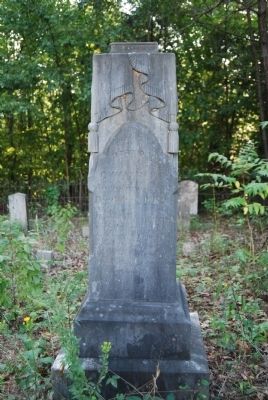 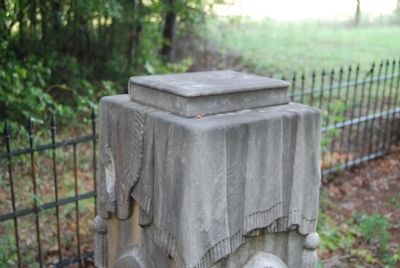