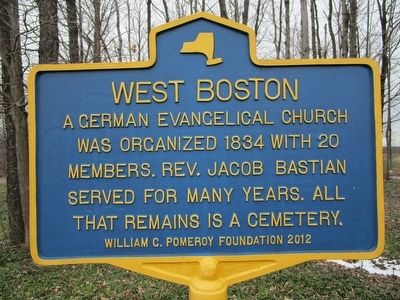 Photographed By Anton Schwarzmueller, April 10, 2016
1. West Boston Marker
Inscription.
West Boston
A German evangelical church was organized 1834 with 20 members. Rev. Jacob Bastian served for many years. All that remains ia a cemetery. . . This historical marker was erected in 2012 by William G. Pomeroy Foundation. It is in Boston in Erie County New York

West Boston
A German evangelical church
was organized 1834 with 20
members. Rev. Jacob Bastian
served for many years. All
that remains ia a cemetery.

Topics and series. This historical marker is listed in these topic lists: Cemeteries & Burial Sites • Churches & Religion. In addition, it is included in the William G. Pomeroy Foundation series list. A significant historical year for this entry is 1834.

Location. 42° 39.421′ N, 78° 47.959′ W. Marker is in Boston, New York, in Erie County. Marker is on Feddick Road (County Route 469) 0.6 miles south of Keller Road, on the right when traveling south. Marker can only be seen southbound, and at a considerable distance at that. Marker is on an unpaved dead end access that deviates from the paved road as the paved road descends in elevation. Touch for map. Marker is at or near this postal address: 8300 Feddick Road, Hamburg NY 14075, United States of America. Touch for directions.

Other nearby markers. At least 8 other markers are within 4 miles of this marker, measured as the crow flies. Site of the John Love Murder (approx. 1.6 miles away); Typhoid Traced to Well 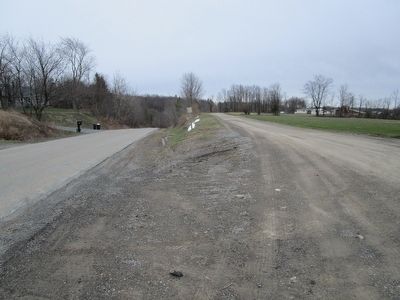 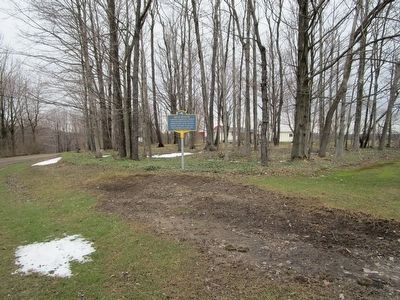 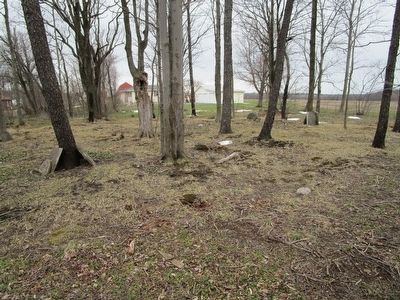