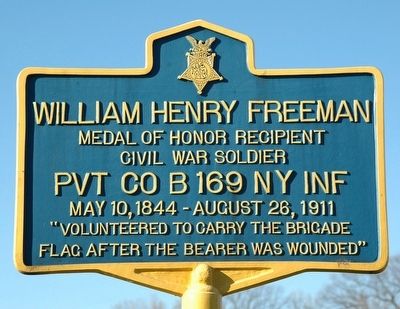 Topics. This historical marker is listed in these topic lists: Cemeteries & Burial Sites • Forts and Castles • Patriots & Patriotism • War, US Civil. A significant historical date for this entry is May 10, 1844.

Location. 42° 45.349′ N, 73° 40.218′ W. Marker is in Troy, New York, in Rensselaer County. Marker can be reached from Oakwood Road. The marker can be seen from the roadway within Oakwood Cemetery, near the Gardner Earl Memorial Chapel & Crematorium. Touch for map. Marker is in this post office area: Troy NY 12182, United States of America. Touch for directions. 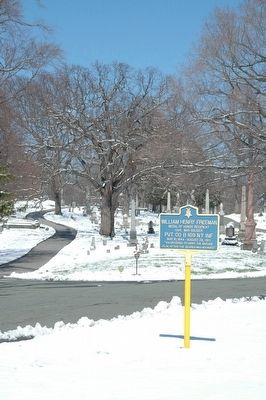 More about this marker. The Historical marker was installed and dedicated in the Fall of 2012 during the annual Oakwood Cemetery fundraising Gala, in commemoration of the anniversary years of the Civil War. Oakwood Cemetery obtained the marker and installed it. The marker is near the entrance to the cemetery, but the W. H. Freeman gravesite is located in a different location, in section H; GPS (lat/lon): 42.75901, -73.66712.

Regarding William Henry Freeman. Freeman was employed as a brass molder in Troy, New York before enlisting in Company B of the 169th NY Volunteer Infantry (known as “The Second Troy Regiment”) in early 1863. Among other campaigns, that regiment participated in the 1864 operations against Fort Fisher, NC, which was an immense sand fortification that guarded the inlet to Wilmington, North Carolina, the last major open Confederate seaport on the Atlantic coast.

The Second Battle of Fort Fisher (January 13-15, 1865) was a joint assault by Union Army and naval forces against the Confederate fort, which was sometimes referred to as the "Gibraltar of the South" and the last major coastal stronghold of the Confederacy, thus giving Fort Fisher a tremendous strategic value during the war. The Medal of Honor was awarded to 54 Union servicemen, including Freeman, for their actions during 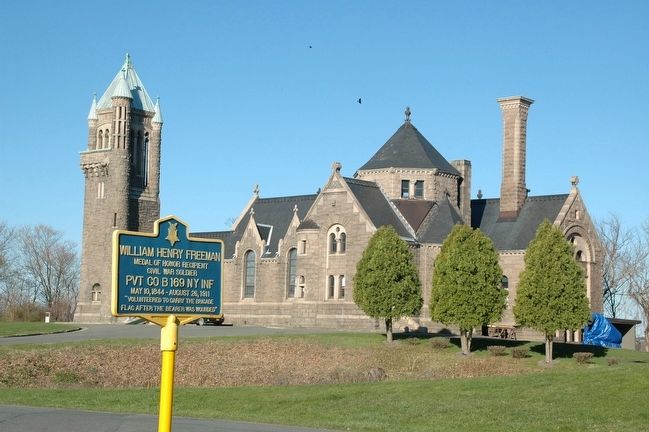 At the final attack on that fortress on January 15, 1865, Alonzo Alden, the Colonel of the 169th NY was acting as commander of the brigade that was attacking the land wall of the fort. After the bearer of Alden’s personal flag was shot down, Private Freeman threw down his weapon and carried the brigadier’s flag, making himself a prominent target while he voluntarily carried the colors throughout the remainder of the engagement.

Colonel Alden recalled the incident in his personal memoir, which was published in 1896:

"Within a few moments thereafter, about five o'clock P.M., [on January 15th], in compliance with the suggestion or order of General Ames, a portion of the Third Brigade, partially in self-defence, charged through the sally port into the interior of the short wing of the fort, receiving a scattering fire from the garrison, resulting in several casualties. A little circumstance occurring at this juncture was indelibly stamped upon my memory because of the bravery and gallantry involved.

"I had in my hand a substitute for the brigade headquarters flag; the color bearer had either been shot or for some reason was absent. I called for someone to take the colors. My private orderly who was with me called out, 'I will carry your colors, Colonel.' I had a just pride in my orderly, who was only 16 years old when he enlisted 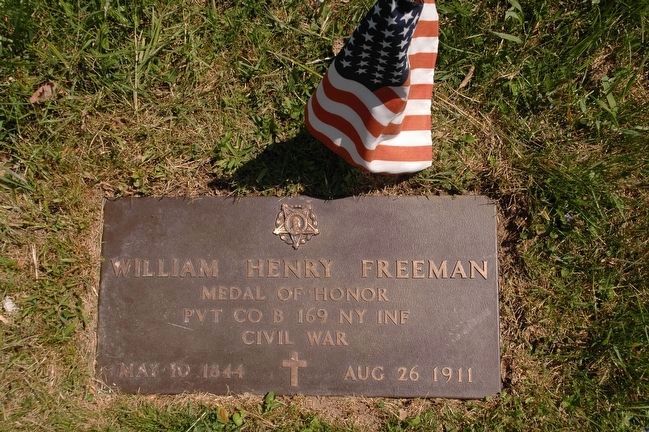 Returning to Troy after his discharge, Freeman resumed his career as a brass molder, and was later employed as a janitor in the Post Office. On May 27, 1905, more than 40 years after the fact, Private William Freeman was awarded a Medal of Honor for his service at Fort Fisher. The official citation reads “Volunteered to carry the brigade flag after the bearer was wounded.”

Awarded for actions during the Civil War

The President of the United States of America, in the name of Congress, takes pleasure in presenting the Medal of Honor to Private William Henry Freeman, United States Army, for extraordinary heroism on 15 January 1865, while serving with Company B, 169th New York Infantry, in action at Fort Fisher, North Carolina. Private Freeman volunteered to carry the brigade flag after the bearer was wounded.


Recently, in 2011, James B. Freeman, a great-grandson of William H. Freeman, and his sister, Shirley Hoffman, very graciously donated William's 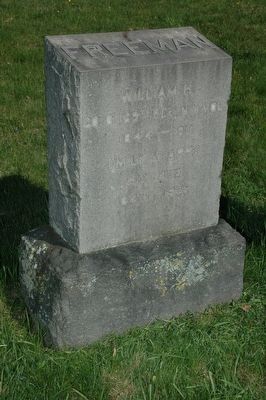 WILLIAM H.
CO. B, 169TH REG. N.Y. VOL.
1844---1911
EMILY W. APPS
HIS WIFE
1847-1926
Medal of Honor, along with a wartime tintype photograph and other personal memorabilia to the Fort Fisher State Historic Site Museum at Cape Fear, N.C. where they are now a part of the museum's permanent collection. 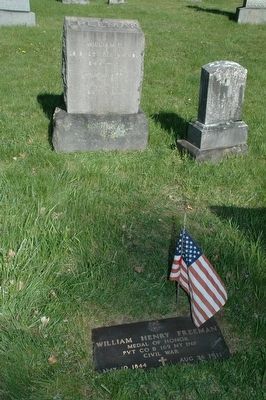 Photographed By Howard C. Ohlhous, May 9, 2016
6. William Henry Freeman Gravesite
The Freeman family gravestone is in the background, while the government grave marker is in the foreground. 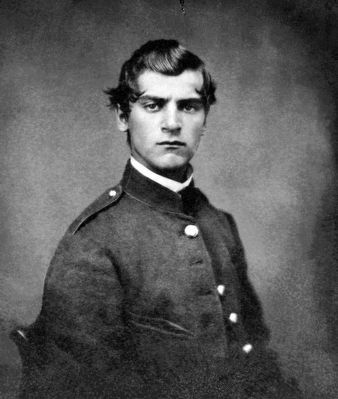