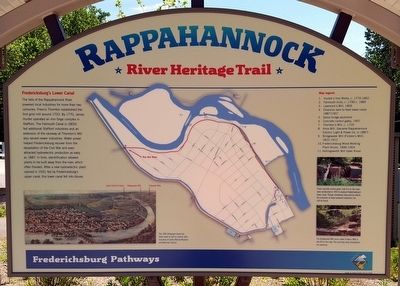 (side 1)
Fredericksburg’s Lower Canal
The falls of the Rappahannock River powered local industries for more than two centuries. Francis Thornton established the first grist mill around 1720. By 1770, James Hunter operated an iron forge complex in Stafford. The Falmouth Canal (c.1800) fed additional Stafford industries and an extension of the raceway at Thornton's Mill also served newer industries. Water power helped Fredericksburg recover from the devastation of the Civil War and even attracted hydroelectric production as early as 1887. In time, electrification allowed plants to be built away from the river, which often flooded. After a new hydroelectric plant opened in 1910, fed by Fredericksburg's upper canal, this lower canal fell into disuse. 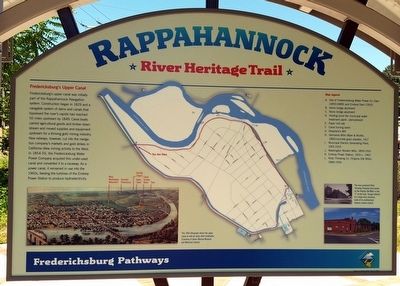 These concrete control gates (site #6 on the map) were constructed in 1907 to improve Fredericksburg’s lower canal. Though sometimes obscured by nature, the remnants of water-powered industries can still be found.

The Bridgewater Mill (once called Ficklen’s Mill) is site #9 on the map. The surviving stone foundations are extensive.

(side 2)
Fredericksburg's Upper Canal
Fredericksburg’s upper canal was initially part of the Rappahannock Navigation system. Construction began in 1829 and a navigable system of dams and canals that bypassed the river's rapids had reached 50 miles upstream by 1849. Canal boats carried agricultural goods and timber downstream and moved supplies and equipment upstream for a thriving gold mining industry. New railways, however, cut into the navigation company's markets and gold strikes in California drew mining activity to the West. In 1854-55, the Fredericksburg Water Power Company acquired this under-used canal and converted it to a raceway. As a power canal, it remained in use into the 1960s, feeding 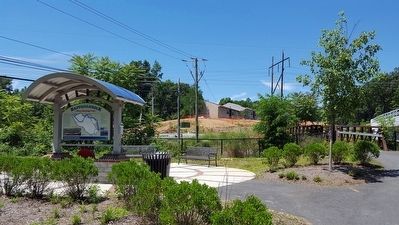 The once prominent Klotz Throwing Company (also known as the Virginia Silk Mills) is site “L” on the map. Though reduced to a single story structure, some of its architectural features remain evident.

Location. 38° 18.988′ N, 77° 29.135′ W. Marker is in Fredericksburg, Virginia. Marker can be reached from the intersection of Fall Hill Avenue (Virginia Route 639) and Normandy Avenue, on the right when traveling north. Located at the parking lot for the River Heritage Trail. Touch for map. Marker is in this post office area: Fredericksburg VA 22401, United States of America. Touch for directions.