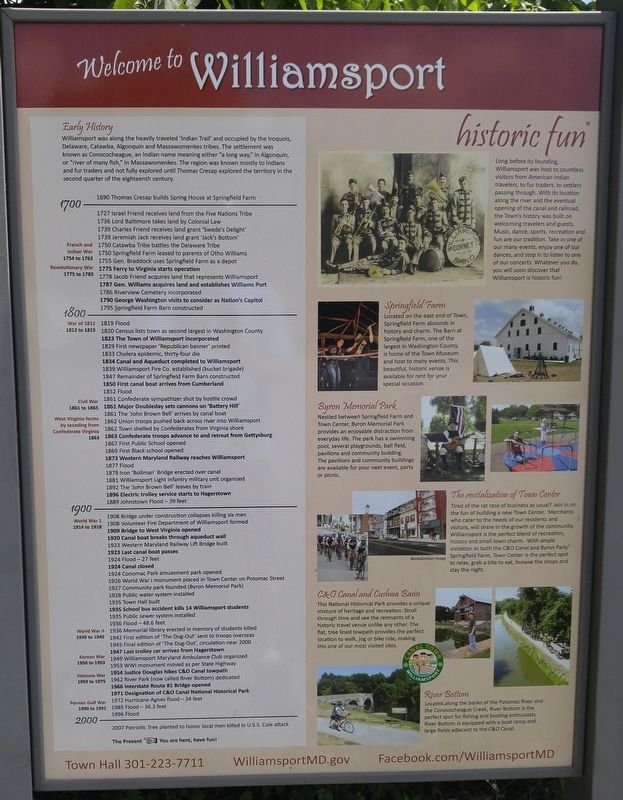 Early History
Williamsport was along the heavily traveled "Indian Trail" and occupied by the Iroquois, Delaware, Catawba, Algonquin and Massawomenkes tribes. The settlement was known as Conococheague, an Indian name meaning either "a long way," in Algonquin, or "river of many fish," in Massawomenkes. The region was known mostly to Indians and fur traders and not fully explored until Thomas Cresap explored the territory in the second quarter of the eighteenth century. 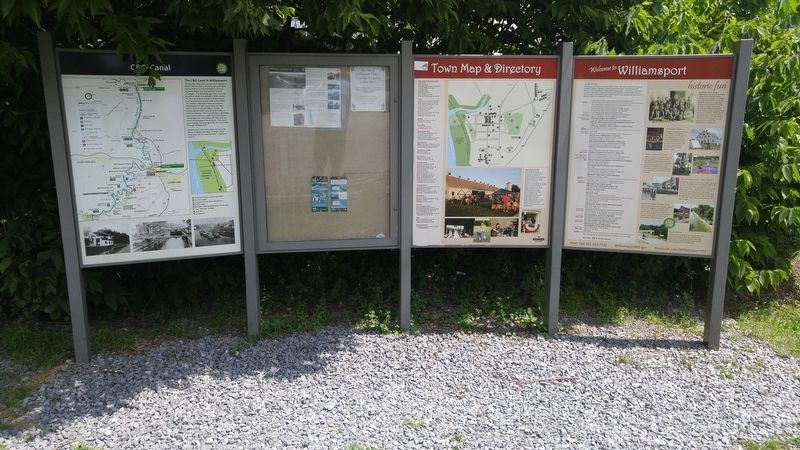 Photographed By F. Robby, June 29, 2016
4. Welcome to Williamsport Marker
This marker is the on the right in this cluster of four.
before its founding, Williamsport was host to countless visitors from American Indian travelers, to fur traders, to settlers passing through. With its location along the river and the eventual opening of the canal and railroad, the Town's history was built on welcoming travelers and guests. Music, dance, sports, recreation and fun are our tradition. Take in one of our many events, enjoy one of our dances, and stop in to listen to one of our concerts. Whatever you do, you will soon discover that Williamsport is historic fun!

Springfield Farm
Located on the east end of Town, Springfield Farm abounds in history and charm. The Barn at Springfield Farm, one of the largest in Washington County, is home of the Town Museum and host to many events. This beautiful, historic venue is available for rent for your special occasion.

Byron Memorial Park
Nestled between Springfield Farm and Town Center, Byron Memorial Park provides an enjoyable distraction from everyday life. The park has a swimming pool, several playgrounds, ball field, pavilions and community building. The pavilions and community buildings are available for your next event, party or picnic.

The revitalization of Town Center
Tired of the rat race of business as usual? Join in on the fun of building a new Town Center. Merchants who cater to the needs of our residents 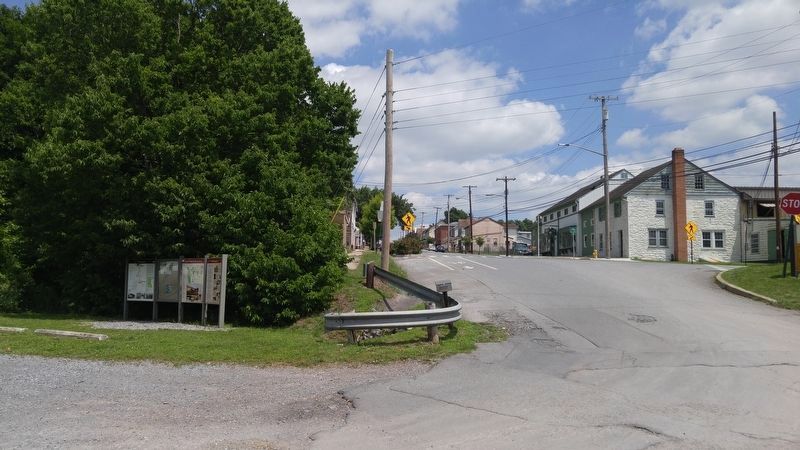 Photographed By F. Robby, June 29, 2016
5. Welcome to Williamsport Marker
View east, up Potomac Street toward the center of town.
and visitors, will share in the growth of the community. Williamsport is the perfect lend of recreation, history and small town charm. With ample visitation to both the C&O Canal and Byron Park/Springfield Farm, Town Center is the perfect spot to relax, grab a bite to eat, and browse the shops and stay the night.

C&O Canal and Cushwa Basin
The Nationals Historic Park provides a unique mixture of heritage and recreation. Stroll through time and see the remnants of a historic travel venue unlike any other. The flat, tree lined towpath provides the perfect location to walk, jog or bike ride, making this one of our most visited sites.

River Bottom
Located along the banks of the Potomac River and Conococheague Creek, River Bottom is the perfect spot for fishing and boating enthusiasts, River Bottom is equipped with a boat ramp and large fields adjacent to the C&O Canal.

Topics. This historical marker is listed in these topic lists: Railroads & Streetcars • Settlements & Settlers • War, US Civil • Waterways & Vessels. A significant historical year for this entry is 1690.

Location. 39° 36.033′ N, 77° 49.556′ W. Marker is in Williamsport, Maryland, in Washington County. Marker can be reached from the intersection of Potomac Street (U.S. 11) and Commerce Street. Marker is just within the parking area for the C&O Canal National Historic Park, on the right side about 25 feet from the intersection. Touch for map. Marker is in this post office area: Williamsport MD 21795, United States of America. Touch for directions.