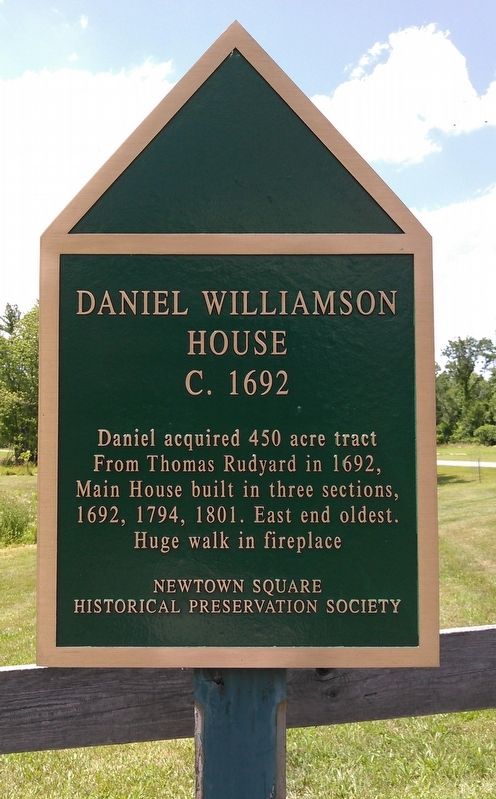 Topics and series. This historical marker is listed in these topic lists: Architecture • Colonial Era. In addition, it is included in the Pennsylvania, Newtown Square Historical Preservation Society series list. A significant historical year for this entry is 1692.

Location. 39° 58.445′ N, 75° 24.994′ W. Marker is in Newtown Township, Pennsylvania, in Delaware County. Marker is on Bishop Hollow Road, on the right when traveling west. Touch for map. Marker is in this post office area: Newtown Square PA 19073, United States of America. Touch for directions.

Additional commentary.
1. History of Williamson and his House
Daniel Williamson came to the area near Crum Creek from the village of Stretton in Cheshire, England as one of the areas earliest settlers. He was a Quaker and left to escape the religious persecution going on there from the time before he was born. (1665) Daniels lineage lends to an ongoing “sister town” relationship with that town in England, and Newtown Township, Delaware County, Pennsylvania. Near the end of his life Williamson, was involved in county government and was a member of the Assembly representing Chester County, at the time of his death in 1727.

The house as the marker states is actually three structures joined at common walls. The central section of the Daniel Williamson House is constructed of vertical timbers, while the other two side sections are of stone. Both field 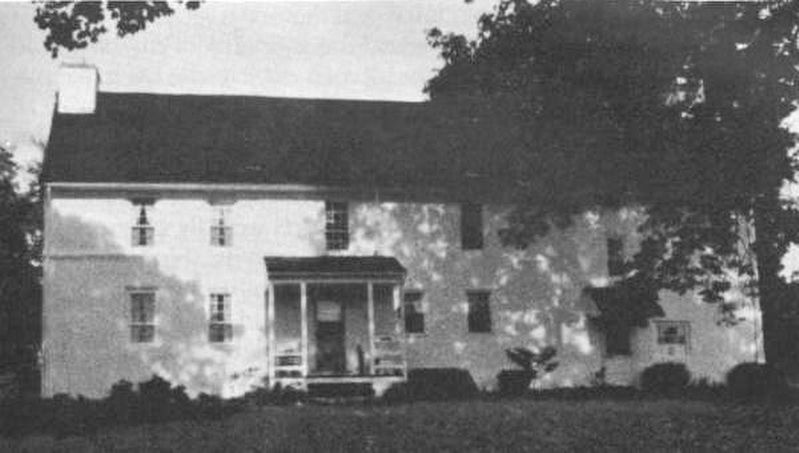 Delaware County Historical Society
3. Daniel Williamson House
stone structures as well as the wood center section are all covered over with stucco, making it seem as a continuous structure. The oldest section of the house is the fieldstone section on the right, and it is likely the oldest surviving house in Newtown Township. This ancient first section contains only two rooms one on top of the other, and an attic. The first floor room has a small north facing window, and a large walk in fireplace. The wooden center section has vertical planks that were likely milled in Daniel’s saw mill on Crum Creek. The newest stone section was built in 1801, and attached to the south side of the timber section. Three separate massive chimneys break up the common roof line. The house still sits astride the slope of the Garrett-Williams estate with a commanding view of the sheep and other livestock of the 4H farm that now calls the area its home.
— Submitted July 22, 2016, by Keith S Smith of West Chester, Pennsylvania.
Credits. This page was last revised on December 30, 2020. It was originally submitted on July 21, 2016, by Keith S Smith of West Chester, Pennsylvania. This page has been viewed 724 times since then and 56 times this year. Photos:   1, 2, 3. submitted on July 21, 2016, by Keith S Smith of West Chester, Pennsylvania. • Bill Pfingsten was the editor who published this page.
Share this page.