Common Ground for Many Soldiers

Many Troops Pass Through DeValls Bluff 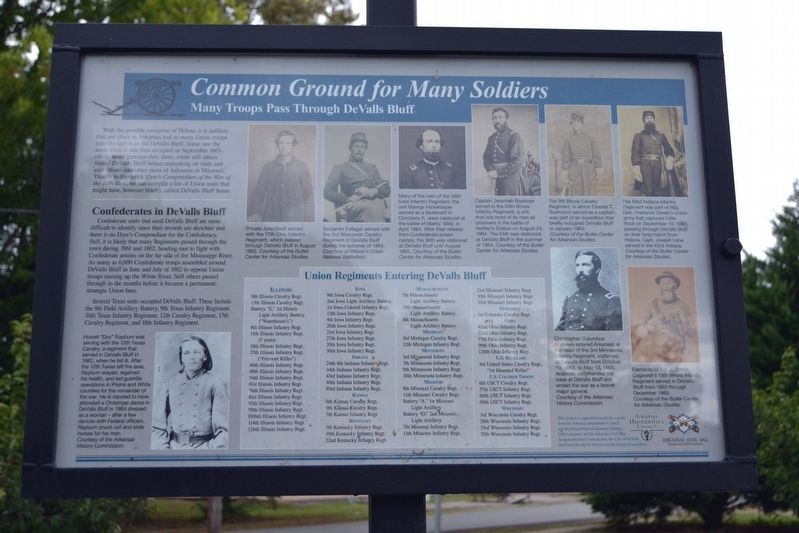 With the possible exception of Helena, it is unlikely that any place in Arkansas had as many Union troops pass through it as did DeValls Bluff. Some saw the town when it was first occupied in September 1863, others stood garrison duty there, while still others visited DeValls Bluff before embarking on raids and expeditions into other parts of Arkansas or Missouri. Thanks to Frederick Dyer’s Compendium of the War of the Rebellion, we can compile a list of Union units that might have, however briefly, called DeValls Bluff home.

Confederate units that used DeValls Bluff are more difficult to identify since their records are sketchier and there is no Dyer’s Compendium for the Confederacy. Still, it is likely that many Regiments passed through the town during 1861 and 1862, heading east to fight with Confederate armies on the far side of the Mississippi River. As many as 6,000 Confederate troops assembled around DeValls Bluff in June and July of 1862 to oppose Union troops moving up the White River. Still others passed through in the months before it became a permanent, strategic 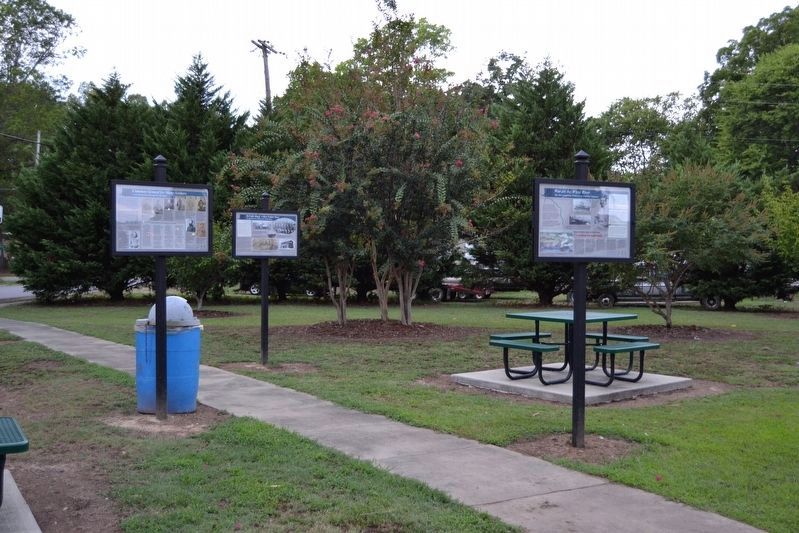 Photographed By Duane Hall, July 30, 2016
2. Civil War Interpretive Signs in the Center of Rhodes Park
Common Ground for Many Soldiers marker is on the left

Click or scan to see
this page online
Union base. 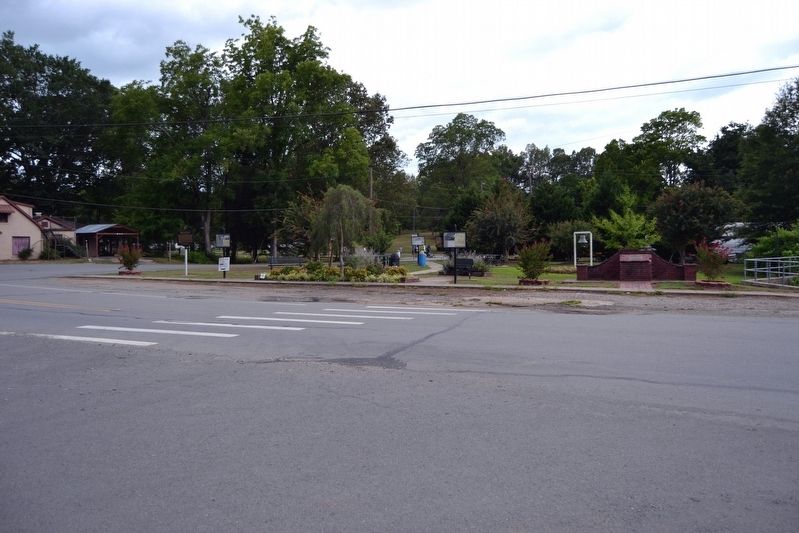 
(Portrait Images Captions)
Howell “Doc” Rayburn was serving with the 12th Texas Cavalry, a regiment that served in DeValls Bluff in 1862, when he fell ill. After the 12th Texas left the area, Rayburn stayed, regained his health, and led guerrilla operations in Prairie and White counties for the remainder of the war. He is reputed to have attended a Christmas dance in DeValls Bluff in 1864 dressed as a woman — after a few dances with Federal officers, Rayburn snuck out and stole horses for his men. Courtesy of the Arkansas History Commission

Private John Graff served with the 77th Ohio Infantry Regiment, which passed through DeValls Bluff in August 1863.Courtesy of the Butler Center for Arkansas Studies.

Benjamin Fullager served with the 3rd Wisconsin Cavalry Regiment in DeValls Bluff during the summer of 1864. Courtesy of Wilson’s Creek National Battlefield.

Many of the men of the 36th Iowa Infantry Regiment, the unit George Hickenloper served as a lieutenant in Company K. were captured at the battle of Marks’ Mills in April 1864. After their release from Confederate prison camps, the 36th was stationed at DeValls Bluff until August 1865. Courtesy of the Butler Center for Arkansas Studies.

Captain Jeremiah Boatman served in the 54th Illinois Infantry Regiment, a unit that lost most of its men as prisoners in the battle of Ashley’s Station on August 24, 1864. The 54th was stationed at DeValls Bluff in the summer of 1864. Courtesy of the Butler Center for Arkansas Studies.

The 9th Illinois Cavalry Regiment, in which Charles T. Scammon served as a captain, was part of an expedition that briefly occupied DeValls Bluff in January 1863. Courtesy of the Butler Center for Arkansas Studies.

The 43rd Indiana Infantry Regiment was part of Maj. Gen. Frederick Steele’s Union army that captured Little Rock on September 10, 1863, passing through DeValls Bluff on their long march from Helena. Capt. Joseph Lane served in the 43rd Indiana. Courtesy of the Butler Center for Arkansas Studies.

Christopher Columbus Andrews entered Arkansas at the head of the 3rd Minnesota Infantry Regiment, stationed at DeValls Bluff from October 10, 1864, to May 13, 1865. Andrews commanded the base at DeValls Bluff and ended the war as a brevet major general. Courtesy of the Arkansas History Commission.

Topics. This historical marker is listed in these topic lists: African Americans • War, US Civil. A significant historical year for this entry is 1861.

Location. 34° 47.049′ N, 91° 27.534′ W. Marker is in DeValls Bluff, Arkansas, in Prairie County. Marker can be reached from the intersection of Main Street (State Highway 33) and Prairie Avenue, on the right when traveling south. Touch for map. Marker is in this post office area: De Valls Bluff AR 72041, United States of America. Touch for directions.