The Burns House / A Brief History of the Garfield Place 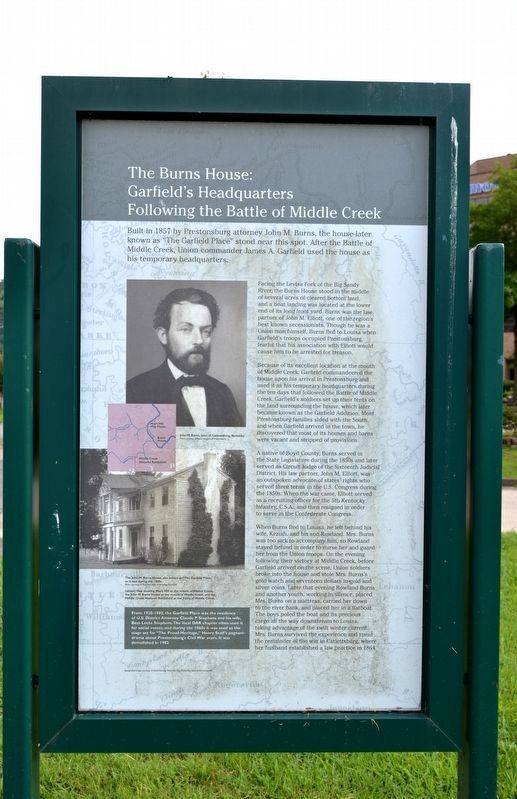 (Side One)
The Burns House:
Garfield’s Headquarters Following the Battle of Middle Creek

Built in 1857 by Prestonsburg attorney John M. Burns, the house later known as “The Garfield Place” stood near this spot. After the Battle of Middle Creek, Union commander James A. Garfield used the house as his temporary headquarters.

Facing the Levisa Fork of the Big Sandy River, the Burns House stood in the middle of several acres of cleared bottom land, and a boat landing was located at the lower end of its long front yard. Burns was the law partner of John M. Elliott, one of the region’s best known secessionists. Though he was a Union man himself, Burns fled to Louisa when Garfield’s troops occupied Prestonsburg, fearful that his association with Elliott would cause him to be arrested for treason.

Because of its excellent location at the mouth of Middle Creek, Garfield commandeered the house upon his arrival in Prestonsburg and used it as his temporary headquarters during the ten days that followed the Battle of Middle Creek. Garfield’s soldiers set up their tents on the land 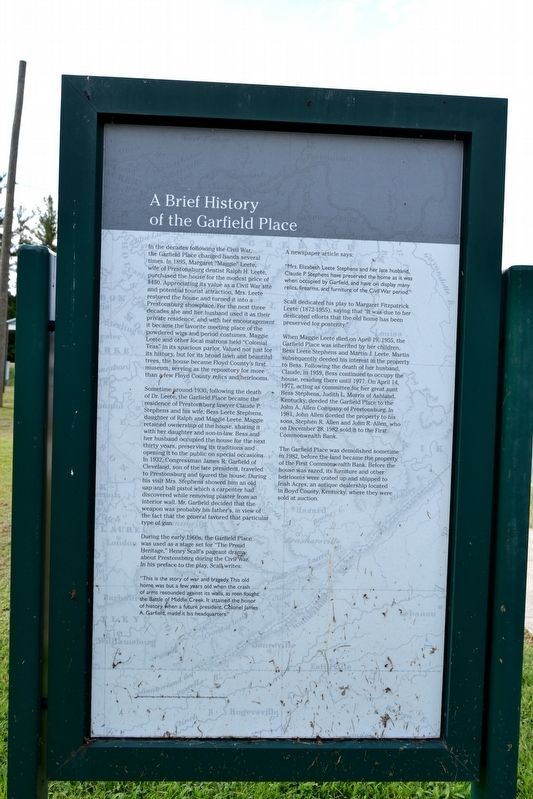 Photographed By Duane Hall, August 4, 2016
2. The Burns House / A Brief History of the Garfield Place Marker
Side Two

Click or scan to see
this page online
surrounding the house, which later became known as the Garfield Addition. Most Prestonsburg families sided with the South, and when Garfield arrived in the town, he discovered that most of its houses and barns were vacant and stripped of provisions.

A native of Boyd County, Burns served in the State Legislature during the 1850s and later served as Circuit Judge of the Sixteenths Judicial District. His law partner, John M. Elliott, was an outspoken advocate of states’ rights who served three terms in the U.S. Congress during the 1850s. When the war came, Elliott served as a recruiting officer for the 5th Kentucky Infantry, C.S.A., and then resigned in order to serve in the Confederate Congress.

When Burns fled to Louisa, he left behind his wife, Keziah, and his son Rowland. Mrs. Burns was too sick to accompany him, so Rowland stayed behind in order to nurse her and guard her from the Union troops. On the evening following their victory at Middle Creek, before Garfield arrived on the scene, Union soldiers broke into the house and stole Mrs. Burns’s gold watch and seventeen dollars in gold and silver coins. Later that evening Rowland Burns and another youth, working in silence, placed Mrs. Burns on a mattress, carried her down to the river bank, and placed her in a flatboat. The boys poled the boat and its precious cargo all the way downstream to Louisa, taking 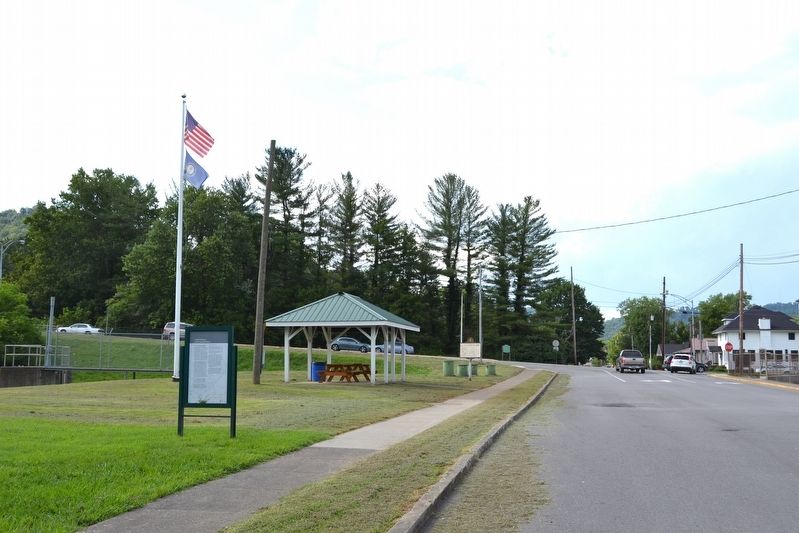 Photographed By Duane Hall, August 4, 2016
3. The Burns House / Garfield Place and Morgan's Last Raid Markers
Markers on left (west) side of N. Arnold Avenue
advantage of the swift winter current. Mrs. Burns survived the experience and spent the remainder of the war in Catlettsburg, where her husband established a law practice in 1864.

(Side One Inset)
From 1930-1960, the Garfield Place was the residence of U.S. District Attorney Claude P. Stephens and his wife, Bess Leete Stephens. The local DAR chapter often used it for social events, and during the 1960s it was used as the stage set for “The Proud Heritage,” Henry Scalf’s pageant-drama about Prestonsburg’s Civil War years. It was demolished in 1982.

(Side Two) A Brief History of the Garfield Place

In the decades following the Civil War, the Garfield Place changed hands several times. In 1895, Margaret “Maggie” Leete, wife of Prestonsburg dentist Ralph H. Leete, purchased the house for the modest price of $450. Appreciating its value as a Civil War site and potential tourist attraction, Mrs. Leete restored the house and turned it into a Prestonsburg showplace. For the next three decades she and her husband used it as their private residence, and with her encouragement it became the favorite meeting place of the powdered wigs and period costumes. Maggie Leete and other local matrons held “Colonial Teas” in its spacious parlor. Valued not just for its history, but for its broad lawn and beautiful 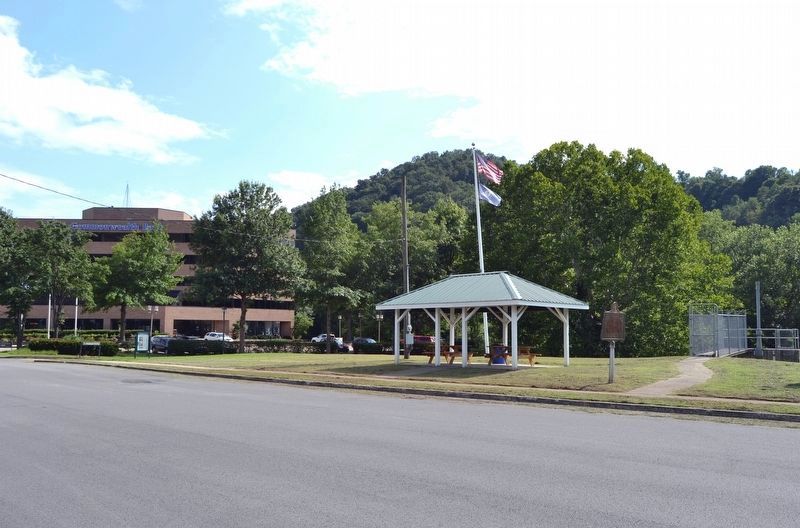 Sometime around 1930, following the death of Dr. Leete, the Garfield Place became the residence of Prestonsburg lawyer Claude P. Stephens and his wife, Bess Leete Stephens, daughter of Ralph and Maggie Leete. Maggie retained ownership of the house, sharing it with her daughter and son-in-law. Bess and her husband occupied the house for the next thirty years, preserving its traditions and opening it to the public on special occasions. In 1932, Congressman James R. Garfield of Cleveland, son of the late president, traveled to Prestonsburg and toured the house. During his visit Mrs. Stephens showed him an old cap and ball pistol which a carpenter had discovered while removing plaster from an interior wall. Mr. Garfield decided that the weapon was probably his father’s, in view of the fact that the general favored that particular type of gun.

During the early 1960s, the Garfield Place was used as a stage set for “The Proud Heritage,” Henry Scalf’s pageant drama about Prestonsburg during the Civil War. In his preface to the play, Scalf writes:

“This is a story of war and tragedy. This old home was but a few years old when the crash of arms resounded against its walls, as men fought the Battle of Middle Creek. It attained the honor of history when a future president, Colonel James A. Garfield, made it his headquarters.”

“Mrs. Elizabeth Leete Stephens and her late husband Claude P. Stephens have preserved the home as it was when occupied by Garfield, and have on display many relics, firearms, and furniture of the Civil War period.”

Scalf dedicated his play to Margaret Fitzpatrick Leete (1872-1955), saying that “It was due to her dedicated efforts that the old home has been preserved for posterity.”

When Maggie Leete died on April 19, 1955, the Garfield Place was inherited by her children, Bess Leete Stephens and Martin J. Leete. Martin subsequently deeded his interest in the property to Bess. Following the death of her husband, Claude, in 1959, Bess continued to occupy the house, residing there until 1977. On April 14, 1977, acting as committee for her great aunt Bess Stephens, Judith L. Morris of Ashland, Kentucky, deeded the Garfield Place to the John A. Allen Company of Prestonsburg. In 1981, John Allen deeded the property to his sons, Stephen R. Allen and John R. Allen, who on December 28, 1982 sold it to the First Commonwealth Bank.

The Garfield Place was demolished sometime in 1982, before the land became the property of the First Commonwealth Bank. Before the house was razed, its furniture and other heirlooms were crated up and shipped to Irish Acres, an antique dealership located in Boyd County, Kentucky, where they were sold at auction.

Topics. This historical marker is listed in this topic list: War, US Civil. A significant historical year for this entry is 1857.

Location. 37° 40.216′ N, 82° 46.583′ W. Marker is in Prestonsburg, Kentucky, in Floyd County. Marker is on N. Arnold Avenue south of Kentucky Highway 114, on the left when traveling north. Touch for map. Marker is in this post office area: Prestonsburg KY 41653, United States of America. Touch for directions.