The Martin County Guards / Never to be Forgotten 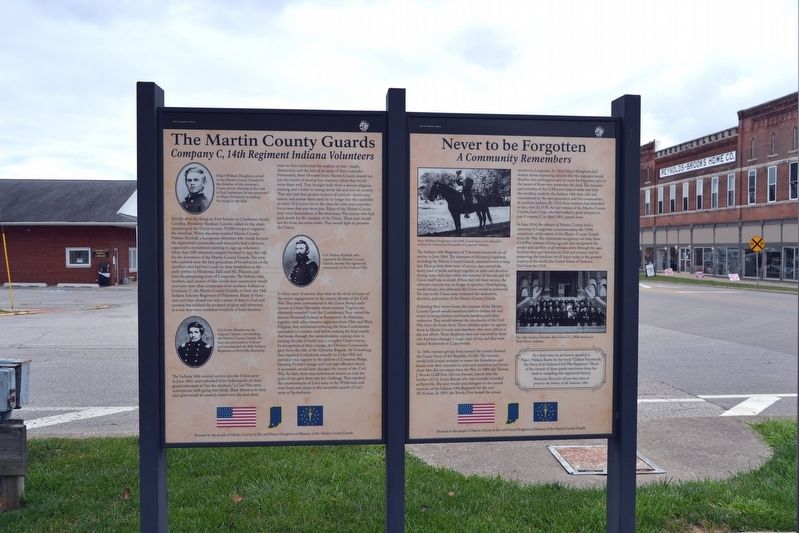 Shortly after the firing on Fort Sumter in Charleston, South Carolina, President Abraham Lincoln called for the states remaining in the Union to raise 75,000 troops to suppress the rebellion. When the news reached Martin County, Nathan Kimball, a Loogootee physician who would become the regimental commander and ultimately lead a division, organized a recruitment meeting to sign up volunteers. More than 100 volunteers stepped forward to sign the rolls for the formation of the Martin County Guards. The men who enlisted were the first generation of beneficiaries of the sacrifices that had been made by their forefathers as the early settlers in Hindostan Falls and Mt. Pleasant, and later the prospering town of Loogootee. The fathers, sons, brothers, and cousins of this closely-knit community would soon join nine other companies from southern Indiana as Company C, the Martin County Guards, to form the 14th Indiana Infantry Regiment of Volunteers. Many of these men and boys shared not only a sense of duty to God and 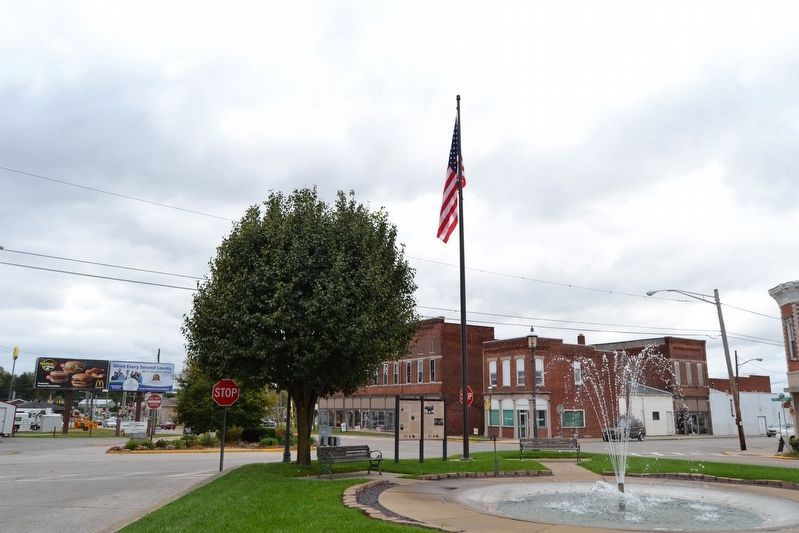 Photographed By Duane Hall, October 13, 2016
2. Marker at Park in Downtown Loogootee
View to southwest with marker at northeast corner of intersection of US 231 and Main Street

Click or scan to see
this page online
country, but relished the prospect of glory and adventure in a were they were confident would be of brief duration.

The Indiana 14th entered service into the Union army in June 1861, and embarked from Indianapolis on their grand adventure to “see the elephant,” a Civil War term synonymous with going into battle. Their devotion to duty and spirit would be severely tested over the next three years as they confronted the realities of war–death, destruction, and the loss of so many of their comrades. Fortunately, these Hoosiers from Martin County shared not just the bonds of kinship but common values that would serve them well. They brought with them a devout religious training and a belief in strong family life and love of country. They also had that pioneer instinct of survival–know your enemy and pursue them until he no longer has the capability to resist. If it is your lot to die, then die with your comrades for a cause that you deem just. Many of the Martin County boys were descendants of Revolutionary War heroes who had paid dearly for the creation of the Union. These men would not let those ancestors down. They would fight to preserve the Union.

In three years of service, they were in the thick of many of the engagements in the eastern theatre of the Civil War. They were instrumental in the Union Army’s early success at Cheat Mountain where western Virginia was ultimately wrestled from the Confederacy. They routed the famous Stonewall Jackson at Kernstown. At Antietam, together with other western regiments from Ohio and West Virginia, they withstood withering fire from Confederates concealed in a sunken road before making the final assault that broke through the entrenchments, coming close to turning the tide of battle into a complete Union victory. In recognition of their courage, the Division Commander gave them the title of the Gibraltar Brigade. At Gettysburg, they repulsed Confederate assaults on Culp’s Hill and provided vital support to the defense of Cemetery Ridge, blunting Pickett’s charge and Lee’s last offensive which, if successful, would have changed the course of the Civil War. As their three-year enlistments neared an end, the gods of war gave them one last challenge. They repulsed the counterattacks of Lee’s army at the Wilderness and were front and center in the successful assault of Lee’s army at Spotsylvania.

(Upper Left Portrait Caption)
Major William Houghton served in the Martin County Guards for the duration of the company’s 3-year service. Starting at the rank of 2nd Lieutenant, he was promoted to Major for bravery in leading his troops in the field.


(Right Panel)
Never to be Forgotten
A Community Remembers

The Indiana 14th Regiment of Volunteers mustered out of service in June 1864. The remnants of this proud regiment, including the Martin County Guards, returned home at long last. During their three years of service, they carried the heavy load of battle and kept together in spirit and devotion during many dark days when the outcome of the war and the Union itself was in doubt. When they left their service, the ultimate outcome was no longer in question. Hard fighting would remain, but ultimately the Union would be preserved. No unit in the Union army surpassed the dedication, devotion, and service of the Martin County Guards.

Following their return home, the veterans of the Martin County Guards would transition back to civilian life and return to being farmers, merchants, bankers, and other endeavors. They would witness the conclusion of the Civil War from the home front. These veterans spoke out against those in Martin County and elsewhere who were critical of the war efforts. These dissidents were not tolerated by those who had been through 3 tough years of war and they were labeled Butternuts or Copperheads.

In 1866, veterans groups from around the country formed the Grand Army of the Republic (GAR). The veterans would hold annual reunions to renew their friendships and bonds with their comrades in arms and remember and honor those who did not return from the War. In 1889, the Thomas J. Brooks GAR Post 322 was formed, named after the brother of Col. Lewis Brooks who was mortally wounded at Perryville. The post would send delegates to the annual reunions of the Indiana 14th Regiment for the next 20-30 years. In 1895, the Brooks Post hosted the annual reunion in Loogootee. In 1864, Major Houghton had written home expressing concern that the regiment would dissolve into nothingness and its name be forgotten, save in the hearts of those who remember the dead. The reunions and activities of the GAR posts helped make sure that the sacrifices made by the Indiana 14th were told and remembered by the next generation and the communities in southern Indiana. By 1922, their numbers had dwindled to but a few. In 1938, the last veteran of the Martin County Guards, Isaac Crim, who had walked a great distance to join Company C in April 1861, passed away.

In June 2014, the citizens of Martin County held a ceremony in Loogootee commemorating the 150th anniversary of the return of the Martin County Guards from the War. The ceremonies recognized not only those Civil War veterans of long ago, but also recognized the service and sacrifice of all veterans down through the ages for their duty and devotion to God and country and for preserving the freedoms we all enjoy today in the greatest country in the world, the United States of America. God bless the USA!

As a final note, we are forever grateful to Nancy Niblack Baxter for her book “Gallant Fourteenth, The Story of an Indiana Civil War Regiment.” Much of the content of these panels was drawn from her work in compiling this regimental history. Thank you Nancy for all you have done to preserve the history of the Indiana 14th.

Topics. This historical marker is listed in these topic lists: Fraternal or Sororal Organizations • War, US Civil. A significant historical month for this entry is June 1861.

More about this marker. The marker exhibit was “Donated to the people of Martin County by Jim and Nancy Houghton in Memory of the Martin County Guards”.