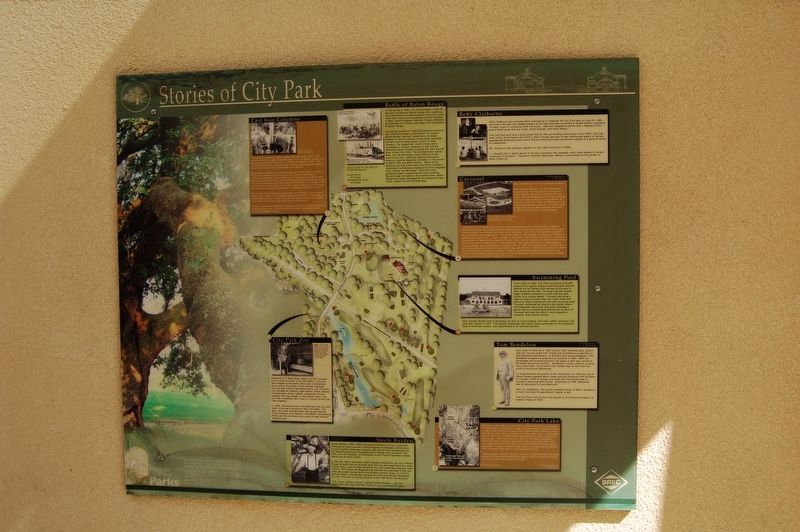 Cast Iron Columns
The cast-iron columns which supported the former Picnic Hill pavilion structure were originally part of an old Baton Rouge market pavilion that was built in 1859 and razed in 1954.The columns have been salvaged and are now supporting the copper bowl luminaries at the promenade entry points.
Many Baton Rouge citizens who grew up in the 1950's and 60's have fond memories of the Picnic Hill pavilion that these columns supported. This pavilion was a spot that provided many family and group picnics and Brownie of Cub Scout outings. During that era, there were still many places that weren't air conditioned and the Picnic Hill pavilion provided a place where one could get out of the sun and enjoy an oasis of shade in which to cool off.
Picnic Hill itself offered a great place for children to run up and down, play chase, or to use the swings and slides. There was no interstate overpass at that time, so the area of City Park known as Picnic Hill had an unbroken vista to the south.
Unlike its previous condition of fences and other physical barriers along its west side, Picnic Hill is now better connected to all 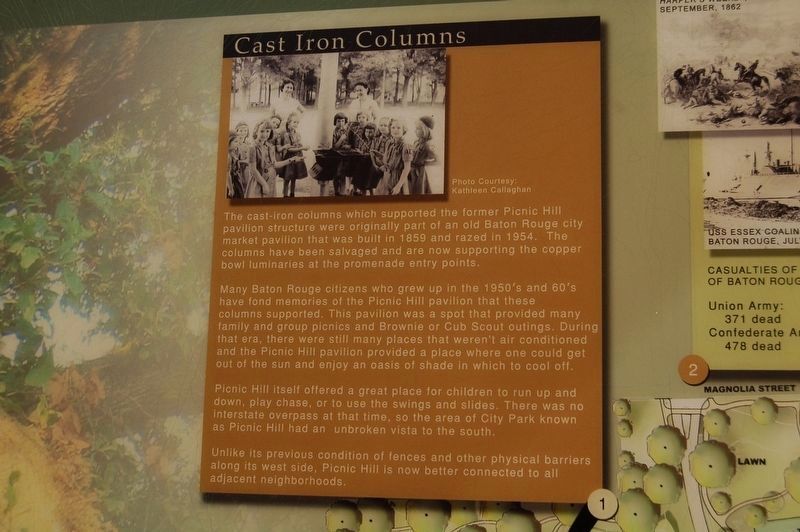 Click or scan to see
this page online
adjacent neighborhoods.

Battle of Baton Rouge
In the spring of 1862, the Confederates made the decision to abandon Baton Rouge after realizing the overwhelming threat posed by the Union Army from their victory and occupation of New Orleans. In May, Union Brigadier General Thomas Williams arrived with his infantry and began the occupation of Baton Rouge.

During the summer of 1862, Confederate General Earl Van Dorn made a commitment to reclaim Baton Rouge, feeling it would be a strategic location to launch attacks along Union occupied territory and threaten Union control of New Orleans. On August 5th, Union troops were encamped in various locations in and around downtown Baton Rouge including the area around what is now City Park. The Confederates, led by Gen. John Breckinridge, were lined up to the north of the city. Intensive fighting took place mostly near Magnolia Cemetery at the corner of North 19th and Main Streets. Some of the fighting took that place near City Park included a Louisiana Confederate brigade and Union brigades from Indiana and Michigan. After the Union gunboats began supporting the Union infantry, Breckinridge retreated to the Comite River. Baton Rouge was badly damaged by this battle and was never retaken by the Confederates.
Casualties of the Battle of Baton Rouge:
Union Army:
371 dead
Confederate Army;
478 dead 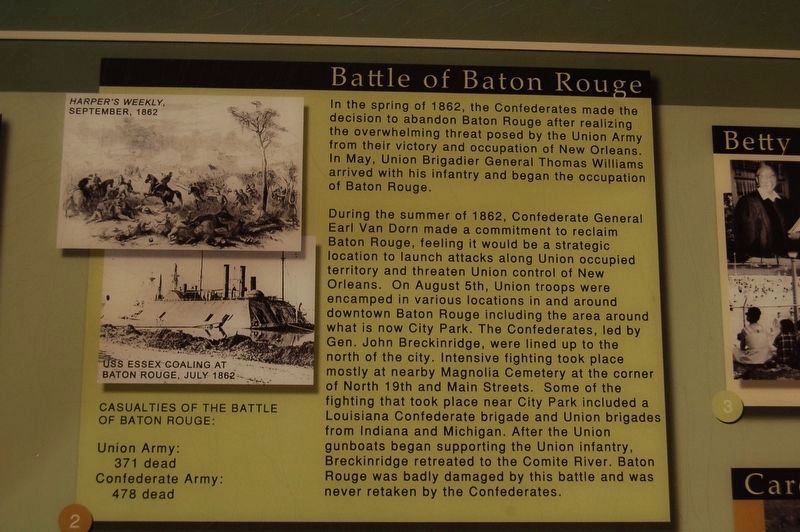 October 21, 2016
3. Stories of City Park Marker
Battle Of Baton Rouge
Claiborne
Betty Claiborne was arrested while attempting to integrate the City Park pool on July 23, 1963. She was a 20-year old college student at the time and was convicted of simple battery, spending 10 days in jail in connection with the arrest. She was stopped by police and a lifeguard in the pool's bath house with her sister, Pearl George, and three others.
The City Park pool was a busy social hub for the surrounding community in the 1960's, but like most of the South before the 1970's, Baton Rouge was part of the unfortunate legacy of racially segregated swimming pools where African-Americans were sometimes subject to a general sense of unwelcome.
Ms. Claiborne was granted a pardon for the 1963 conviction in 2005.
"...I thought that it would speak to the way Louisiana has changed, and it also speaks to certain injustices of the past" - Governor Kathleen Babineaux Blanco, commenting on the pardon of Betty Claiborne.

Carousel
Who remembers the Flying Horse Building?
Bartholomew Murphy, an Irish immigrant, brought City Park's popular carousel to Baton Rouge. Murphy, a wood carver by trade, was employed by the famed Charles Looff carousel factory on Long Island. At the turn of the 19th century Murphy and his Looff flying horses came to Louisiana, first to Spanish Fort in New Orleans and later in 1927 to City Park in Baton Rouge.
Complete 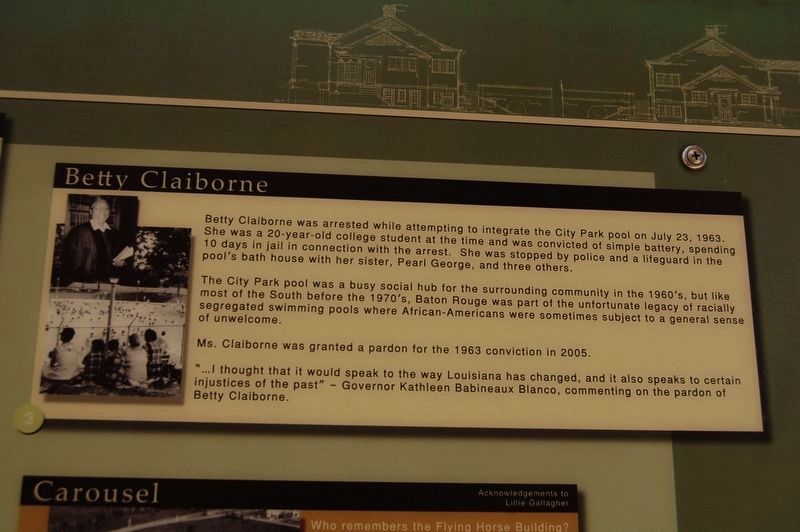 October 21, 2016
4. Stories of City Park Marker
Betty Claiborne
with a brass organ played with air pressure and controlled by cardboard sheet music, the City Park carousel was big. There were 54 hand-crafted horses and three chariots for mothers to sit with their children. Half of the horses were jumpers, the remainder were stationary. Those who rode on the outside horses got a chance to grab for the brass ring.....and if caught, a free ride. Tickets were a nickle for children and a dime for adults. Each year in the fall when school started, the horses were stored in the loft above the Murphy's living quarters. The Carousel House, a large pagoda style building, was converted to a skating rink. In 1943 the predecessor to BREC took over the building and used it for a clubhouse until the mid 1950s when it was torn down and replaced by a brick gymnasium. However Bartholomew Murphy's and Charles Looff's famed flying horses survived to ride another day at Pontchartrain Beach in New Orleans and then at New Orleans City Park.

Swimming Pool
From 1930 to 1964, City Park contained a 20,000 square foot, lagoon shaped swimming pool located behind the Art Gallery that served as the pool's bath house at the time. The pool's gently sloped edges allowed swimmers to walk into the pool similar to a natural beach. The pool was quite a sight on many summer days as it was filled with scores of youth cooling off from the Louisiana heat. The pool 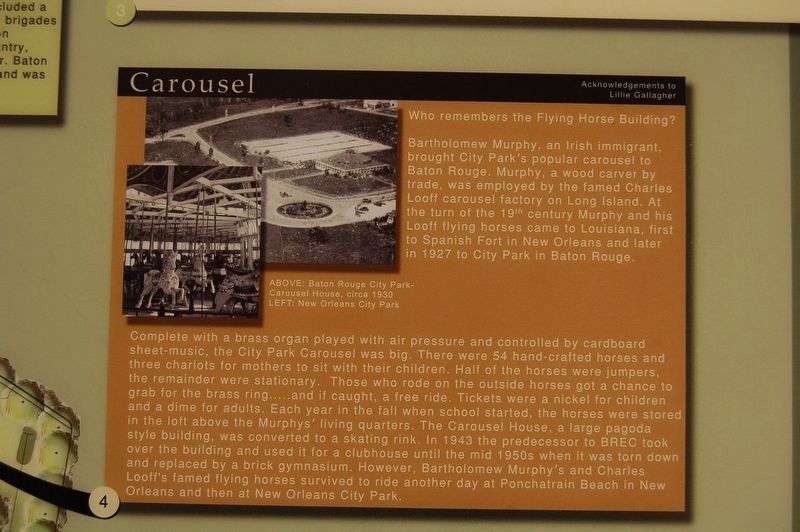 October 21, 2016
5. Stories of City Park Marker
Carousel
contained an island in the center where lifeguards stood duty and which teenagers would use as a challenging destination to swim to. The pool was also site to many pageants, contests, and summer events.
After several deaths due to drowning, as well as overcrowding, and other safety concerns, the pools was closed in 1964. The painful challenges that racial issues presented at this turbulent time in American history, also contributed to its ultimate closure.

Tom Bendelow
Golf came to America in 1890 and by 1930 American golf, golfers and golf courses grew from virtual non-existence to a position of international preeminence. A Scottish golf course designer, Tom Bendelow brought his expertise to America in 1894. With his knowledge and pioneering spirit, the game of golf was carried to 30 states across the country. Bendelow's career came to a close forty years later, at the end of the Golden Age of Golf with the onset of the Great Depression.
To accommodate the growth in the community, in 1926 the City of Baton Rouge engaged Myron West and the American Park Builders of Chicago (APB) to design and build City Park which was to include a nine-hole golf course. Employed by APB, Bendelow was an advocate for municipal golf.
After its completion, the course enabled scores of Baton Rougeons to learn and play the gentlemen's game of golf.
The City Park Golf Course 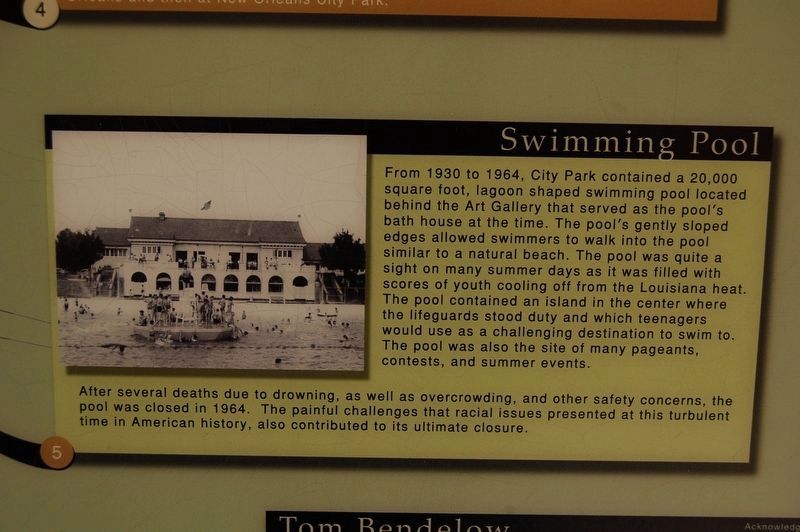 October 21, 2016
6. Stories of City Park Marker
Swimming Pool
was placed on the National Register of Historic Places in 2001.

City Park Lake
City Park Lake took on a new life in 1926 when the City decided to build a park at the lake's edge. The lake was originally created in 1925 when 60 acres of the much larger Perkins Swamp (now University Lake) were cut down and filled with water. A dike was built on what is now May Street separating City Park Lake from the swamp. The first section of what is now East Lakeshore Drive was built along the east and north sides of the lake. The road separated the main lake from a small body of water called Lake Erie. It also created a loop around the lake that included a then unnamed road that is now Dalrymple Drive.
Today, joggers, walkers, cyclists, golfers, fishermen and motorists enjoy the urban oasis and visual beauty that City Park Lake and the rest of the lake system provides.

Steele Burden
Steele Burden (1900-1995) referred to himself as "only a yard man". Although he never earned a formal degree in landscape architecture, he was a gifted landscape designer who will long be remembered for his beautiful plantings throughout Baton Rouge and Louisiana: City Park, the LSU Campus, the Shadows-on-the-Teche Plantation in New Iberia and at Avery Island.
In the late 1920's and early 1930's, Burden worked for the City of Baton Rouge at which time he planted what are now 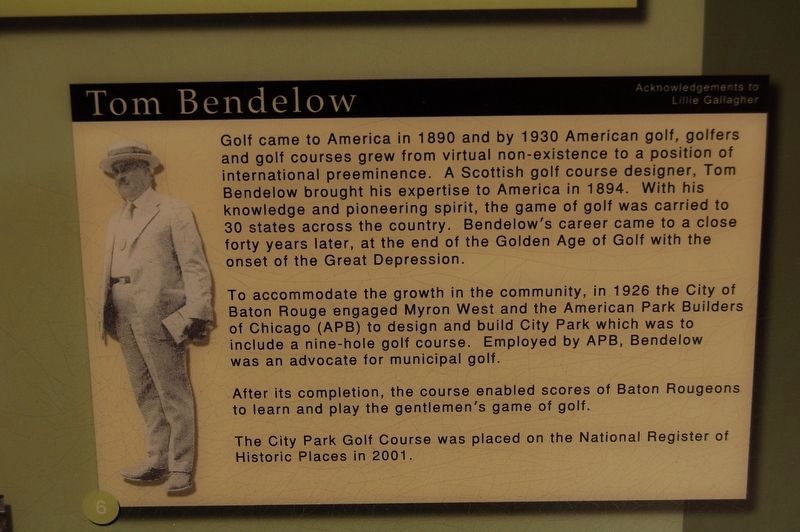 October 21, 2016
7. Stories of City Park Marker
Tom Bendelow
the magnificent live oaks at City Park. Later Burden served as the LSU landscape designer from 1932-1970 where he designed and oversaw the plantings of the live oaks and crepe myrtles within the original campus areas. In 1970 he and his sister, Ione Burden, donated the 450-acre Burden Plantation to LSU. This is now the location of the LSU Rural Life Museum.
"I'm an ordinary person" claimed Steele Burden.......but the community will long remember him as a truly extraordinary man.

City Park Zoo
Remnants of a Black Bear cage is all that remains of this small zoo built in the mid 1930's. The zoo was located on the park's west side of Dalrymple Drive, and to the south of the railroad overpass. The zoo was home to two black bears, one of which was donated to Catholic High School. Other animals included deer, foxes, rabbits, pheasants and an alligator that was caught in the nearby lakes. The zoo had a caretaker who lived in a house on the City Park property.
In 1949, the animals were removed from the zoo and most of the zoo's structures were torn down. The deer, and other animals were sent to the Harding Field ordnance area (what is now BREC's Greenwood Park), and the two bears were sent to the New Orleans Audubon Zoo.
Photo caption - Mike I at his first home in City Park with LSU Athletic Director and trainer Mike Chambers whom the mascot is named after. 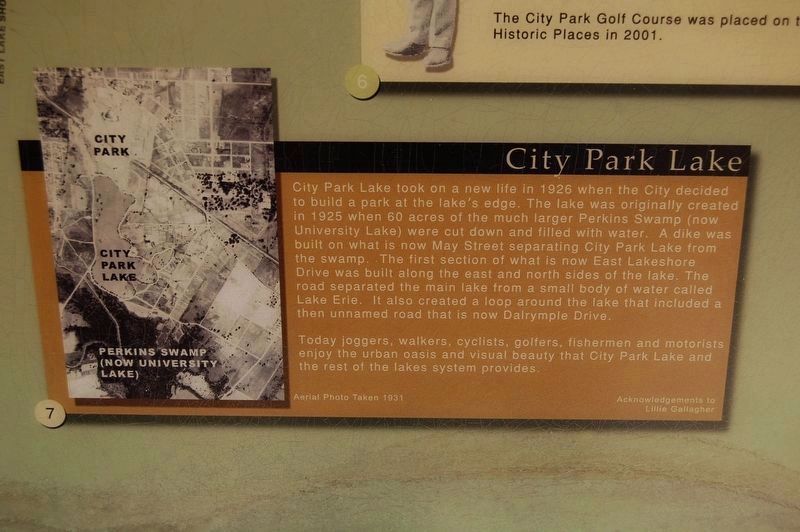 Erected by The Recreation and Park Commission for the Parish of East Baton Rouge (BREC). 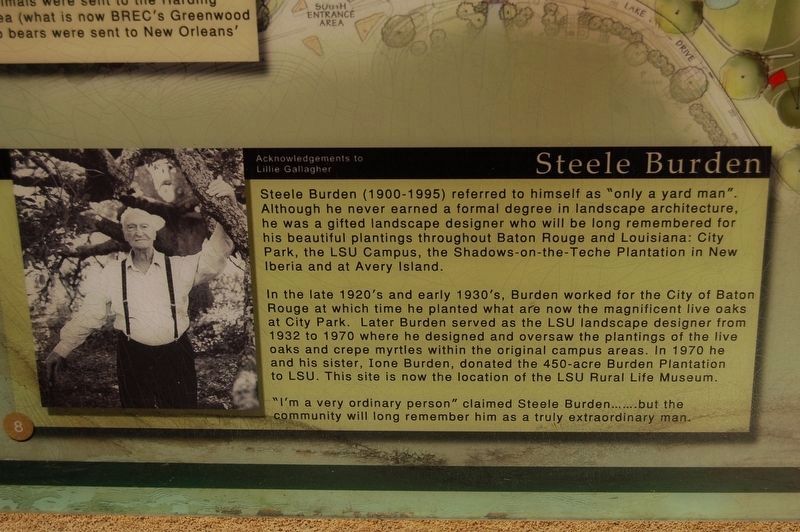 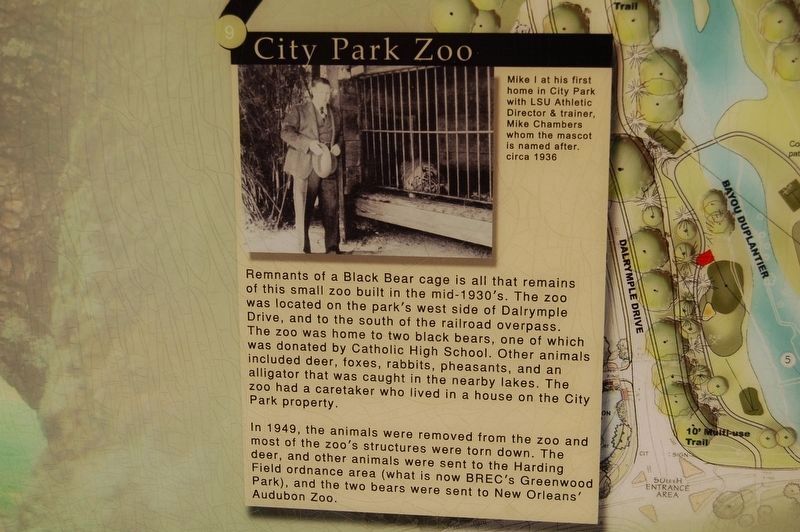 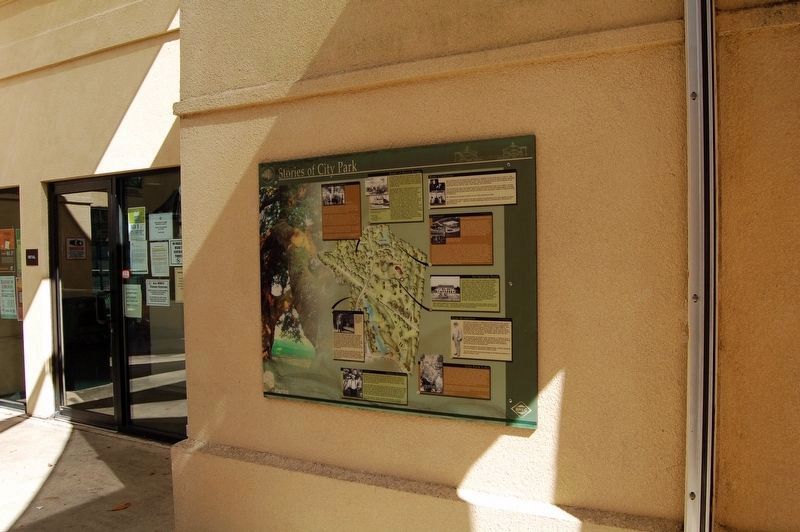