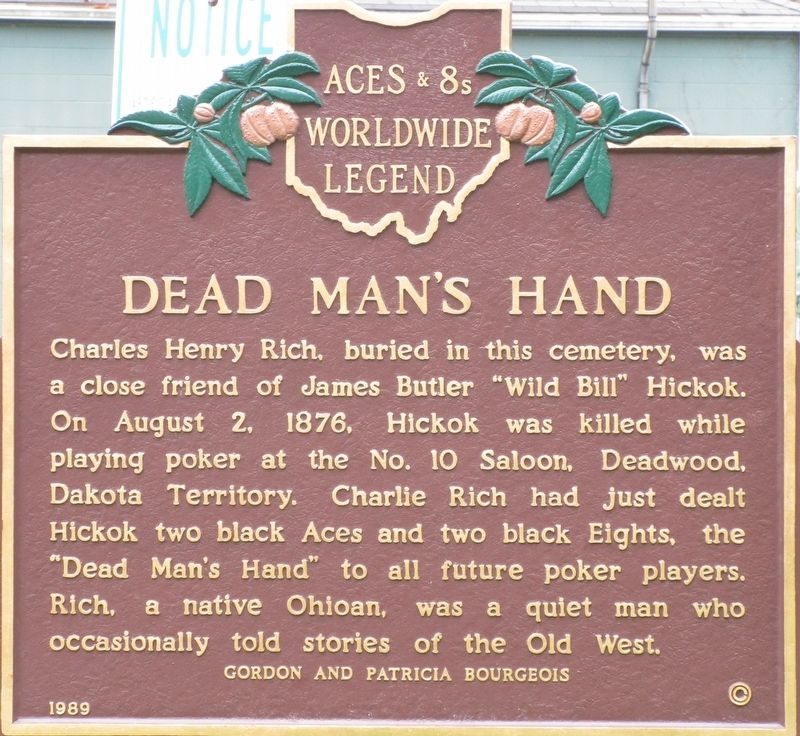 Charles Henry Rich, buried in this cemetery, was a close friend of James Butler “Wild Bill” Hickok. On August 2, 1876, Hickok was killed while playing poker at the No. 10 Saloon, Deadwood, Dakota Territory. Charlie Rich had just dealt Hickok two black Aces and two Black eights, the "Dead Man's Hand" to all future poker players. Rich, a native Ohioan, was a quiet man who occasionally told stories of the Old West.

Topics. This historical marker is listed in this topic list: Notable Events. A significant historical date for this entry is August 2, 1876. 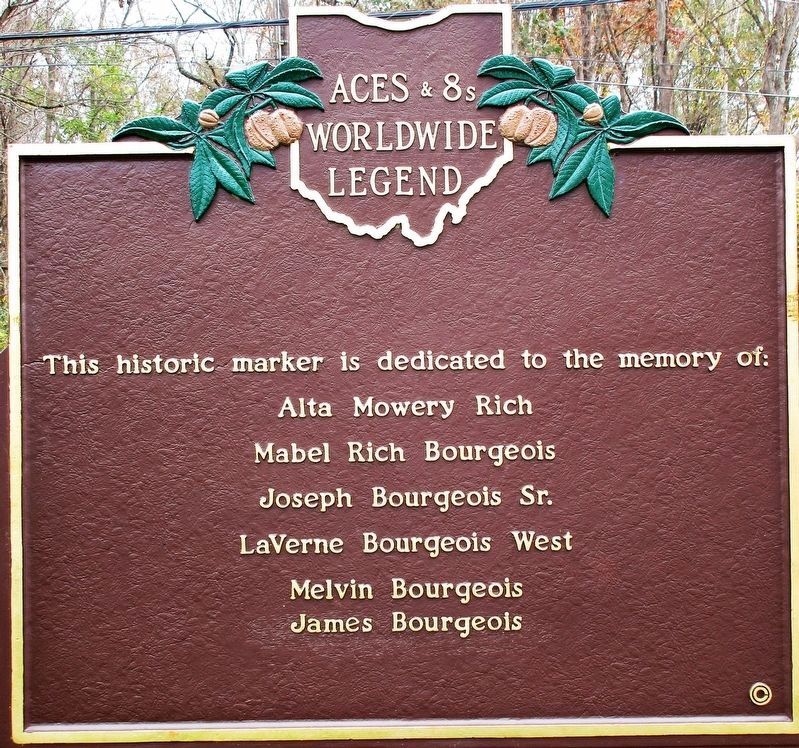 Click or scan to see
this page online
Touch for map. Marker is at or near this postal address: 220 Glendale Milford Road, Loveland OH 45140, United States of America. Touch for directions.

More about this marker. The marker shown here is not an official Ohio History Connection historical marker. But it once was. The Ohio Historical Society erected their marker No. 3-13 here in 1989. It was later permanently removed from the Ohio Historical Marker program, likely after 1996, when Hickok biographer Joseph Rosa debunked the myth.

Gordon and Patricia Bourgeois, credited as sponsors on the face of the removed marker, had the marker recast and erected as you see in these photographs. The recast marker had the Ohio Historical Marker logo replaced and the credit line changed, but the title, text, and original erection date remains the same as the original marker.

Related marker. Click here for another marker that is related to this marker. It is of a marker in Deadwood SD repeating this claim.

What is currently considered the dead man’s hand card combination received its notoriety from a legend that it was the five-card stud or five-card draw hand, held by James Butler Hickok (better known as “Wild Bill” Hickok) when he was shot in the back of the head by Jack McCall on Wednesday, August 2, 1876, in Nuttal & Mann’s Saloon at Deadwood, Dakota Territory. Hickok’s final hand purportedly included the aces and eights of both black suits.

According to a book by Western historian Carl W. Breihan, the cards were retrieved from 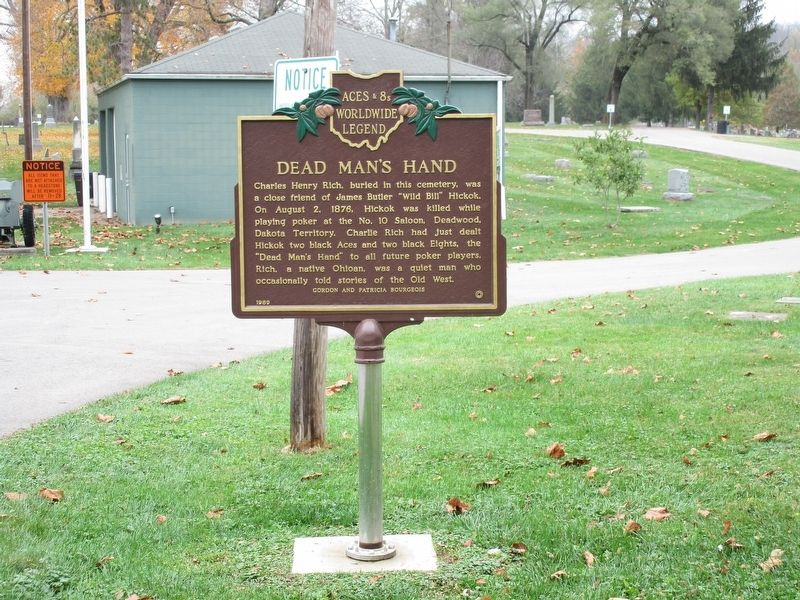 Photographed By Rev. Ronald Irick, November 4, 2016
3. Dead Man’s Hand Marker
the floor by a man named Neil Christy, who then passed them on to his son. The son, in turn, told Mr. Breihan of the composition of the hand. “Here is an exact identity of these cards as told to me by Christy’s son: the ace of diamonds with a heel mark on it; the ace of clubs; the two black eights, clubs and spades, and the queen of hearts with a small drop of Hickok's blood on it,” though nothing of the sort was reported at the time immediately following the shooting.

[In 1996] Hickok biographer Joseph Rosa wrote about the make-up of the hand: “The accepted version is that the cards were the ace of spades, the ace of clubs, two black eights, and the queen of clubs as the ‘kicker’.” Rosa, however, said that no contemporaneous source can be found for this exact hand. The solidification in gamers’ parlance of the dead man’s hand as two pairs, black aces and eights, did not come about until after the 1926 publication of Wilstach’s book—50 years after Hickok's death. 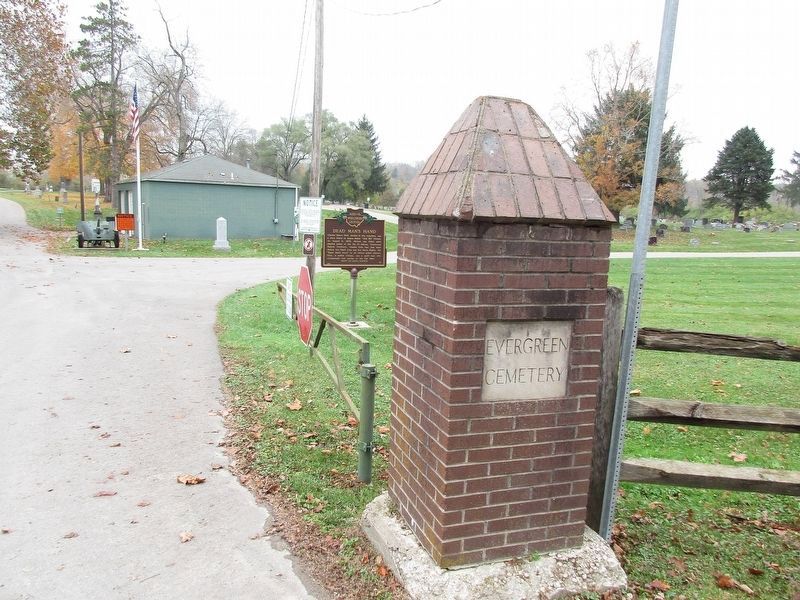 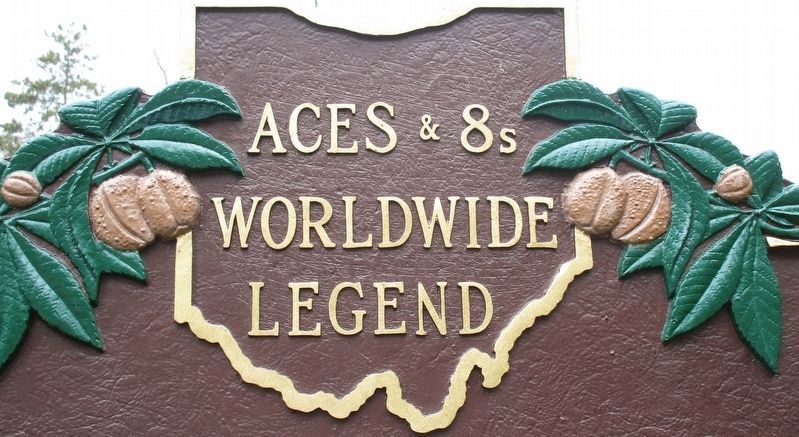 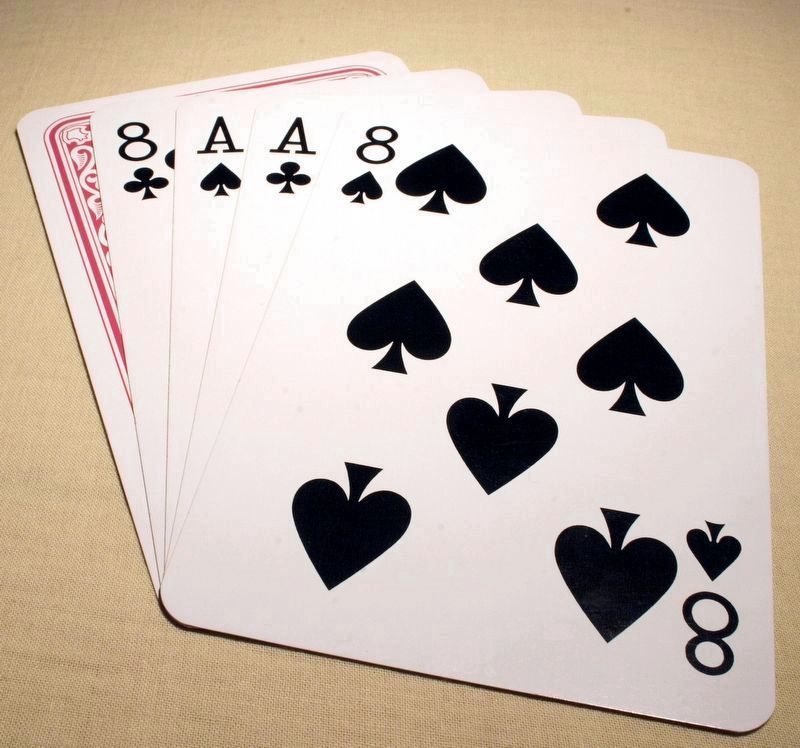 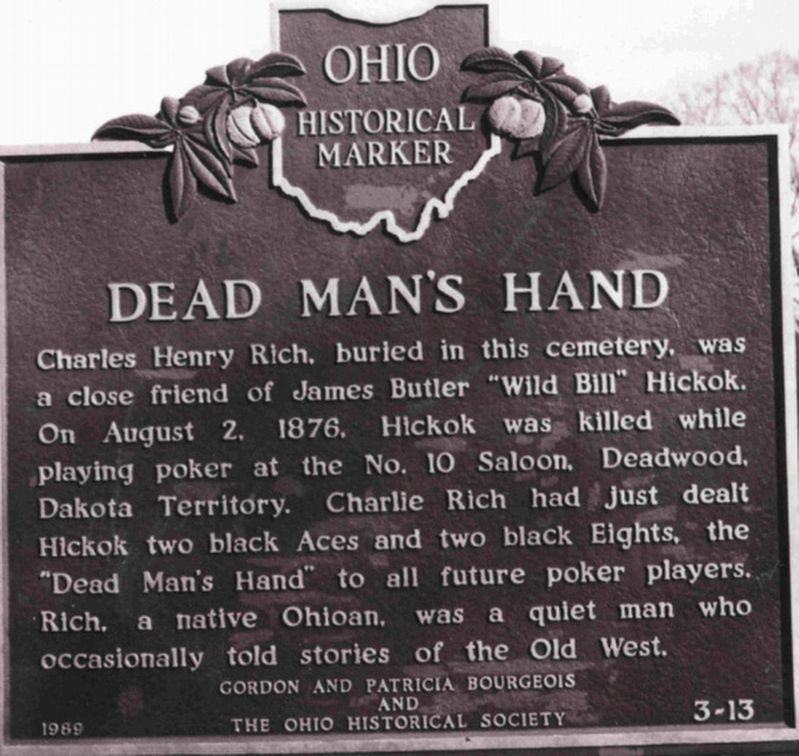