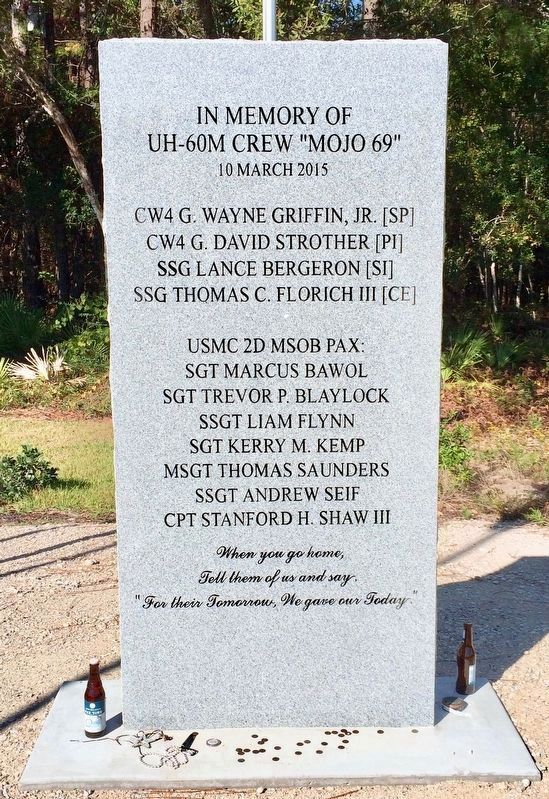 When you go home,
Tell them of us and say,
"For their Tomorrow, We gave our Today."

Erected 2016 by Gail Stangeland and other Navarre area residents. 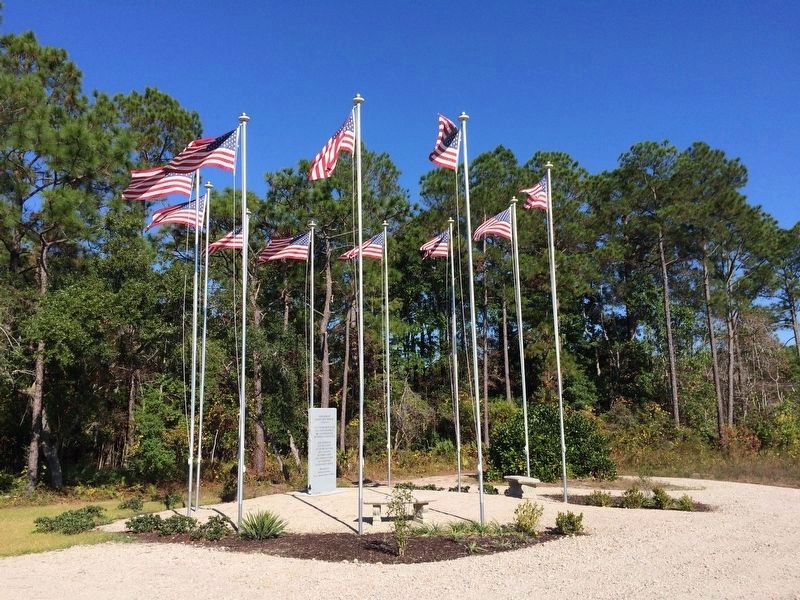 Photographed By Mark Hilton, November 17, 2016
2. "Mojo 69" Memorial not far from Navarre crash site.
Memorial is a little more than 2 miles northwest of Eglin Air Force Base site A-15 where Mojo 69 took off from.

Regarding In Memory of UH-60M Crew "Mojo 69". This Sikorsky UH-60M Black Hawk helicopter, with a crew of four Louisiana Army National Guardsmen, callsign Mojo 69, was in a flight of two that departed Eglin Air Force Base site A-15 at approximately 8:16 pm to conduct Rolled Duck (inflatable boat) and Helocast water insertion training missions involving Marine Corps Forces Special Operations Command (MARSOC) Marines and began slow movement north toward the shoreline. As the aircraft went over the waters of the Santa Rosa Sound, crew experienced degraded visual environments and tried to gain control of the helicopter. Approximately 2 min (8:21 pm) after going over water, aircraft crashed in Santa Rosa Sound about 1 statute mile north of A-15. A second UH-60 in flight was returned-to-base (RTB) and landed safely. The 7 MARSOC Marines PAX were assigned to the 2D Marine Special Operations Battalion at Camp Lejeune. 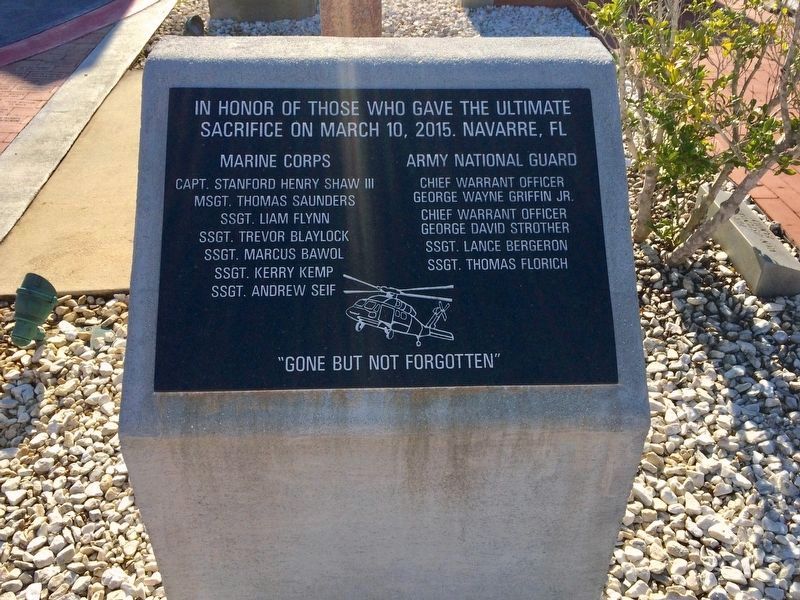 Photographed By Mark Hilton, November 17, 2016
3. Another "Mojo 69" memorial in Milton, Florida.
Located in the Santa Rosa County Veterans Memorial Plaza, some 26 miles north of this marker. Milton is the county seat of Santa Rosa County.
Investigation determined that the direct cause was spatial disorientation likely induced by the crew failing to effectively transition from visual meteorological conditions to instrument meteorological conditions in weather conditions that had lower ceilings and less visibility than they had been briefed as the minimum weather conditions authorized to conduct the mission.

Also see . . .
1. Marine Corps Times article about crash and report of causes. Includes photos of those killed in the crash. (Submitted on November 18, 2016, by Mark Hilton of Montgomery, Alabama.)

2. Memorial erected by Navarre resident. "On a small piece of land off 98 and Panhandle in Navarre, FL you might notice something new. A memorial to the Blackhawk 11. Gail Stangeland who owns the property has paid for 11 flags and a monument to remember the Blackhawk 11. Other people also helped out with the cost. They are Anderson Columbia, Mr. & Mrs. John Conner, Estephan M. Daher, Ed L. Dunn, Mr. & Mrs. Donald Enfinger, M. J. & Bill Phillips, Ava S. Powell,G. Daniel Stewart and Weaver’s Monument Co. Inc. The final installation was completed today. Members of the Remembering Blackhawk 11 are helping with plants and cleanup of the area." (Submitted on June 20, 2018, by J. Makali Bruton of Accra, Ghana.) 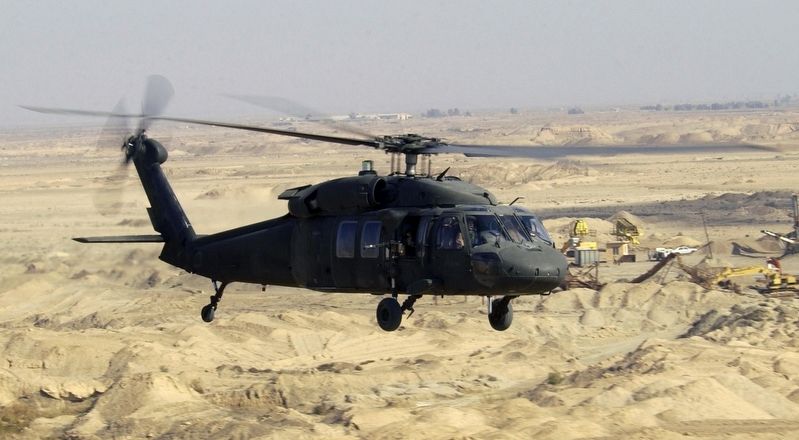