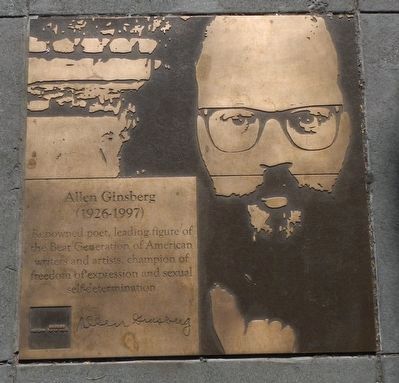 By Barry Swackhamer, November 18, 2016
1. Allen Ginsberg Marker
Inscription.
Allen Ginsberg. Renowned poet, leading figure of the Beat Generation of American writers and artists, champion of freedom of expression and sexual self-determination. . This historical marker was erected in 2014 by Rainbow Honor Walk. It is in San Francisco in San Francisco City and County California

Renowned poet, leading figure of the Beat Generation of American writers and artists, champion of freedom of expression and sexual self-determination.

Topics and series. This historical marker is listed in these topic lists: Arts, Letters, Music • Civil Rights. In addition, it is included in the Rainbow Honor Walk series list. 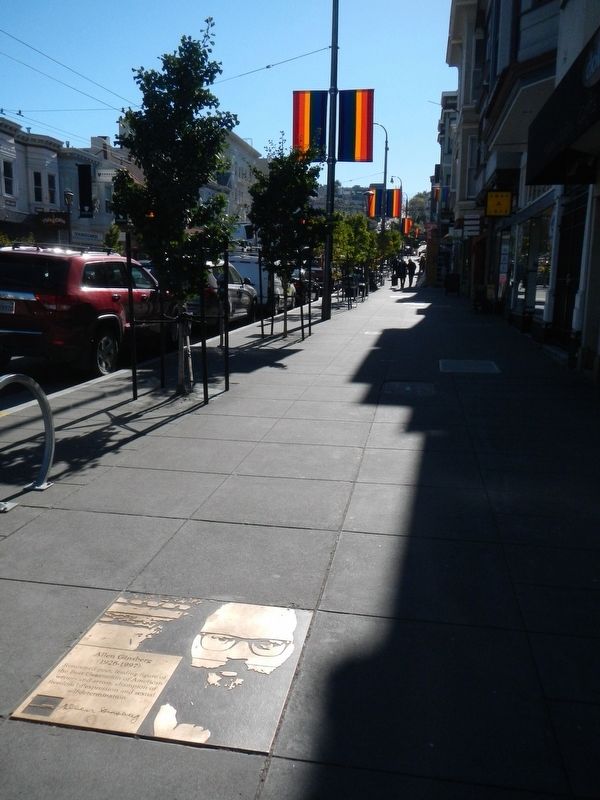 More about this marker. This marker is embedded in the sidewalk

Also see . . .
1. Allen Ginsberg - Poetry Foundation. One of the most respected Beat writers and acclaimed American poets of his generation, Allen Ginsberg enjoys a prominent place in post-World War II American culture.... Ginsberg first came to public attention in 1956 with the publication of Howl and Other Poems. “Howl,” a long-lined poem in the tradition of Walt Whitman, is an outcry of rage and despair against a destructive, abusive society. (Submitted on November 20, 2016, by Barry Swackhamer of Brentwood, California.)