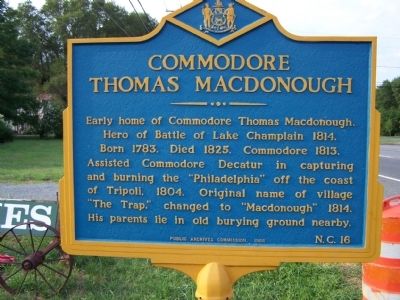 Early home of Commodore Thomas Macdonough. Hero of Battle of Lake Champlain 1814. Born 1783. Died 1825. Commodore 1813. Assisted Commodore Decatur in capturing and burning the "Philadelphia" off the coast of Tripoli, 1804. Original name of village "The Trap," changed to "Macdonough" 1814. His parents lie in old burying ground nearby.

Topics and series. This historical marker is listed in these topic lists: Cemeteries & Burial Sites • War of 1812 • Waterways & Vessels. In addition, it is included in the Delaware Public Archives series list. A significant historical year for this entry is 1814.

Other nearby markers. At least 8 other markers are within 4 miles of this marker, measured as the crow flies. McDonough Burial Ground (about 500 feet away, measured 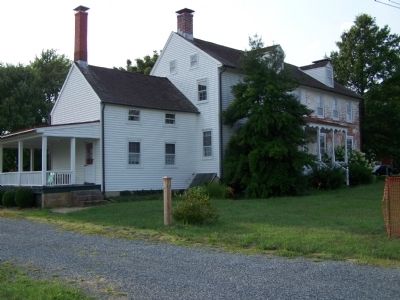 By William Pfingsten, August 10, 2008
2. Commodore Thomas Macdonough Home?
This is the house near the marker. There is no identification to indicate that it is Macdonough's home.