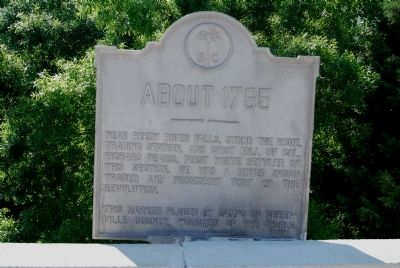 By Brian Scott, May 26, 2008
1. About 1765 Marker
Inscription.
About 1765. . Near Reedy River Falls, stood the home, trading station, and grist mill of Col. Richard Pearis, first white settler of this section. He was a noted Indian trader and prominent Tory of the Revolution. . This historical marker was erected in 1948 by Camps of Greenville County, Woodmen of the World. It is in Greenville in Greenville County South Carolina

Near Reedy River Falls, stood the home, trading station, and grist mill of Col. Richard Pearis, first white settler of this section. He was a noted Indian trader and prominent Tory of the Revolution.

Erected 1948 by Camps of Greenville County, Woodmen of the World. (Marker Number 23-4.)

Location. 34° 50.761′ N, 82° 24.077′ W. Marker is in Greenville, South Carolina, in Greenville County. Marker is on South Main Street (State Highway 124), on the left when traveling south. Marker is located on the southeast side of the bridge crossing over the Reedy River. Touch for map. Marker is in this post office area: Greenville SC 29601, United States of America. Touch for directions. 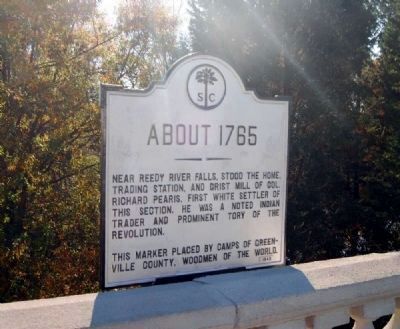 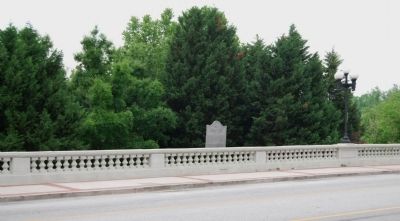 Additional comments.
1. Richard Pearis
Richard Pearis was born in Ireland and settled in Frederick county, Virginia, before 1750. At the outbreak of the Revolutionary war he was a successful planter and Indian trader on the Enoree river in South Carolina.

An orator of rude, savage eloquence and power, he commended himself to Governor Dinwiddie by his loyalty and efficiency. He became lieutenant in the Virginia Provincial regiment in 1755 and was commissioned captain in 1756 to command a company of Cherokees and Catawbas in an expedition against the Shawnee towns west of the Ohio, under Major Andrew Lewis. Pearis served under Generals Forbes, Stanwix, Monckton, and Bouquet. He was the first to enter Fort Duquesne. His military ability was apparent in his services on the borders of Maryland, Pennsylvania, and Virginia, with headquarters at Fort Pitt.

Having married a Cherokee wife, Captain Pearis acquired great influence among the Indians, and was consequently ordered south. In 1768 he was settled at the Big Canebrake, on the Reedy river, South Carolina. 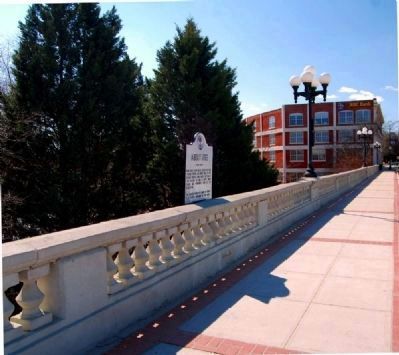 By Brian Scott, March 4, 2010
4. About 1765 Marker
Southeast Side of Main Street Bridge
Over the Reedy River
to join them, or at least to secure their neutrality. However, Pearis took part in the siege of Ninety- Six on the British side and many other actions.

In July, 1776, he was one of a party of 260 loyal militia and Indians which unsuccessfully attacked 450 "rebels" in a wooden fort.

According to his own narrative, his services to the crown in the same year include the dispersal of 700 "rebels" in the district of Ninety-Six. By the turn of fortune he was captured and consigned to Charleston jail, where he was a prisoner in irons for nine months. On his release, Pearis wended his way on foot, traversing 700 miles, to West Florida, through the settlements of the Indians, who supplied him with food. Arriving at Pensacola, he was on 13 December, 1777, commissioned captain in the West Florida loyalist refugees, by Colonel John Stuart, superintendent of Indians in the Southern Colonies, who ordered him to capture Manshac on the Mississippi river, a task which he accomplished. This corps was also engaged in the suppression of the rum trade at Mobile Bay with the northern Creek Indians. Pearis was present at the capture of Sunbury in Georgia.

The romantic tale of his exploits includes the raising of 5000 to 6000 loyalists and the disarming of all rebels from the Savannah river to Broad river, near the borders of North Carolina, as well as destroying their forts 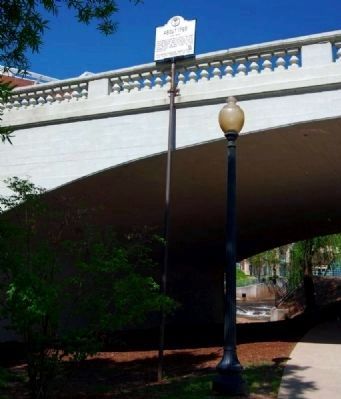 By Brian Scott, April 12, 2010
5. About 1765 Marker
From the River Walk
and capturing men, arms and ammunition. To his mortification, this series of successes was no sooner accomplished than Colonels Innes and Balfour ordered the arms and ammunition to be returned to the "rebels" and their leaders released. Incensed by this treatment, he returned to Georgia and settled his family near Augusta.

While Pearis was a prisoner at Charleston, his wife, two daughters, and a son were surprised at home by Colonel John Thomas and 400 followers, who subjected them to abuse and punishment, as well as carrying away their portable property and burning the rest. Not content, Colonel Thomas forced the family to march on foot 25 miles a day, without food and without protection for their heads from the sun. They were also confined for three days without food, and were afterwards sent off in an open wagon a ditsance of 100 miles, to shift for themselves among "a parcel of rebels," without money or provisions. For three years Captain Pearis was separated from his family, who were in daily fear of massacre by their enemies.

A son of Captain Pearis was an ensign in the West Florida Rangers.

For the loss of his real estate in South Carolina, Colonel Richard Pearis claimed £15,576. 18s. and was awarded £5,624. An account of his property has been published. The name appears also as Paris, whence Paris Mountain, near Greenville in South Carolina. 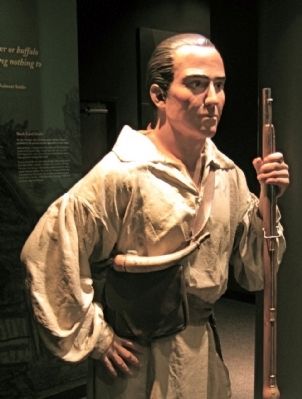