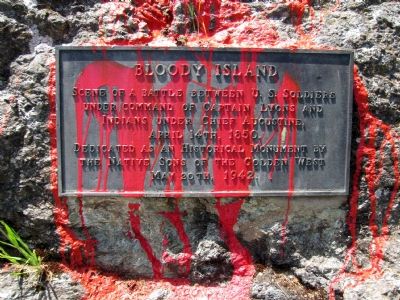 By Karen Key, April 27, 2007
1. Bloody Island Marker
Inscription.
Bloody Island. . , Scene of a battle between U.S. soldiers under command of Captain Lyons and Indians under Chief Augustine, April 14th, 1850. , , Dedicated as an historical monument by the Native Sons of the Golden West , , May 20th, 1942 , . This historical marker was erected in 1942 by Native Sons of the Golden West. It is in Upper Lake in Lake County California

Scene of a battle between U.S. soldiers under command of Captain Lyons and Indians under Chief Augustine, April 14th, 1850.


Erected 1942 by Native Sons of the Golden West.

Topics and series. This historical marker is listed in this topic list: Native Americans. In addition, it is included in the Native Sons/Daughters of the Golden West series list. A significant historical date for this entry is April 14, 1874.

Location. 39° 8.938′ N, 122° 53.621′ W. Marker is in Upper Lake, California, in Lake County. Marker is on Reclamation Road near Redbud Lane, on the right when traveling west. Touch for map. Marker is in this post office area: Upper Lake CA 95485, United States of America. Touch for directions. 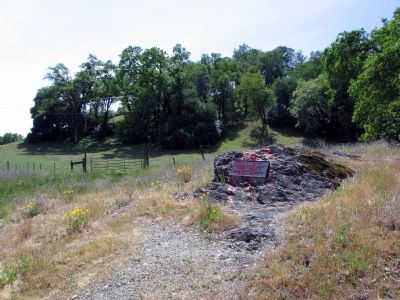